John Boehner would rather not deal with Michele Bachmann 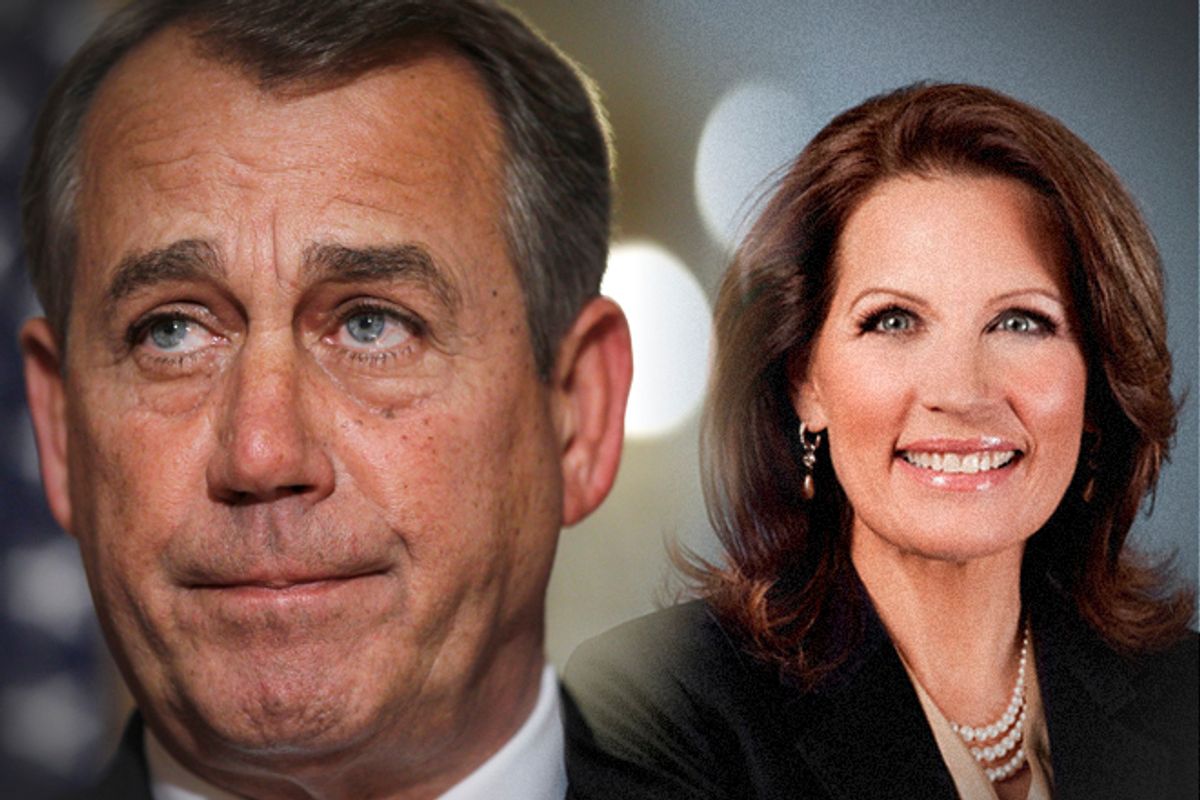 Rep. Michele Bachmann, Washington's Most Beautiful Demagogue, has an enviable seat on the House Intelligence Committee, because, after the Republicans took control of the House, Rep. John Boehner thought that would be a good idea that wouldn't end up embarrassing him and the Republican Party and the nation as a whole. Who could've predicted that Bachmann would use the position to advance dingbat conspiracy theories, seek press attention with wild accusations, and generally continue acting as Michele Bachmann has always acted?

Bachmann actually got more pushback than she probably expected when she accused Hillary Clinton adviser Huma Abedin of being in league with the nefarious Muslim Brotherhood. John Boehner said "accusations like this being thrown around are pretty dangerous," which seems to suggest that the person leveling the accusations shouldn't have a privileged position related to national security and intelligence. Bachmann is reportedly worried that her committee assignment is in jeopardy.

Here's the problem, though: The more extreme House Republicans don't actually have any respect for Majority Leader Boehner, who always wants them to do lame non-conservative stuff like "raise the debt ceiling after winning stunning concessions on entitlements from President Obama and the Democrats." Michele Bachmann, who has a huge campaign war chest and a national following, is a bit more influential with this crowd. Lots of activist conservatives think even criticizing her crusade against shadow agents of Islamofascism was cowardly and out of line.

And Robert Costa reports that Boehner is basically scared to remove her from the Intelligence Committee. That's not quite how he phrases it, but the implication is there. Boehner is sort of hoping people just stop paying attention to Bachmann so that he doesn't have to do anything about her:

Bachmann doesn’t appear ready to back down. Instead, sources tell NRO, she is working behind the scenes to generate support for her intelligence-committee post. Conservative talk-show host Glenn Beck, who has spoken with Bachmann on his program about the Abedin story, has reported that Bachmann is “facing pressure to apologize for her comments” or risk being “removed from her position.” Republican House aides roll their eyes at the Beck story. No such pressure, they say, is being exerted on the congresswoman. If anything, a third leadership source reiterates, Boehner is doing his best to avoid spending time on the Bachmann matter, publicly or privately.

Yet the general goodwill that has existed between Bachmann and Boehner for the past year seems to be gone. Bachmann, long a force during closed-door conference meetings, is now a backbencher once again, at least in the eyes of many congressional politicos. Boehner may be pressured to kick her off the committee, but with her star power fading, he doesn’t seem in any rush to make her a martyr.

Yeah, this seems like spin from Boehner. He knows he'll catch hell if he actually punishes Bachmann, and he'd just much rather focus on anything else. So he says she's embarrassed herself and no one will pay her any mind in the future, because as we all know Michele Bachmann is very concerned with not seeming like a deranged kook. Boehner's "just don't look" strategy means she doesn't actually need to worry about any repercussions for her irresponsible statements, and she will likely feel free to continue making them.