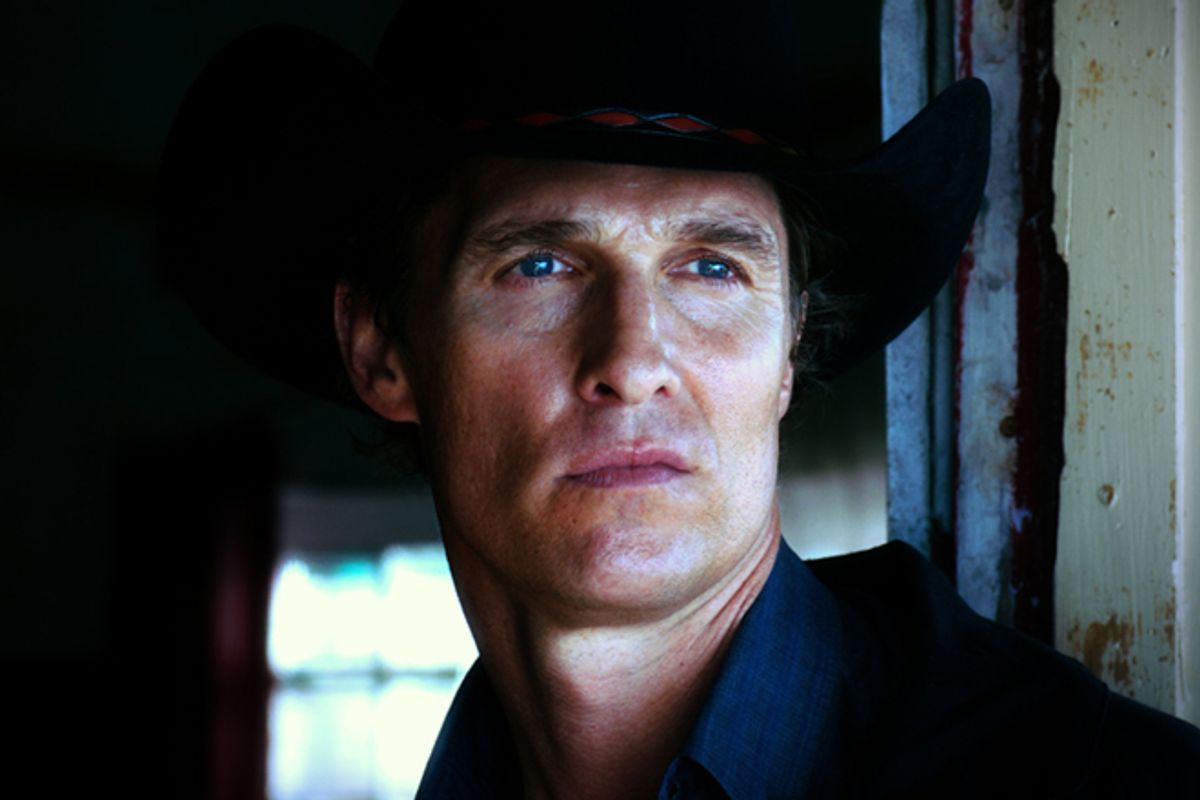 A twisted tale of crime and downscale family life in Texas built around a stunning performance by Matthew McConaughey, William Friedkin's "Killer Joe" offers both cartoonish ultraviolence and a commentary upon it, and walks a fine line between comedy, horror and realism. This is the kind of moody, murky, amoral project I generally like, with an outer coating of trashiness and some surprisingly serious issues at its core. But I feel a whole lot less comfortable praising this movie on purely technical or aesthetic grounds than I would have a week ago. Always a master manipulator, the director of "The Exorcist" and "The French Connection" here forces us to face the fact that we want to root for the bad guy, and yearn to see him destroy the stupid innocents on whom he preys. When the bad guy reveals that he's even worse than we thought, we can pretend to be shocked, but we're getting exactly what we bargained for.

I'm not claiming that "Killer Joe" sheds light on the "Dark Knight" shootings last week in Colorado in any unique fashion, but this is a movie designed to provoke discomfort about the audience's complicated psychological relationship with screen violence, and that subject has an eerie resonance right now. Friedkin, who helped pioneer the psychological thriller as a big-budget Hollywood genre, is now 76 years old and an exile from the mainstream film industry. This is his second collaboration with playwright-turned-screenwriter Tracy Letts, and like their 2006 "Bug," this film sometimes displays its theatrical roots too openly. But Friedkin's still got it -- the "it" being his ability to infuse every frame of the film with powerful ambiguity and doubt, and also his ability to attract terrific actors and propel them in unexpected directions.

Actually, the casting in "Killer Joe" is a mixed bag, as is Letts' script, which is sometimes brilliant and sometimes dialed up a bit too high. But McConaughey's performance as a suave Dallas homicide detective who moonlights as a contract killer is so dominating and intoxicating and downright poisonous that he makes up for any shortfalls. Ever since he entered his 40s and (either by accident or design) moved away from starring in Hollywood rom-coms and adventure films, McConaughey has had an extraordinary resurgence. (Let us all give thanks to audiences for saying no to overpriced flops like "Fool's Gold" and "Sahara.") But as terrific as he was in "The Lincoln Lawyer" and "Bernie" and "Magic Mike" -- and as much as I can't wait to see him in Jeff Nichols' "Mud" and Lee Daniels' "The Paperboy" -- the well-dressed, polite, admirably clear-headed and profoundly psychopathic Killer Joe Cooper might be the defining role of McConaughey's ongoing career reboot.

McConaughey has always presented himself as a laconic Texas dude who doesn't talk much about the more abstract or internal aspects of acting, but even in his rom-com roles he was always more than a pretty face, and there's no mistaking the vivid craft and finely honed timing he brings to "Killer Joe." I'm afraid McConaughey will have to work in some more respectable kinds of movies before he gets an Oscar nomination, but he deserved one for "Lincoln Lawyer" and he deserves another here. Joe seduces the redneck family who hires him to commit a murder, but more important, he seduces us. He's like a diva or a performance artist, funnier, more intelligent and more well-bred than anyone else in the movie; he can control situations with a few well-chosen words and adheres to standards of social behavior that have almost vanished from American life. In a word, he comes off as middle-class in this exurban landscape of poverty, which makes us eager to overlook the entirely evident fact that he's also a monster.

Joe comes into the life of trailer-trash deadbeat Chris Smith (Emile Hirsch, likable but a bit miscast) as a sort of clarifying force or bright light, like a North Texas version of John the Baptist wearing $500 ostrich-skin boots. This happens because Chris conceives of a not-so-brilliant scheme to clear his drug debts to a biker gang: Take out a hit on his own mother, who reportedly has a $50,000 life insurance policy payable to Chris' unhinged and virginal younger sister, Dottie (Juno Temple). Chris' easygoing but perennially broke dad, Ansel (the wonderful Thomas Haden Church, giving one of his patented American-growler turns), and his sexy, scheming stepmom, Sharla (the ever-fearless and frequently naked Gina Gershon), don't resist the idea too much, especially when offered a cut. It may not surprise you to learn that nothing about this plan works the way it's supposed to, and that nearly all these people are revealed to be craven and greedy idiots.

OK, Joe isn't an idiot, or not exactly, and Dottie isn't either. There's a strange and immediate connection between the two of them -- which begins when Joe watches Dottie practicing kung fu moves in front of the TV set -- and Joe requests Dottie as a "retainer" against the cash payment that Chris and Ansel don't have. Maybe what sparks between Joe and Dottie is just lust or loneliness or circumstance; maybe it's the blinding clarity of American idealism and American insanity. Writing about the basic plot and situation of this movie, I realize that it sounds almost exactly like a Coen brothers-style black comedy in the "Blood Simple" vein. There are similarities, but Friedkin and Letts are after something crazier and less controlled, something that veers from all-out farce to social realism to shocking brutality to unknowable mystery and even hints of the supernatural.

"Killer Joe" is frankly kind of a mess, full of loaded revolvers that never go off. But it's a mess in such an interesting way! What's the point of making clear that the neighbor's dog always barks at Chris but never barks at Joe, or that Dottie walks in her sleep and says things that suggest precognition or second sight, if those never become plot points? Why are the proposed victim and her boyfriend absent from the story? Somehow, and I can't quite say why, I'm OK with those unanswered questions. They're all part of the general atmosphere of menace and mystery that Friedkin builds around this embattled American family -- and they go along with the fact that "Killer Joe" may mock its characters ruthlessly, but never loses basic human sympathy. That's no small accomplishment when you consider that these people have hatched a plan to murder a fellow human being for a pitifully small sum of money, and are generally being dishonest with each other about it. If the story is far-fetched and dubious, in the crime-movie tradition, it nonetheless resembles the kinds of stupid things people do.

I should make clear that the climactic scene of "Killer Joe" goes to a level of Grand Guignol darkness, including a disturbing scene in which a female character is sexually humiliated and abused, that would be difficult for many audience members under any circumstances and might be especially tough right now. It's definitely meant to be upsetting, awful, comical and tough to watch, and succeeds on that level. I think the final moments of the film, which reveal both Joe and Dottie a little more and leave us hanging on a note of unresolved mystery, are brilliantly executed. Then there's the dark game that Friedkin is playing here, the same game Joe plays with the Smith family -- giving us what we want, and then asking whether it's really what we want. Whether that game justifies itself, or produces any useful answers, is a bigger question than I can answer this week.