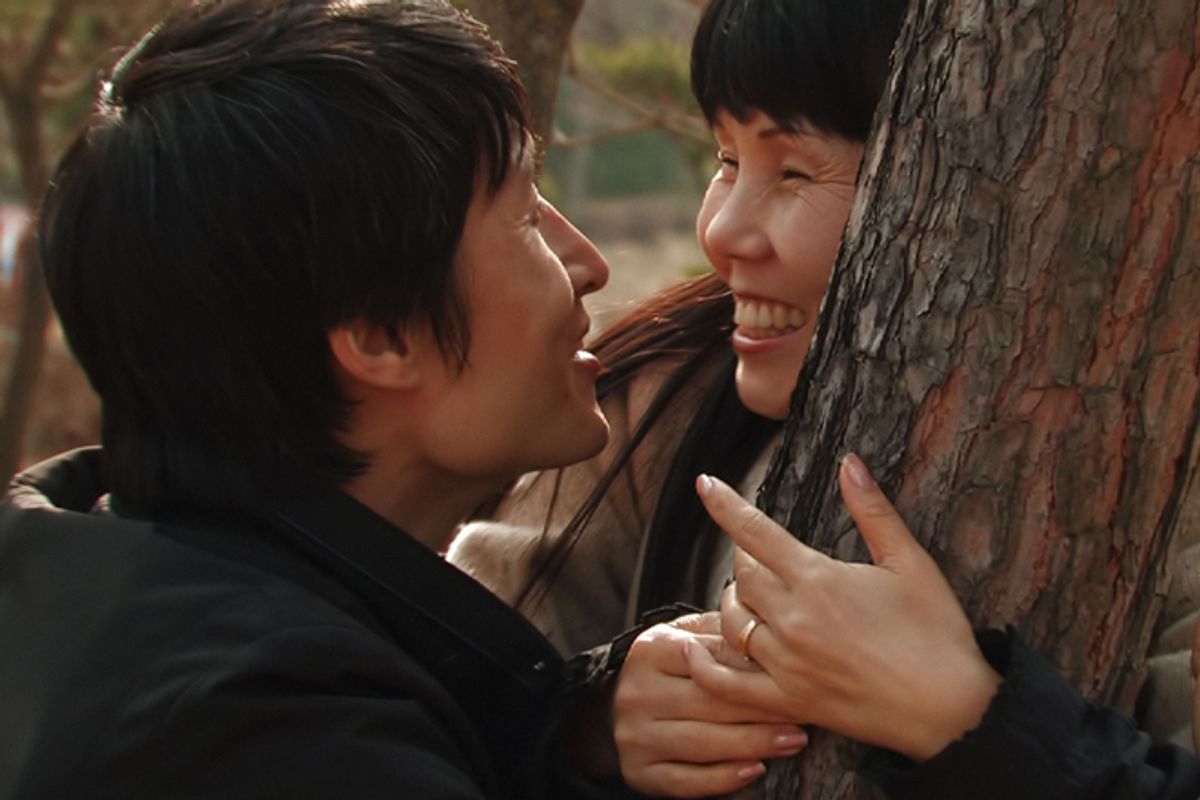 Literally and figuratively one of the quietest films you'll ever see, the award-winning Korean documentary "Planet of Snail" offers a precious moment of clarity and simplicity amid a chaotic and poisonous summer, and tells an unforgettable love story to boot. Director Yi Seung-jun's gorgeously photographed slice-of-life film is a contemplative experience, to be sure, but never a taxing or challenging one. If "Planet of Snail" implies or suggests profound questions about love and the human condition and how we think about ability and disability, it does so in 88 minutes and without sentimentality or heavy philosophy.

About halfway through the film, Young-chan and Soon-ho, the married couple at the center of "Planet of Snail," need to change an overhead fluorescent bulb in their bedroom. This task poses logistical problems for them that few of us can imagine. Soon-ho is a tiny, gnomelike person with a spinal deformity, probably less than 4 feet tall. Young-chan is a long-limbed, lanky fellow with the distracted air of an intellectual; he's easily tall enough to reach the light fixture, but he can neither see nor hear. Between them they eventually manage to get the bulb changed, with no major mishaps. It takes quite a while, since every time Young-chan gets something wrong -- a cord is in the way, or the bulb is incorrectly mounted -- Soon-ho must tug on his sleeve so he'll lower himself enough for her to offer advice by tapping on the backs of his fingers, using a system known as finger Braille or tactile sign language. They never, however, resort to the cursing or impatience or constant distraction that might attend you or me trying to do the same task much more quickly.

If you're guiltily thinking that there might be some inherent comedy in the spectacle of a blind man changing a light bulb, you needn't worry. Soon-ho, who seems to have a wry, detached perspective on the difficulties of her life with Young-chan, quietly gets the giggles several times. It might sound faintly condescending to say that the whole scene is one of the most inspiring things I've ever seen in a motion picture, as if I were marveling at the fact that people with severe disabilities can cope with everyday chores. Honestly, what I felt was gratitude: to Yi, the filmmaker, for allowing me to share this time with the couple, and to Soon-ho and Young-chan, for the reminder that the really important thing about being alive is how you relate to other people and the world around you, rather than how many tasks you complete or how quickly.

When it comes to accomplishments, however, there's no need to make special allowances for these people. During the course of "Planet of Snail," we see Young-chan take (and pass) a university exam in Hebrew (!), create whimsical and fluid little clay figurines, write essays and poetry, and produce a play that seems to combine a meditation on disability with Christian parable. Soon-ho seems content to serve, quite literally, as Young-chan's eyes and ears, producing and directing his play, transcribing his written work and doing real-time translation as needed. Is there a hint of subterranean tension in their marriage, as in the scene in a park when Young-chan embraces a tree with his hands and face, asking Soon-ho to leave them alone? Well, all marriages have their secrets, so maybe. But these two people are deeply familiar with loneliness in a way most of us will never know, and may also appreciate the joys of togetherness at a different level. Any married couple would be lucky to find the persistent delight in each other's company that these two have, honestly.

There's not much narrative to "Planet of Snail," and it's not a dissertation about disability in Korean society or any such thing. One of Soon-ho's major concerns, which the couple discusses matter-of-factly, is the possibility that she may die before Young-chan does, and the fact that it's critical for him to master some basic life skills on his own. (It may frustrate some viewers that we never learn the couple's ages, although they appear to be around 40, nor any specifics of their medical conditions beyond the obvious facts. You just have to accept that those questions are not the point.) In that light, here's another thing to be grateful for: the fact that throughout the industrialized world, ideas about disability have shifted to the point that people like Young-chan and Soon-ho can write plays and go to college and lead largely independent lives, rather than being locked away or hopelessly infantilized.

This is a love story of uncommon loveliness and simplicity, and one that made me feel at least a smidgen of renewed faith in human nature, after a very dark week on the movie beat. But it's really not a sentimental tale about romantic love with a capital R. It's a story about technology and community and society, from the computer gizmo that translates written text into Braille that Young-chan can read to the shuttle van that takes him to a community center where he can socialize with other deaf-blind people and talk to social workers who speak his esoteric sign language. I see this movie, in fact, as a parable about the fact that true individuality depends upon healthy community, and vice versa. It's a lesson Americans have largely forgotten, if we ever knew it in the first place.

"Planet of Snail" is now playing at Film Forum in New York. It opens Aug. 25 at Time & Space Limited in Hudson, N.Y., Sept. 7 at the Varsity Theatre in Seattle, and Nov. 8 at the Southwest Film Center in Albuquerque, N.M., with more cities to be announced and home video release to follow.