A vital new book from the TARP IG, and yesterday's vote on a Fed audit, reveal some disturbing truths 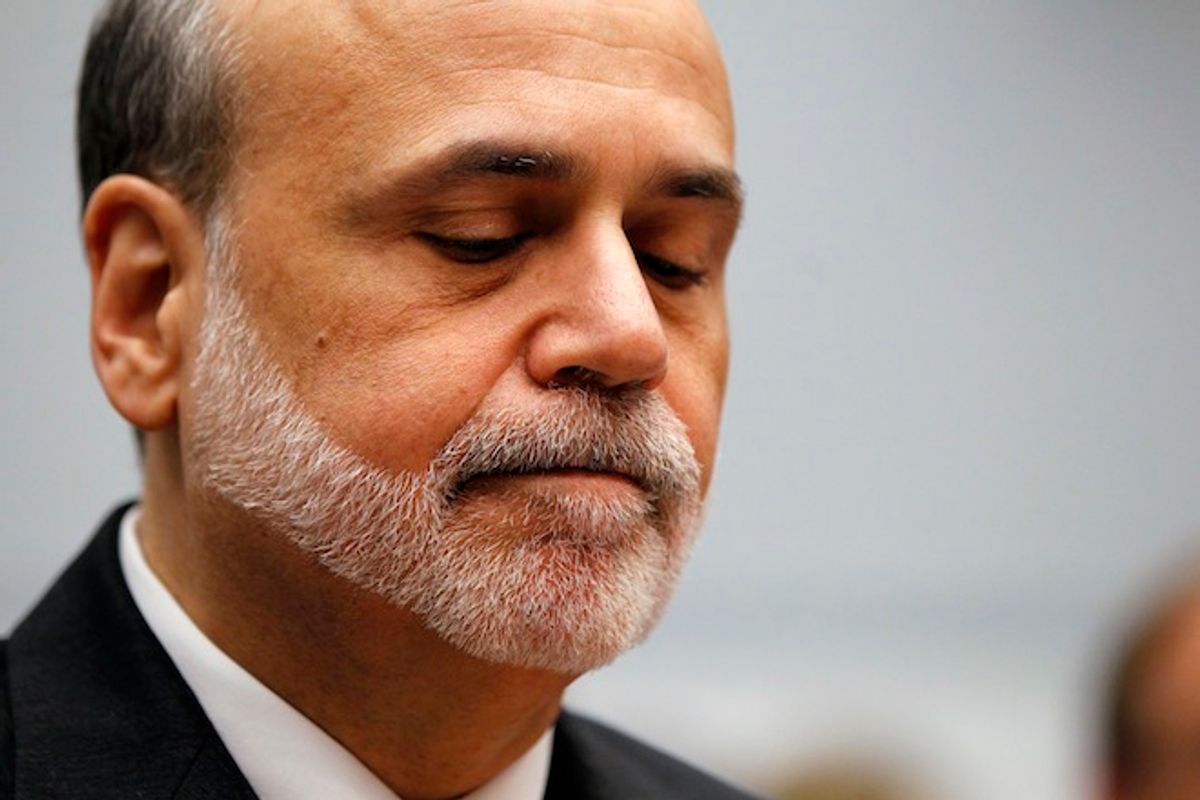 If you believe the Federal Reserve has done a fine job of managing monetary policy and trust it to continue to exert vast power with no accountability or transparency, then you are probably content with the status quo. But yesterday, "a powerful left-right coalition" in the House of Representatives -- defying the Fed as well as a likely White House veto -- voted overwhelmingly to enact Rep. Ron Paul's bill to subject the Fed's monetary policy to audits by the Government Accountability Office, a nonpartisan and independent congressional agency. As Dennis Kucinich, one of 89 Democrats to vote for the bill, put it: "It's time that we stood up to the Federal Reserve that right now acts like some kind of high, exalted priesthood, unaccountable to democracy."

Despite the large bipartisan House majority in favor of the bill, it is almost certain, as Reuters put it, "to die in the Democrat-controlled Senate." That's because "Majority Leader Harry Reid, Nevada Democrat, at one time expressed support for an audit — though he reportedly has changed his mind." Indeed, despite substantial Democratic support for the bill (including some from the progressive wing, such as Kucinich, Jerry Nadler and Raul Grijalva), "every top Democratic leader [in the House] voted against the bill, including Minority Leader Nancy Pelosi of California and Whip Steny H. Hoyer of Maryland." As former Alan Grayson aide Matt Stoller documented yesterday, Democratic leaders did not merely oppose the bill but actively whipped against it, meaning they sought to pressure caucus members to stay in line and oppose it; but as he observes: "The Democratic leaders, despite whipping, barely got a majority of the caucus to vote no. This is a massive failure on their part, and shows how weak they are."

It was this same left-right coalition, led by Paul and joined by liberal Democrats such as Alan Grayson, that succeeded in enacting an Audit the Fed bill back in 2010. Even though that 2010 bill was substantially weakened by the same forces that oppose the bill now -- the Fed, the White House, and party leadership -- that audit, once completed, "revealed 16 trillion dollars in secret bank bailouts and has raised more questions about the quasi-private agency’s opaque operations" and independently showed that the Fed ignored rules to aid the largest banks. Sen. Bernie Sanders, whose watered-down Audit the Fed amendment is what passed in the Senate in 2010, said this about the audit revelations:

The first top-to-bottom audit of the Federal Reserve uncovered eye-popping new details about how the U.S. provided a whopping $16 trillion in secret loans to bail out American and foreign banks and businesses during the worst economic crisis since the Great Depression. . . . "As a result of this audit, we now know that the Federal Reserve provided more than $16 trillion in total financial assistance to some of the largest financial institutions and corporations in the United States and throughout the world," said Sanders. "This is a clear case of socialism for the rich and rugged, you're-on-your-own individualism for everyone else."

The argument has always been that the Fed must be able to act with independence and secrecy and that transparency would undermine its credibility and lead to political interference in monetary policy; especially now, the ostensible concern is that Republicans will impede necessary measures. But as Stoller points out, none of the parade of horribles about which the Fed warned resulted from the 2010 audit, and more to the point, the Fed -- prime enablers of banks, crony capitalism and oligarchy -- has proven that it deserves neither the trust nor the credibility which it had previously commanded. It's remarkable to watch the Democratic Party become its most devoted defenders. As Stoller said about yesterday's vote: "It's so tiresome to see the Democratic leadership take the side of Wall Street, over and over and over."

Along those lines, Neil Barofsky, the Inspector General of the TARP bailout program from 2008 until 2011, has a must-read new book entitled Bailout: An Inside Account of How Washington Abandoned Main Street While Rescuing Wall Street. When he was serving as IG, I praised Barofsky's independence and adversarial watchdog mentality several times when he was warning of the Treasury Department and Tim Geithner's overarching devotion to the interests of Wall Street at the expense of everyone else. But this new book lays out the case as clearly and powerfully as it can be made that the Obama administration and Geithner, as The New York Times' Gretchen Morgenson put it, "eagerly served Wall Street interests at the public’s expense, and regulators were captured by the very industry they were supposed to be regulating." She adds:

"The suspicions that the system is rigged in favor of the largest banks and their elites, so they play by their own set of rules to the disfavor of the taxpayers who funded their bailout, are true," Mr. Barofsky said in an interview last week. “It really happened. These suspicions are valid" . . . .

Mr. Barofsky joins the ranks of those who believe that another crisis is likely because of the failed response to this one. "Incentives are baked into the system to take advantage of it for short-term profit," he said. "The incentives are to cheat, and cheating is profitable because there are no consequences."

As one very good review of the book began: "I sincerely did not think it would be possible at this point to lower my opinion of Tim Geithner. Nor did I think it possible, after the year and a half I just spent there, to make me think less of DC. . . . [F]ormer TARP watchdog Neil Barofsky has accomplished both with his just-published book Bailout." Barofsky has been particularly critical of the Treasury Department's failure to use the billions in funds allocated by Congress to help distressed homeowners as part of the HAMP program, on the ground that bankers -- rather than ordinary Americans -- were their only real concern (MSNBC's Chris Hayes, citing this New York Times article on the administration's HAMP failures, previously said that the "[White House's] foreclosure mitigation failure has been so egregious and cruel, it makes me question their motives on everything").

Predictably, Barofsky, a life-long Democrat and 2008 Obama supporter, has now become a Prime Enemy of Democratic partisans and banker-loyal, establishment-protecting, status-quo-perpetuating apparatchiks (as yesterday's vote demonstrates, there is substantial overlap between those two categories). When Barofsky left his job as IG in 2011, a cowardly Obama official -- naturally allowed by a Washington Post reporter to hide behind a shield of anonymity -- maligned him as being desperate for media attention and "consistently wrong about a lot of big things" (without specifying any of those things). In an interview this week with Charlie Rose, Geithner pronounced himself "deeply offended" at Barofsky's claims (without actually refuting them or claiming they are inaccurate).

Several months ago, Obama economics adviser Austin Goolsbee darkly announced on Twitter: "Seems Barofsky has agenda," and when challenged by Barofsky for specifics, added: "If you consistently try to highlight anything negative that’s an agenda. That feels like what you’ve been doing" (as usual, anyone who criticizes Obama -- even life-long Democrats and those who supported him in 2008 -- must harbor secret, malicious motives). And now, after Morgenson's positive words, The New York Times rushes to side with Geithner and the banks with its formal review today that harshly slams Barofsky's book (both Jason Linkins and Yves Smith extensively document the dishonesty at the heart of that review).

In sum, Barofsky is as well-positioned as it gets to describe the priorities and loyalties of the economic policymakers inside the administration, and is one of the very few Washington officials with the independence and courage to do so. Unsurprisingly, his book presents the definitive case for how the Obama administration devoted itself to the interests of the very plutocrats who precipitated the financial crisis in the first place. Recall how former IMF chief economist Simon Johnson, in his seminal 2009 article in The Atlantic entitled "The Quiet Coup," described how corrupt oligarchies generally respond to a financial crisis:

Squeezing the oligarchs, though, is seldom the strategy of choice among emerging-market governments. Quite the contrary: at the outset of the crisis, the oligarchs are usually among the first to get extra help from the government, such as preferential access to foreign currency, or maybe a nice tax break, or—here’s a classic Kremlin bailout technique—the assumption of private debt obligations by the government. Under duress, generosity toward old friends takes many innovative forms. Meanwhile, needing to squeeze someone, most emerging-market governments look first to ordinary working folk—at least until the riots grow too large.

Last night, Barofsky was on The Rachel Maddow Show, talking to guest host Ezra Klein, and he described many of the ways that the Obama administration sought to protect banks and Wall Street at the expense of ordinary citizens, and also addressed what, on Twitter this morning, he called the "silly meme that because Wall Street supports Romney, it means the Obama Administration was tough on Too Big To Fail" [edited to fix Twitter abbreviations]. Needless to say, Mitt Romney is a fully faithful and devoted servant of the Wall Street industry that made him so rich, but as Barofsky details -- using his first-hand, insider knowledge -- those same interests are bountifully served by the current administration as well:

In this month's issue of The New Inquiry, Charles Davis has a very worthwhile (satirical) article vigorously defending President Obama from left-wing criticisms of his foreign policy and aggression.