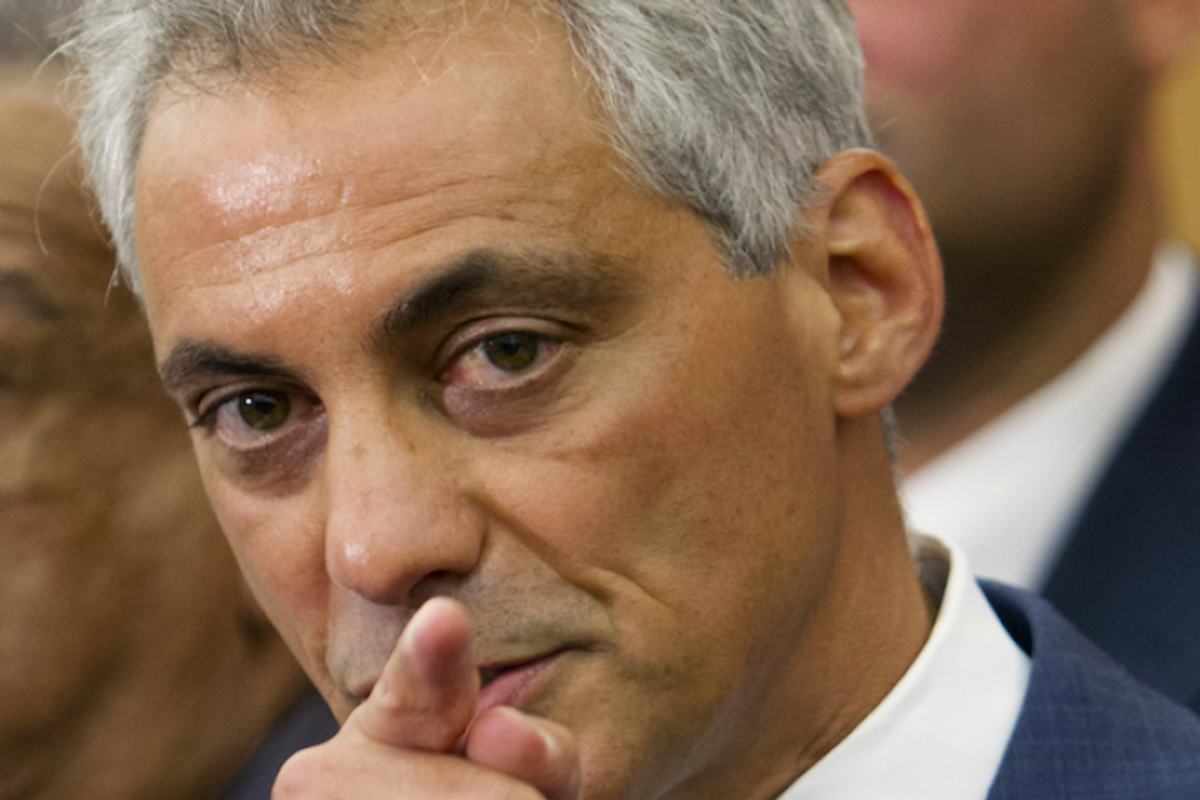 Should government officials be able to block businesses from opening or expanding due to disagreement with the political views of the business' executives? Chicago Mayor Rahm Emanuel evidently believes he should have this power:

The anti-gay views openly espoused by the president of a fast food chain specializing in chicken sandwiches have run afoul of Mayor Rahm Emanuel and a local alderman, who are determined to block Chick-fil-A from expanding in Chicago.

"Chick-fil-A’s values are not Chicago values. They’re not respectful of our residents, our neighbors and our family members. And if you're gonna be part of the Chicago community, you should reflect Chicago values," Emanuel said Wednesday.

"What the CEO has said as it relates to gay marriage and gay couples is not what I believe, but more importantly, it's not what the people of Chicago believe. We just passed legislation as it relates to civil union and my goal and my hope … is that we now move on recognizing gay marriage. I do not believe that the CEO’s comments … reflects who we are as a city."

Obviously, it's perfectly legitimate for private citizens to decide not to patronize a business with executives who have such views (I'd likely refrain from doing so in this case). Beyond that, if a business is engaging in discriminatory hiring or service practices in violation of the law -- refusing to hire gay employees or serve gay patrons in cities which have made sexual orientation discrimination illegal -- then it is perfectly legitimate to take action against them.

But that is not the case here; the actions are purely in retribution against the views of the business' top executive on the desirability of same-sex marriage:

On Wednesday, the tag team of Emanuel and Moreno joined the chorus, citing Cathy’s anti-gay views.

As my Salon colleague Mary Elizabeth Williams noted when writing about the controversy in Boston: "Aside from the fact that Chick-fil-A is always closed on Sunday, there’s no evidence those beliefs have been institutionalized in any way. There’s no record of refusing service to gay patrons, or unfair hiring practices, or a hostile work environment." Indeed, Joe Moreno, the Chicago alderman who represents a "hipster ward" and who initially blocked the business' expansion, made clear that he was motivated not by any alleged discriminatory business practices but solely by "bigoted, homophobic comments": namely, the Chick-fil-A President's view that the Bible mandates marriages be between men and women only. And as Williams noted, the company oversees a "foundation that’s contributed financially to" numerous right-wing groups: Eagle Forum, Focus on the Family and the Family Research Council, among others.

It's always easy to get people to condemn threats to free speech when the speech being threatened is speech that they like. It's much more difficult to induce support for free speech rights when the speech being punished is speech they find repellent. But having Mayors and other officials punish businesses for the political and social views of their executives -- regardless of what those views are -- is as pure a violation of the First Amendment's guarantee of free speech as it gets, and beyond that, is genuinely dangerous.

If you support what Emanuel is doing here, then you should be equally supportive of a Mayor in Texas or a Governor in Idaho who blocks businesses from opening if they are run by those who support same-sex marriage -- or who oppose American wars, or who support reproductive rights, or who favor single-payer health care, or which donates to LGBT groups and Planned Parenthood, on the ground that such views are offensive to Christian or conservative residents. You can't cheer when political officials punish the expression of views you dislike and then expect to be taken seriously when you wrap yourself in the banner of free speech in order to protest state punishment of views you like and share. Free speech rights means that government officials are barred from creating lists of approved and disapproved political ideas and then using the power of the state to enforce those preferences.

As always, the solution to noxious ideas like the ones from this chicken CEO are to rebut them, not use state power to suppress them. The virtue of gay equality has become increasingly recognized in the U.S. because people have been persuaded of its merits, not because state officials, acting like Inquisitors, forced people to accept it by punishing them for their refusal. Perhaps Rahm Emanuel is motivated by beneficent ends, or maybe he's motivated by political considerations and a love of his own power, but either way, abusing his power to punish views he dislikes is at least as offensive as -- and definitely more dangerous than -- the targeted views themselves.

UPDATE: Regarding Emanuel's view that anybody who opposes same-sex marriage does not belong in Chicago -- on the ground that "if you're gonna be part of the Chicago community, you should reflect Chicago values" -- Michael Dougherty asks:

UPDATE II: The liberal Boston Globe Editorial Page denounced the same conduct by Boston Mayor Thomas Menino and wrote: "which part of the First Amendment does Menino not understand? A business owner’s political or religious beliefs should not be a test for the worthiness of his or her application for a business license. . . . History will render judgment on the views of Chick-fil-A executives. City Hall doesn’t have to."

That's so basic that it's just astounding that anyone, let alone Mayors of big cities, need to be told this. Then again, the reason the prohibition was put in the First Amendment -- and the reason it's so often violated -- is precisely because every petty tyrant, by definition, has the temptation to abuse his power to punish those with views he dislikes.

UPDATE III: Some people -- in comments, on Twitter and elsewhere -- are defending what Emanuel and Menino are doing on the ground that the Chick-fil-A is not being punished for the views of its CEO, but because it donates money to Bad Groups (i.e., conservative groups), and since money is not speech, there is nothing wrong with this. Aside from the fact that the city officials do not even claim this to be the case (they're open about the fact that they're acting to punish the company for the political views of the CEO), suppose a town in Alabama or Montana or Central California were to enact this ordinance:

Any resident found to have donated money to a group advocating same-sex marriage or abortion rights -- including, without limitation, Human Rights Campaign or Planned Parenthood -- shall be barred from opening or operating a business in this city.

For those offering the defense I just referenced, what possible grounds would you have for objecting to such an ordinance (other than to say that it's OK when the state punishes views that you dislike, not ones you like)?

UPDATE IV: For those claiming that the cities are not taking action against Chick-fil-A, but are merely expressing disapproval of the views of the CEO: you're 100% wrong. The very first paragraph of the very first article I cited above -- from The Chicago Sun-Times -- reports: "The anti-gay views openly espoused by the president of a fast food chain specializing in chicken sandwiches have run afoul of Mayor Rahm Emanuel and a local alderman, who are determined to block Chick-fil-A from expanding in Chicago." It describes the efforts of Alderman Moreno "to block Chick-fil-A from opening its first free-standing restaurant in Chicago’s Logan Square neighborhood." Moreover, both Moreno and Emanuel are urging the full City Council to deny the company the permits they need to open. And in Boston, Mayor Menino threatened that they would have special barriers imposed due to their political views: "If they need licenses in the city, it will be very difficult. . . . "

Nobody contests the right of public officials to express disapproval for anything -- obviously. That's not the issue. As all of these reports demonstrate, this goes far beyond mere expression of disapproval into active denial of licenses due to the government officials' dislike of their political views.

UPDATE V: In 2007, the Pulitzer Prize winning cartoonist, Ann Telnaes, captured perfectly the view that many people actually have as they claim to believe in free speech -- a view I've encountered everywhere I've turned today in response to this column:

(Credit: Telnaes and the Cartoonist Group; re-printed with permission)

By stark contrast, this is what people do who actually believe in free speech rights and the First Amendment.

UPDATE VI: I'm happy to observe that most liberal commentators opining on this topic are condemning Emanuel, and for exactly the right reasons; see, e.g., Kevin Drum, Adam Serwer, Scott Lemieux, Digby, Richard Kim, John Cole, and Atrios. The true test of a belief in free speech is whether you defend that right not when views you like are being punished -- then it's easy to object -- but when views you intensely dislike are being punished.

UPDATE VII: The uproar over all of this today seems to have produced some positive movement. In Boston, Mayor Menino now acknowledges that his planned actions would violate the rights of the restaurant chain, and thus "backed away from a threat to actively block the fast-food chain from setting up shop in the city," saying: "I make mistakes all the time. That's a Menino-ism."

Meanwhile, in Chicago, multiple media sources -- as set forth in Update IV -- had reported that Emanuel supported Alderman Moreno's announcement that the alderman, as the Chicago Tribune put it, "planned to use his aldermanic privilege to block the construction of a second Chick-fil-A in Logan Square because of comments made last week by company President Dan Cathy" (see also The Huffington Post: "A Chicago alderman is taking heat this week after announcing his Mayor Rahm Emanuel-backed plans to block fast-food chain Chick-fil-A's expansion into the Logan Square neighborhood he represents"; The Chicago Tribune yesterday: "An alderman trying to block a Northwest Side Chick-fil-A restaurant because of the company president's opposition to gay marriage found himself under fire Wednesday  . . . . Mayor Rahm Emanuel, long a supporter of gay marriage, remains in Moreno's corner"). Yet today, in the wake of an explosion of controversy over this story -- in which numerous groups including the ACLU accused him of unconstitutional conduct -- Emanuel had his spokesman issue a statement vowing: "If they meet all the usual requirements, then they can open their restaurant, but their values aren't reflective of our city." This is why vocally objecting to such actions is so necessary.