A new book is an incredibly useful primer on our budget crisis, except when it comes to assigning blame for it 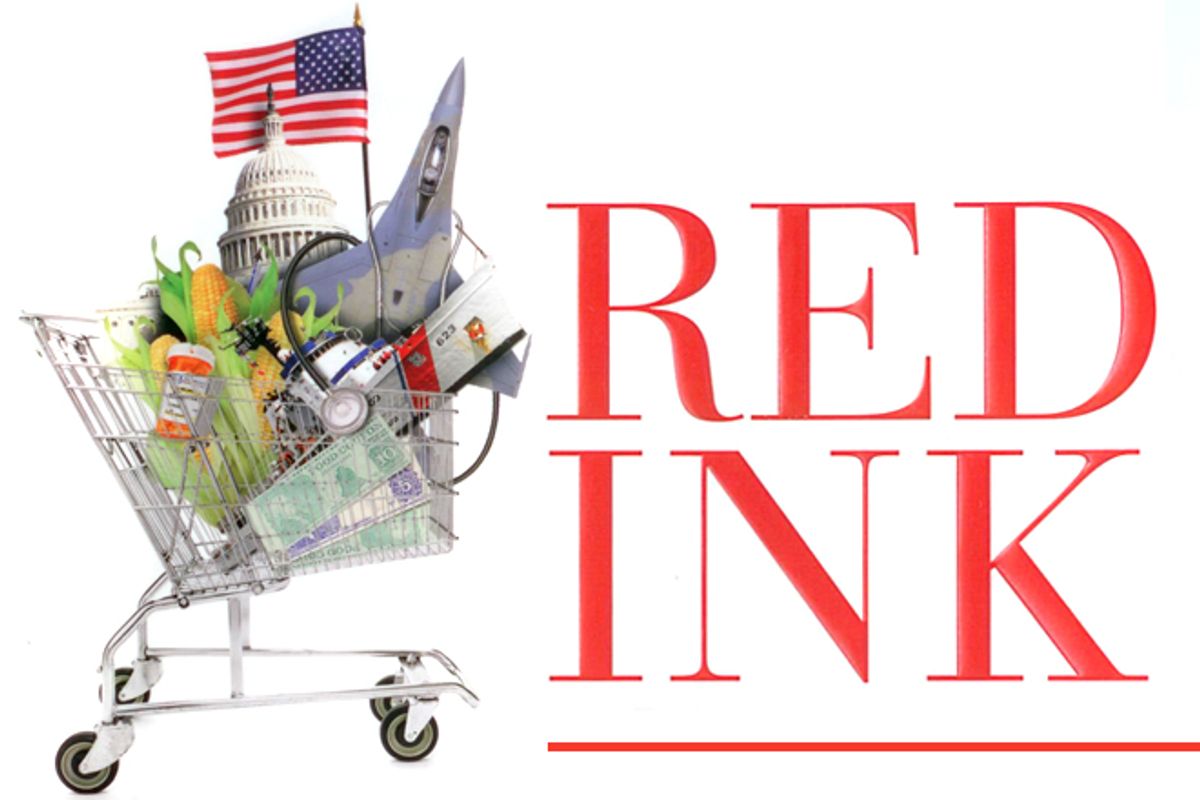 Here are some shocking facts that I learned from "Red Ink: Inside the High-Stakes Politics of the Federal Budget. Where the Trillions Come From, Where They Go, and Why Inaction Imperils Our Future."

"Red Ink" is an extraordinarily useful book. It is exactly what author David Wessel, economics editor for the Wall Street Journal, claims it to be: "a collection of uncomfortable, indisputable facts showing the unsustainable fiscal course the U.S. government is on." It is concise, readable and informative. For people unfamiliar with the ins and outs of the federal budget, it should be required reading. For those who already know their way around government finances, it is still a handy resource, but at the same time deeply depressing. Because "Red Ink" is also an extraordinarily frustrating book. Our dire circumstances are undeniable  -- at some point, we are going to have to pay the piper for living on borrowed money -- but the way out of our predicament is much less clear. And at the end of "Red Ink," one is left wondering: Who is to blame for this mess? Who is stopping us from fixing it?

A disclaimer seems necessary here: My own view, having followed politics closely for my entire adult life, is that Republicans bear more responsibility for our mangled finances than Democrats. And as I started "Red Ink," one of key questions was whether Wessel's reporting would support or reject that thesis. After finishing the book, I am even more certain that our deficit debacle is primarily the GOP's fault (and I'll lay out my case below) -- but my convictions were not influenced by any explicit argument made my Wessel.

Wessel, a member of two Pulitzer-winning teams at the Wall Street Journal, is not very helpful for those seeking to assign primary blame. He performs the remarkable feat of writing about a highly politicized issue without betraying any overt signs of bias. "Red Ink" is a book that treats people like Paul Ryan -- the arch-conservative Wisconsin Republican, and chairman of the House Budget Committee -- and Paul Krugman -- the crusading liberal Nobel-economics-prizewinning New York Times opinion columnist -- with equal respect. I suspect partisans of either stripe will feel that their own hero is given due props, while scoffing at the gentle handing of their enemies. Overall there's a distinct sense of "a pox on both houses" pervading the narrative, and that's probably something most readers will agree with. It took hard work by both political parties to get us where we are today.

But while it is refreshing to see a topic as complicated -- and polarizing -- as the federal budget set forth in such a fair-minded, non-polemical manner, the facts as laid out by Wessel do seem to tell a story in which feckless Republicans play an oversize role. The question is, by never stating that outright, is Wessel being cowardly behind a facade of fairness? This is important, because if one side is more to blame than the other, then the obvious next step is to rally political pressure against that side. The position that everybody's equally to blame becomes a cop-out.

Everyone shares some portion of the blame, that's for sure. Liberals are often predisposed to pin the responsibility for our current disastrous imbalance between revenue and spending on the awesome destruction wrought by George W. Bush on Bill Clinton's budget surplus. And there's plenty of truth to that, of course, all very neatly laid out by Wessel. But our problems go deeper than the hole George W. dug. Even if Bush hadn't gone on a reckless tax-cut-and-spending binge, we'd still be facing the challenge of how to afford our own government in the long run. Even during the balanced budget years of the Clinton administration, anyone looking ahead could see that existing government commitments to provide healthcare through Medicare and Medicaid were going to pose huge budgetary challenges as the baby boomer generation aged.

Both parties have long been complicit in taking us down a decades-long path where taxes have steadily been cut while that looming healthcare bill continued to grow. Bipartisan consensus -- backed up by a voting public that wants its safety net but doesn't want to pay for it -- got us where we are today.

Today, however, as Wessel explains we are witnessing a great ideological clash on how best  to avert the coming catastrophe. Republicans want to vastly pare down our social welfare commitments and rely on a competitive, "free" market in healthcare provision to bring costs down. Democrats want to increase revenues to pay for something closer to universal coverage, while using government negotiating leverage to cut costs.

In a theoretical world we can argue ourselves blue in the face over the merits of these different approaches. We can line up our economists, compare ourselves to what other countries are doing, point out how markets tend to fail and governments tend to provide bad incentives. The parties then make their case to the voters, and the people decide which way the country should go. In this theoretical universe, it would be a helpful thing if every voter read "Red Ink" before filling out his or her ballot. It's great to have a solid grounding in the facts.

But it's also helpful to review reality, by which I mean the actual record of what the two parties have done while in power to tackle the looming crisis.

Obama passed a healthcare law that, according to the Congressional Budget Office, reduces the deficit. It also includes a passel of measures testing out various cost containment strategies. Liberals hate it for not going far enough, conservatives despise it as socialism, and there's no guarantee that it will work. But it's there -- a stab at the problem.

In contrast, the last time the Republicans had control of the White House and Congress, their major contribution to our nation's healthcare policy was to pass a huge expansion to Medicare that included no funding mechanism whatsoever. The Medicare drug prescription benefit is an open-ended commitment that in the long run will cost more than both the Iraq and Afghanistan wars. And Paul Ryan voted for it.

You really can't have an argument about healthcare and the budget without confronting this basic truth. Republicans acted utterly irresponsibly when they held power. They expanded the social welfare commitments of the U.S. but provided no funding to pay for them. And there's absolutely no guarantee that they won't do so again if they regain power, because their anti-tax ideology allows for no wiggle room when facing the fundamental political fact: Americans like Medicare. They like Social Security. They like unemployment benefits. They will not reelect politicians who screw with those programs.

Let's go a little further into the mire. Wessel lavishes a lot of praise on the Congressional Budget Office, calling it an institution that, by and large, has remained free from the partisan ideological morass. But he doesn't acknowledge that during the Obama administration, congressional Republicans have routinely dismissed any CBO analysis that comes to a conclusion they don't agree with.

It's very difficult to dwell on this without going apoplectic. Again: Republicans passed an expansion of healthcare without any mechanism to pay for it. That's pretty bad, from a boosting-the-deficit standpoint. But when Democrats passed their own expansion, funded by a mix of spending cuts and tax hikes that, together, lower the deficit, Republicans just dismissed the numbers as fake.

There's a reason why we can't seem to make any progress on our fiscal mess: One of our two political parties has gone nuts.

Wessel explicitly chooses not to make this clear in his treatment of our national budget debacle. It's easy to understand why: As soon as you position yourself on one side of the political spectrum, you completely lose the attention of everybody who is aligned on the other. Your numbers get dismissed as partisan. This review of "Red Ink" will certainly suffer that fate. And that's a shame. But it's not enough to merely explain why "inaction imperils our future." You also need to explain why there's inaction in the first place. And that requires taking sides.