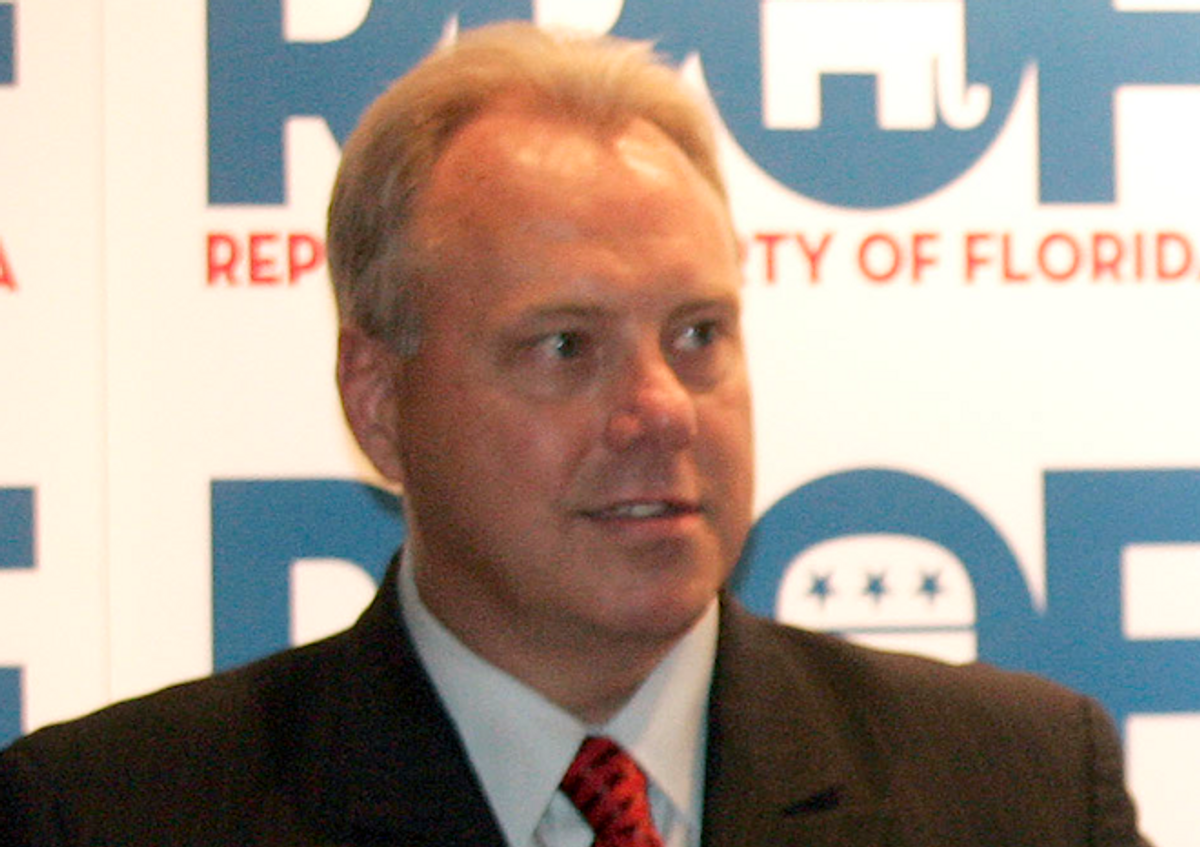 In the debate over new laws meant to curb voter fraud in places like Florida, Democrats always charge that Republicans are trying to suppress the vote of liberal voting blocs like blacks and young people, while Republicans just laugh at such ludicrous and offensive accusations. That is, every Republican except for Florida’s former Republican Party chairman Jim Greer, who, scorned by his party and in deep legal trouble, blew the lid off what he claims was a systemic effort to suppress the black vote. In a 630-page deposition recorded over two days in late May, Greer, who is on trial for corruption charges, unloaded a litany of charges against the "whack-a-do, right-wing crazies'' in his party, including the effort to suppress the black vote.

In the deposition, released to the press yesterday, Greer mentioned a December 2009 meeting with party officials. "I was upset because the political consultants and staff were talking about voter suppression and keeping blacks from voting,'' he said, according to the Tampa Bay Times. He also said party officials discussed how “minority outreach programs were not fit for the Republican Party," according to the AP.

The comments, if true (he is facing felony corruption charges and has an interest in scorning his party), would confirm what critics have long suspected. Florida Gov. Rick Scott is currently facing inquiries from the Justice Department and pressure from civil rights groups over his purging of voter rolls in the state, an effort that critics say has disproportionately targeted minorities and other Democratic voters. One group suing the state claims up to 87 percent of the voters purged from the rolls so far have been people of color, though other estimates place that number far lower. Scott has defended the purge, even though he was erroneously listed as dead himself on the rolls in 2006.

As Vanity Fair noted in a big 2004 story on the Sunshine State’s voting problems, “Florida is a state with a history of disenfranchising blacks.” In the state’s notoriously botched 2000 election, the state sent a list of 50,000 alleged ex-felons to the counties, instructing them to purge those names from their rolls. But it turned out that list included 20,000 innocent people, 54 percent of whom were black, the magazine reported. Just 15 percent of the state’s population is black. There were also reports that polling stations in black neighborhoods were understaffed, leading to long lines that kept some people from voting that year. The NAACP and ACLU sued the state over that purge. A Gallup poll in December of 2000 found that 68 percent of African-Americans nationally felt black voters were less likely to have their votes counted fairly in Florida.

Former Republican Gov. Charlie Crist, who has since become an independent and is rumored to be considering his next run as a Democrat, wrote an Op-Ed in the Washington Post recently slamming Scott's current purge. “Including as many Americans as possible in our electoral process is the spirit of our country. It is why we have expanded rights to women and minorities but never legislated them away, and why we have lowered the voting age but never raised it. Cynical efforts at voter suppression are driven by an un-American desire to exclude as many people and silence as many voices as possible,” he wrote. A recent study from the Brennan Center for Justice at NYU Law School found that voter ID laws disproportionately affect poor, minority and elderly voters.