Rep. John Conyers is the House's second-longest-serving member, but he may be ousted in a primary next month 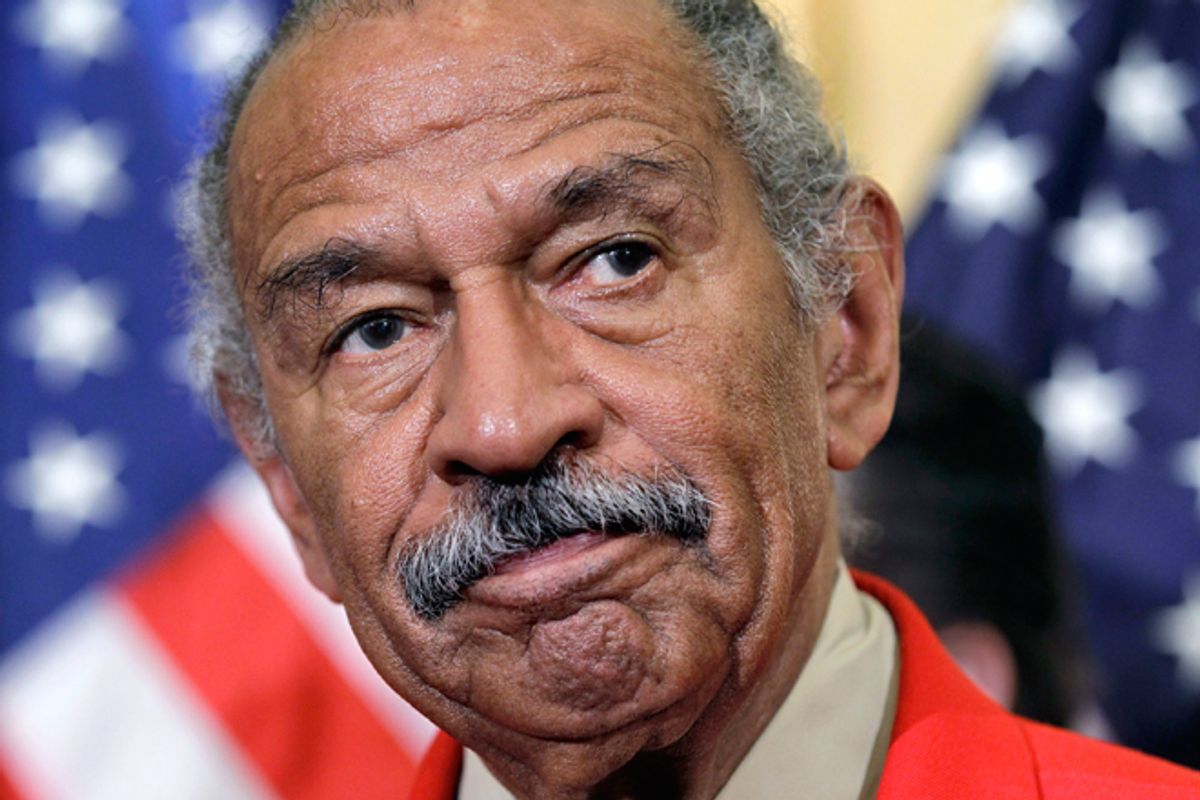 John Conyers is a relic. The congressman, first elected to Washington during the Lyndon Johnson landslide of 1964, is 83 years old, and has been beset, in recent terms, by ethics controversies (including his wife currently serving up to 37 months in federal prison for taking bribes while on the Detroit City Council). Conyers should be vulnerable this year. Or at least as vulnerable as a 24-term incumbent who has always received at least 75 percent in a general election can be. However, Conyers isn’t facing a general election on Aug. 7; he’s running in a racially polarized Democratic primary.

Conyers is facing a crowded field in his new district, the product of a Republican gerrymander that now includes blue-collar, heavily white Detroit suburbs. The result is an electorate that, unlike the disproportionately minority district that Conyers currently represents, will be about 40 percent white, according to Ed Sarpolus, Conyers’ campaign manager.

Although Conyers faces two African-American opponents, state Sen. Bert Johnson and state Rep. Shanelle Jackson, neither has caught fire. Instead, Conyers’ main competitor has become state Sen. Glenn Anderson, a white suburban candidate. As of the most recent FEC deadline, Anderson had almost as much money available as Conyers for the last few weeks of the election and gained a number of endorsements in suburban parts of the district.

The focus of Anderson’s campaign hasn’t been issues. This isn’t to say that Anderson has absolutely no ideological agenda: He touts the fact that he “absolutely support[s] the President’s agenda ... [including] the Affordable Care Act” and, in the wake of the tragic shootings in Aurora, Colo., Anderson also stated his support for “reinstating the assault weapons ban.” But these are merely secondary to his real concern: Conyers’ weakness providing constituent services.

While Anderson had to be prodded to talk about issues with Salon, he railed against a congressman who he believes “has minimized his effectiveness and really isolated himself” over the past 10 years. To Anderson, the key difference between him and the incumbent is his “willingness to meet with people who want to bring jobs and investment" to Detroit and southeast Michigan. Anderson even claimed that Quicken Loans, a major employer in the area, doesn’t even waste its time trying to contact Conyers’ office anymore.

The one issue that Anderson’s campaign doesn’t deal with is the corruption scandal surrounding Conyers’ wife. As a member of the Detroit City Council, she pleaded guilty in 2010 to taking $60,000 in bribes in 2007 (when her husband was the chairman of the House Judiciary Committee) to approve a city contract with a wastewater treatment company called Syangro Technologies. Anderson simply said, “[I’m] not running against his wife but running against John Conyers.”

Conyers’ campaign touts his efforts reaching out to constituents. According to Sarpolus, the congressman has traveled the new parts of his district and has “already been meeting with mayors, council people, face to face, not just by phone, getting ahold of their needs, letting them know what he’s done for other communities he has serviced.” In fact, Sarpolus went so far as to describe Conyers as a veritable Energizer Bunny of campaigning, stating that he “talked to 200 to 300 people a day on the phone” and was “very busy 24/7.” Efforts by Salon to interview Conyers were unsuccessful.

Sarpolus’ statements stand in stark contrast not just to Anderson’s description of Conyers but also to that given by the Detroit Free Press when it gave Conyers a very grudging endorsement on July 15. The Free Press noted that Conyers’ “energy has slowed and he is not delivering for his district the way he used to, or the way he should be.” However, the paper still endorsed Conyers “mostly with the hope that he will soon retire from Congress and the district will produce a more viable alternative.”

Joe DiSano, a Democratic political consultant in Michigan (who has done some work for the AFL-CIO on an independent expenditure campaign on Conyers’ behalf), thinks the 24-term incumbent will ultimately prevail despite his flawed constituent services. “When you’re dealing with an African-American audience,” DiSano said, “that kind of an attack is undercut by their pride in John Conyers’ service over time. I think if this were a completely Caucasian district, that’s a devastating charge.” In DiSano’s mind, “people are underestimating the respect that folks have” for Conyers and that will make the difference on Election Day. After all, what’s the point of being a relic if you can’t be the object of veneration?