Nazis, breasts and guns: Has Madonna lost it?

Madonna's European shows have included swastikas, sex and violence. Is it more than the usual button-pushing? 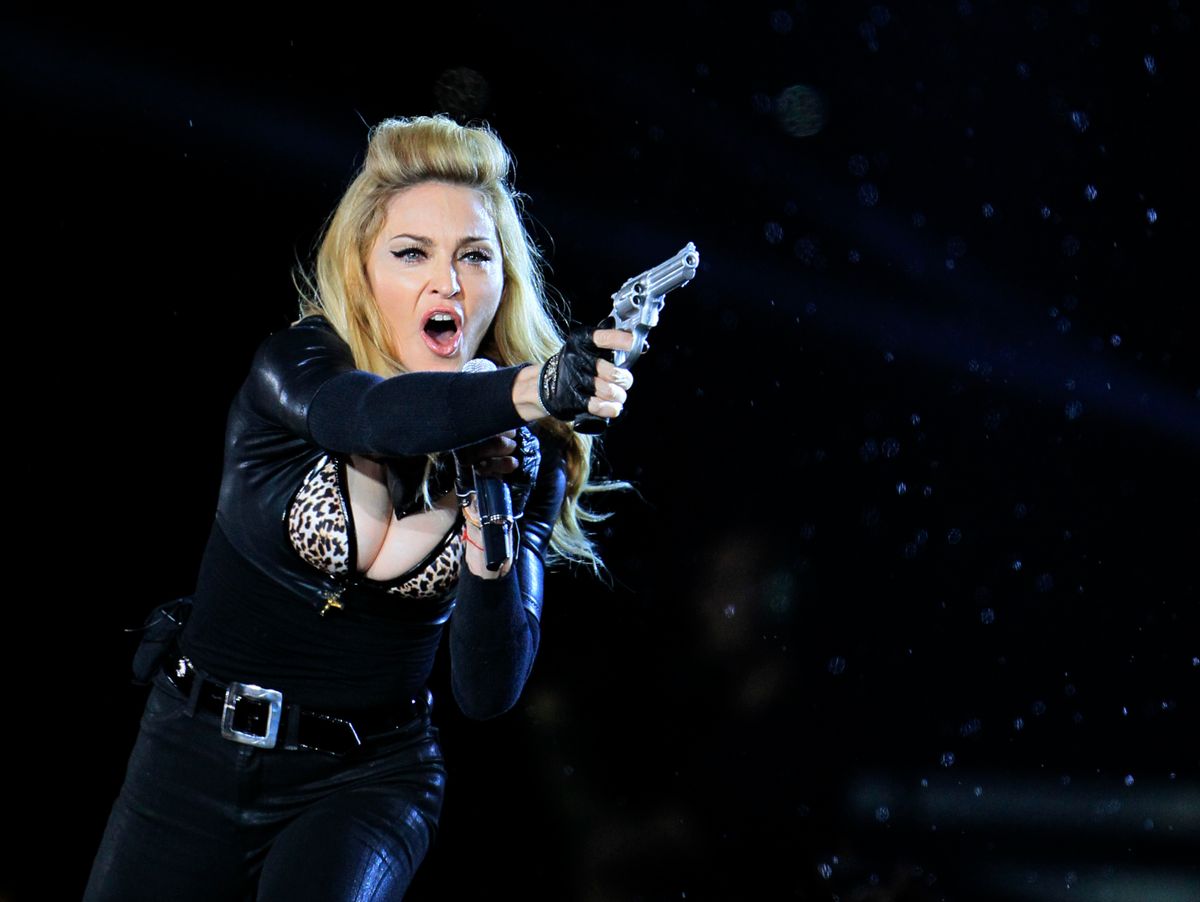 “What’s up with Madonna lately?” a friend asked recently as we were attempting to evade the oppressive July heat in a Manhattan bookstore. She was referring, of course, to Madonna’s super-controversial summer. And she’s not the only one wondering.

Currently on a world tour to promote her latest album, “MDNA,” Madonna’s recent antics have been a bit dramatic, even for her. Let us count the bizarre shenanigans from the beginning. Since June, she’s flashed a nipple during a Turkey live show, flashed her butt a few days later in Italy, shown a video with swastikas superimposed over right-wing leaders’ faces, and continued to use authentic-looking fake guns as part of her choreography even after being asked to cut them from the show following July 20’s movie-theater massacre in Aurora, Colo.

Madonna’s most shocking antic of all, though, was more personal and less widely reported: In early July she visibly fought back tears while performing a stripped-down (and some might say bad) version of her 1984 hit “Like a Virgin” in Berlin. We’ll get to that shortly.

None of Madonna’s aforementioned, purportedly provocative antics are especially surprising, given her track record. With more than 300 million records sold worldwide, she is the highest-selling female recording artist of all time. And, as we all know, she didn’t get there entirely based on the strength of her singing and dancing. She’s absolutely aced the art of controversy; it’s been her lifeblood and her life’s work since she first flounced onto the music scene in 1983. Despite claiming at a short (and disastrous) Paris concert on Thursday night that “it’s not [her] intention to make enemies,” she knows exactly how to stir the proverbial pot, and she just might do it better than anything else she does. She is self-aware enough to admit this; she once said, “I know I'm not the greatest singer or dancer, but that doesn't interest me. I'm interested in being provocative and pushing people's buttons.”

It’s because of that long-standing shock-me game that Madonna herself cops to playing that some Madonna-watchers – myself included – weren’t particularly fazed by this latest wave of headlines. Especially the nipple-reveal; it’s Madonna we’re talking about here, a longtime “is-she-or-isn’t-she” feminist lightning rod who is not known for her subservience, modesty or shyness. She’s been naked or nearly naked before thousands of people thousands of times – it’s part of her oeuvre, and it’s just not a big deal anymore, to her or to us. Sure, the media took the bait and went crazy as usual, but as actress Christina Applegate tweeted after the incident, “and we are shocked because…? It’s not like Sarah Palin had a nip slip, it’s Madonna.”

The French swastika situation was a bit different, of course, in that Madonna was making an overt political statement, which she’s been wont to do from time to time (though not as often as the sexy stuff). France’s right-wing National Front party leader Marine Le Pen is threatening to sue Madge for the image of Le Pen that was projected on-screen as part of a rotating video montage of world leaders during Madonna’s song "Nobody Knows Me.” After said offending image of Le Pen appeared -- with a swastika on her forehead -- it faded into one of Adolf Hitler. Yikes.

But, as mentioned earlier, there is only one recent Madonna moment that did manage to genuinely shock me -- and, as a Madonna-phile since the wee age of 6, that’s not easy to do. What happened, exactly? Two words: Madonna. Cried. (Well, she sort-of cried; judge for yourself here). And she didn’t just cry, she did it in public, onstage in Berlin, while performing one of her earliest, biggest hits: “Like a Virgin.”

Of course, there have been rumors of her crying, here or there, over the years. Back in January, she reportedly became emotional while talking about her mom’s death from breast cancer. And I once read that she fled the stage sobbing after a painful Oprah interview about adopting her Malawi-born son, David.

But Madonna, the ultimate ice queen, crying live in front of masses of rabid fans? That’s a huge deal, not only for its rarity but for what it conclusively reveals about Her Madgesty – something she’s fought to hide since she first started out as that cute ragamuffin up-and-comer at Danceteria in the ‘80s -- she is human. She doesn’t just have a supernaturally taut near-54-year-old body; she doesn’t just have a notoriously smart and calculating mind. There’s more to her than that, and there always has been -- she lives, she breathes, she cares, she cries.

It’s humorous but, again, unsurprising that finding video footage of Madonna’s Berlin breakdown was difficult -- most of the YouTube videos that claimed to capture it were subsequently made “private.” We won’t even bother to wonder why, or wonder who made them that way. Madonna may still try to confuse us, to shock us, to claim -- repeatedly and sometimes desperately -- that “nobody knows me,” but it’s … well, it’s just not true. And though none of us can really claim to know exactly what’s “up with Madonna” this controversial summer, we still know you, Madonna. We always have.