Pick of the week: Ai Weiwei gives us the finger

Pick of the week: A must-see documentary explores the life of China's -- and the world's -- leading artistic rebel 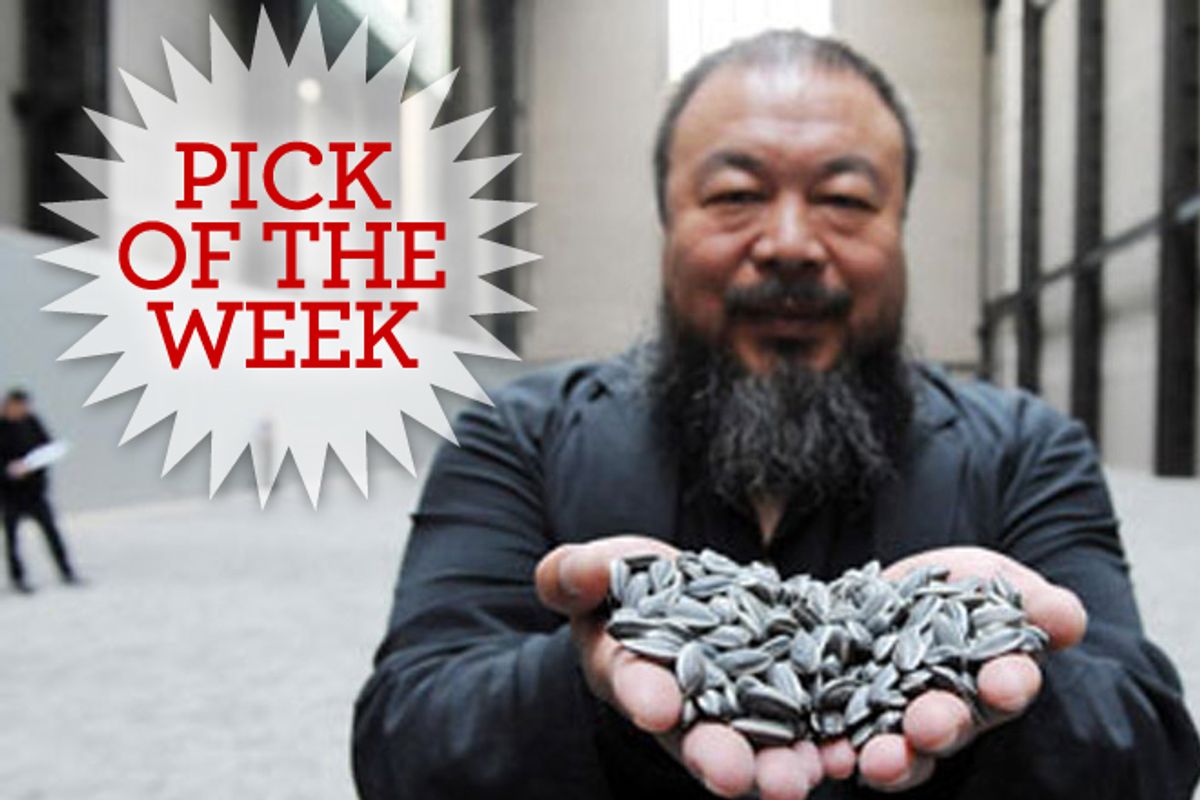 There are any number of things to say about "Ai Weiwei: Never Sorry," Alison Klayman's must-see documentary about the dissident Chinese artist who is probably the most important cultural resistance figure in that burgeoning superpower and therefore in the world. But here's one of the biggest: This is not an opportunity for Americans to preen and congratulate ourselves. Yes, we still live in a country where artistic expression is largely untrammeled and we can generally write or say what we like about the government. (Which is a good thing, since our government is a dysfunctional joke.)

Those are among the freedoms that Ai and millions of other Chinese activists would love to have in their own country, of course, but let's not kid ourselves. At this point those remnant liberties are a charming historical accident. The general trend in American life is moving toward a Chinese-style capitalist autocracy in which corporations are the most important citizens, the political parties represent dueling factions within the ruling elite and constitutional rights exist only on paper, to be revoked by the government at will. I'm sorry, but while we listen to Romney and Obama blather on about the greatness of America and make unfulfillable campaign promises, I have this to say: Any country that has decided that its own citizens are subject to summary execution or imprisonment, without trial and on secret evidence, has abandoned all moral authority when it comes to human rights.

Furthermore, if we set aside the gaseous rhetoric of American exceptionalism -- which both presidential candidates are too well educated to actually believe in -- we're left with the evident fact that China is already the world's manufacturing center and will certainly be the dominant economic power of this century. So the quest to build a functioning civil society in the world's most populous nation, based on some shared conception of human dignity and human freedom, could scarcely have higher stakes. This goes far beyond politics, or questions of artistic expression. We face a period of history when the viability of life on our planet hangs in the balance, and the future direction of Chinese society is likely to affect the lives of everyone and everything on Earth.

So that's the context in which Ai Weiwei sends worldwide tweets of himself extending a middle finger to Tiananmen Square (or the Eiffel Tower, or the White House), or records a profane Internet video to celebrate the People's Republic of China's 60th birthday. (Twitter has become a valuable political tool in many contexts, but Ai has seized upon it as a puckish, provocative political art form like nobody else. You can follow him here if you read Mandarin, and a community-sourced English version is here.) Let's declare an exemption from the family-friendly language of mainstream journalism and get specific: It featured many different people saying "Fuck you, motherland," in various Chinese dialects and several other languages. Whatever about the First Amendment -- if some major American artist did something similar, think how much fun Fox News and the New York Post would have! (And precious few defenders of such a thing would be found on the left.)

Klayman's riveting, vérité-style film captures this burly, bigger-than-life figure over the past three years, as his activism has heightened, his art has grown increasingly confrontational and he has deliberately blurred the distinction between aesthetics and politics. One Chinese colleague, a performance artist who has known Ai for many years, says that he views Ai's entire career and all his actions as works of art, informed by the conceptual revolution of Marcel Duchamp, Joseph Beuys and Andy Warhol. I suspect that's true but not entirely adequate, since there is clearly a moral imperative behind Ai's work that is largely hidden or absent in those Euro-American pioneers. Attempting to sue the local police in the city of Chengdu for beating him up is indeed almost a work of conceptual art on Ai's part, since everyone knows the authorities won't take it seriously. But the gesture is important, he explains: To behave as if the purported rights of Chinese citizens were real rights calls the entire system into question.

Some of Ai's recent work is deliberately shocking, like the middle-finger tweets or the video of himself smashing a genuine Han Dynasty vase. (He has purchased other vases from that much-venerated period, 1,800 to 2,200 years ago, and painted them over with neon colors or Coca-Cola logos.) He has posed direct challenges to the Communist Party's official secrecy, as with his crowd-sourced campaign to collect the names of more than 5,200 children killed in the 2008 Sichuan earthquake, a devastating natural disaster whose effects were magnified by shoddy "tofu construction." But Chinese official critics who impugn Ai as a Western-educated artist with a Westerner's sense of grandiosity have a point, or maybe half a point. He turned the Sichuan earthquake into the impetus for a somewhat abstract outdoor work on the wall of Munich's Haus der Kunst, using thousands of children's backpacks to spell out the Chinese phrase "She lived happily for seven years in this world," taken from a letter written by one victim's mother.

Klayman's movie doesn't make as much of Ai's personal history as it might, but his early life was an extraordinary odyssey through the late 20th century. He was born in 1957, when his father, the poet Ai Qing, was viewed as a loyal Communist and revered revolutionary leader. But after 1966, with the outbreak of Chairman Mao's Cultural Revolution, the young Ai saw his father publicly humiliated and vilified along with many other Chinese intellectuals. (Weiwei's brother says he remembers their father having his face painted with calligraphy ink and being beaten with gun butts before an abusive mob.) As a young man, following China's opening to the West and Mao's death, Ai Weiwei moved to New York, living there from 1981 to 1993. Those were years of remarkable chaos and ferment in Manhattan, and Ai soaked it up, attending punk shows at CBGB, making videos of street protests, organizing avant-garde art shows and acting as godfather to a brand-new Chinese expat community.

From the "big-character posters" and vicious groupthink of the Cultural Revolution to the New York underground art scene of the Reagan and Bush I years -- that's an education in the cost and meaning of nonconformity unlike any other. Four years after the crushing of the Tiananmen Square uprising (which Ai had watched on TV), he and several other Chinese artists returned home, sensing correctly that an unofficial artistic resistance was now possible in Beijing and Shanghai, somewhat like the one they had observed in the West. The resulting creative explosion in China has dramatically reoriented the art world to the east. When Chinese critics (or some Realpolitik-oriented Westerners) argue that Ai is imposing a Westernized worldview on a Chinese context, they're both right and wrong. Ai sees himself as a Chinese patriotic resister first and foremost, and "Western values," insofar as he possesses them, don't come from John F. Kennedy or suburban supermarkets; they come from Lydia Lunch and Jeff Koons and ACT UP.

It's no doubt correct that Ai pushed the Chinese authorities too far and too fast, putting his own family at risk and leading the government to demolish his Shanghai studio -- a studio originally commissioned by the government, when he was in its good graces -- and imprison him for 81 days last year. Of course he did that: He's a rebel by temperament and by training, who decided to take those risks on behalf of millions of other Chinese who can't or won't speak out. Whatever his flaws and foibles as a man and artist may be (and you'll see some of those in Klayman's film), Ai Weiwei is a crucial figure of East-West cultural communication and contemporary history, whose middle finger extended at the centers of power stands for a rising tide of global discontent.