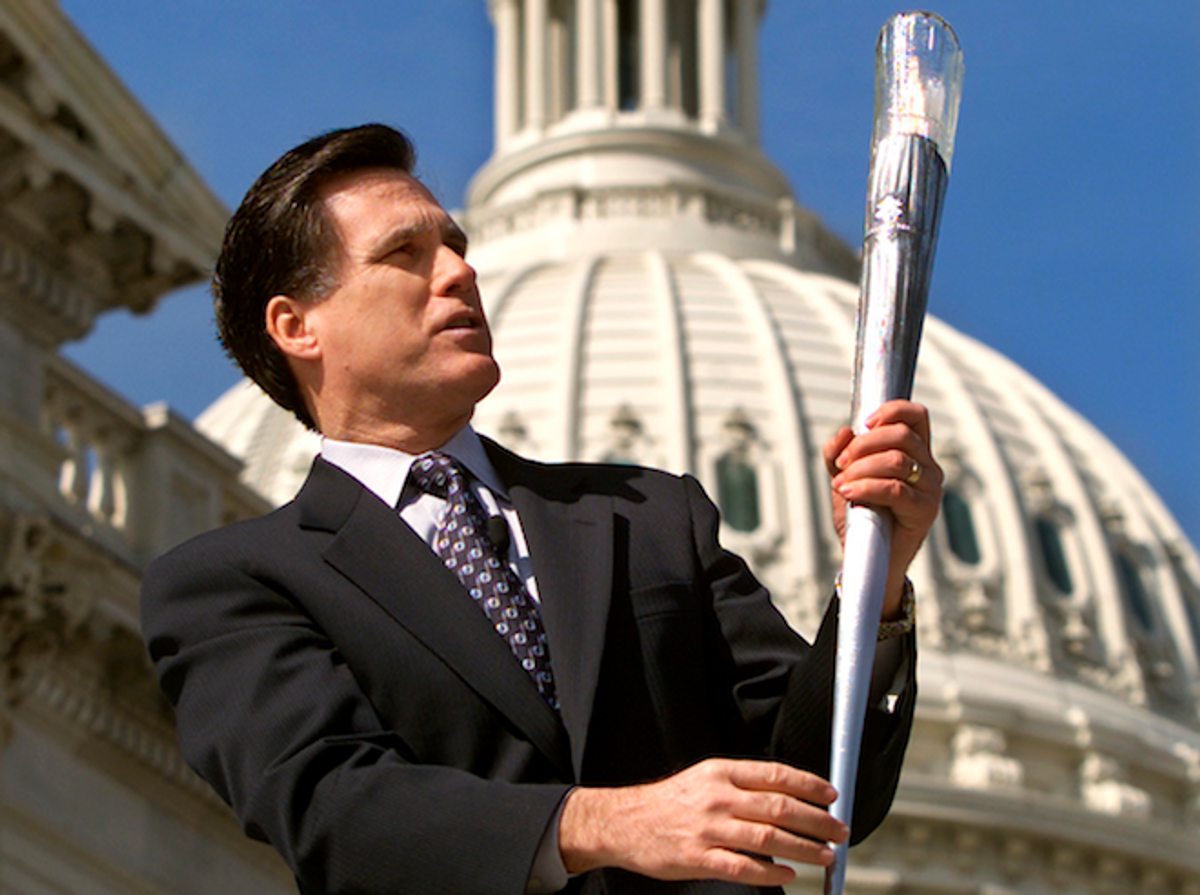 Romney may be backtracking on his initial concerns about London’s preparations ahead of the Olympic games at a race walker's pace, but perhaps he found the city's security situation “disconcerting,” as he told NBC’s Brian Williams, because he feared the Brits were ignoring the threat of animal rights terrorists.

When Romney ran the Winter Olympics in Salt Lake City in 2002, it was just months after the terror attacks on Sept. 11 and security was on everyone’s mind. But Romney wasn’t too worried about Osama bin Laden or al-Qaida, he told the Deseret News. No, the threat Romney feared most was from leftist-animal lovers, as the paper reported in November of 2001:

After hijacked jetliners smashed into the World Trade Center towers and the Pentagon on Sept. 11, Utahns began openly wondering if the 2002 Winter Games might become a target of Islamic terrorists.

But Salt Lake Organizing Committee President Mitt Romney, in a meeting with the Deseret News shortly after the attacks, downplayed any threat posed by Osama bin Laden, explaining instead that the real threat of terrorism against the Winter Olympics lay with home-grown terrorists acting under the flag of animal rights. [...]

His source for that concern? Web sites that encourage protesters to come to Salt Lake City and use the Games as a political forum.

Romney later “backtracked somewhat,” the paper reported, but pointed to anarchist protests at the World Trade Organization conference in Seattle the year before as an example of what could go wrong. To be fair, there had been some incidents of civil disobedience from radical animal rights activists in Utah, and police were monitoring some groups. One activist with Utah Animal Rights Coalition was charged with four felonies for vandalizing a mink farm and freeing the animals a year before, though a judge later dropped the charges. But more dangerous than al-Qaida?

Animal activists told the paper that Romney's concern was "beyond paranoia." The radical Animal Liberation Front did post the article in its entirety on its website, over an ominous background of a man in a black ski mask cuddling a white bunny.

The Anti-Defamation League, which tracks extremist groups, noted at the time, “Groups announcing plans to protest in Salt Lake City include animal rights activists, prison reformers, gay rights advocates, anti-abortion activists, and many others.” But the ADL seemed to be more concerned about the notoriously anti-gay Westboro Baptist Church than the animal lovers.

Mother Jones’ Asawin Suebsaeng noted in January that Romney’s obsession with animal terrorists was in Sen. John McCain’s opposition research book against the former Massachusetts governor during the 2008 Republican presidential primary, though McCain never made an issue of it.