Back off, O'Brien. The comic sends an obnoxious tweet about the Olympian's size, and it only diminishes him 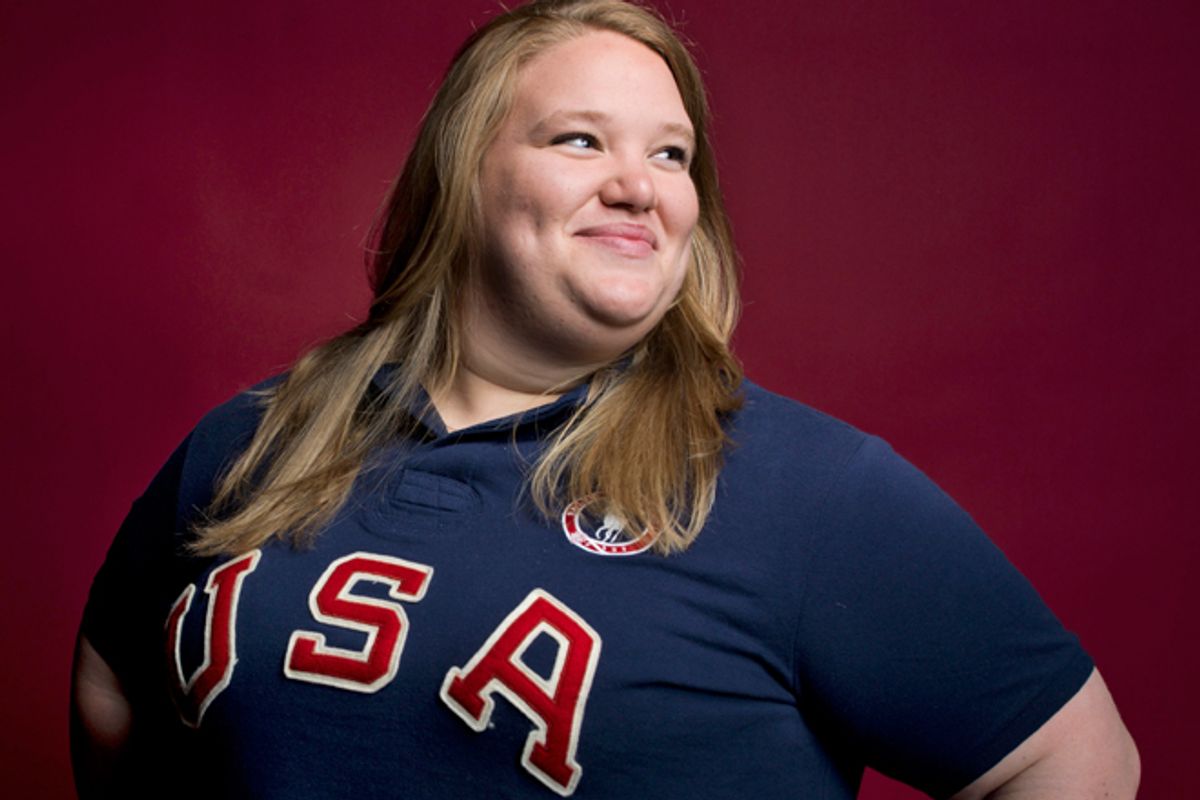 Holley Mangold is a 22-year-old American Olympian. She's our country's best hope of winning a medal in her field -- a sport the U.S. has not achieved any Olympic success in since 2000. She's a powerful athlete whose achievement is even more impressive when you consider that she's only been at for a few years.

But despite her acknowledgment that "When you've got a body like mine, you've got to get used to attention," you don't see Mangold in sexy magazine spreads that provocatively flaunt naked forms. There are no worshipful Bleacher Report features devoted to ranking her hotness. Instead, Holley Mangold, a woman who can do things with her body that few women – or men – can accomplish, gets to be the butt of a joke. On Saturday, Conan O'Brien snarked on Twitter that "I predict 350 lb. weight lifter Holley Mangold will bring home the gold and 4 guys against their will." It was retweeted over 2,000 times. Poorly done, there, Coco.

Mangold is not like other girls. The sister of New York Jets center Nick Mangold, she says when was younger, she dreamed of doing gymnastics at the Olympics, but "my body had a different plan." She played football throughout her childhood and teens, and moved into weightlifting in part because it offered her the competitive future that football couldn't give a female.  Her brother will make over $50 million over the next several years. Holley, meanwhile, has been working a catering gig with a local barbecue house. She sleeps in a twin bed in her coach's laundry room.

That a formidable female Olympian doesn't conform to a traditional hot bikini volleyball chick image has been a source of both befuddlement and easy potshots in the public conversation. You can almost feel the internal struggle of writers as they grapple with how to depict her. Should they joke about her, begging, as New York magazine did, "Please do not hit us Holley we think you are great please do not hit us"? A Chicago Tribune story, meanwhile, noted that "Mangold's fortunes have fluctuated like her own weight," while an L.A. Times story couldn't resist mentioning "the small Ohio town where she grew up — with an emphasis on the word 'grew.'" Or should they go out of the way to make sure the reader understands that this former lineman is still just a girl? To that end, a recent New York Times profile of her devoted a paragraph to her attempts to perfect her makeup. And an interview with Mangold for the Daily earlier this month was titled "Girl Talk" and featured questions about how she struggled with her Olympic makeup look, if she has time for romance, and whether she considers herself "a girly girl." Mangold, by the way, declared herself unhesitatingly "girly" and admitted an aversion to bugs.

That Mangold even has to offer that reassurance to the world is a massive bummer. An incredibly strong, 350-pound woman still considers herself feminine! Well, fancy that! But why wouldn't she be? That's why Conan O'Brien's flippant depiction of her as some marauding she-beast who has to drag off unwilling males is so shabby and dumb and crass. You'd expect more from the guy who famously said, "Work hard and be kind." But Mangold handled the dis deftly (if not well-spelled), replying, "I like your prediction Conan I like it a lot ... just wondering if your one of the guys #dontactlikeyournotimpressed." Holley Mangold, I love you.

It's not a secret to Mangold, who appeared on an episode of MTV's "True Life" titled "I'm the Big Girl," that she's the big girl. As she said in an interview recently, "I'm comfortable with who I am."  If only more people were comfortable with who she is. She says, "I hope when people see that, when they see me, it will give them the self-confidence to follow their dreams, to keep going when others say they cannot do something." Her path has been simple. "My parents just always told me I could be whatever I wanted to be," she says, "and, silly me, I believed them." Mangold just wanted to be something that few people ever get the chance to be. She wanted to be great.

Whether she can take her hoped-for bronze this year in London, Mangold's goal of being an inspiration to others is already well in effect. This morning, as I was preparing this story, I watched a video of her. My 8-year-old daughter watched it with me. "Wow," she said, as Mangold swung her weights high over her head. "She's awesome." That, folks, is the appropriate reaction to Holley Mangold. She is awesome. And if someone who asked for a baby unicorn for her last birthday can figure that out, why is it so hard for so many others? Mangold competes on Aug. 5. However much she can lift over her head on that day, with her powerhouse example of grace, humor and self-acceptance, she's already proven herself one of the strongest women in the world.