The champion gymnast's shocking finish is a reminder that for every medalist, there are many more losers 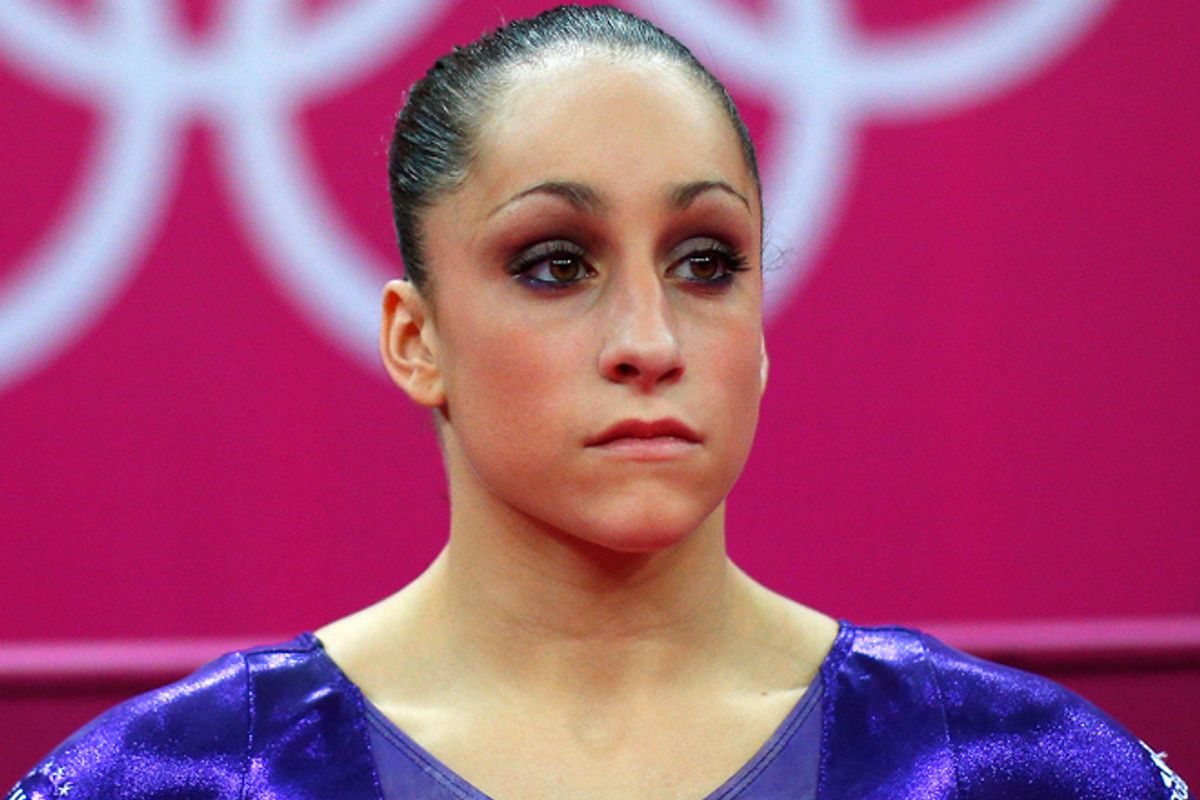 Jordyn Wieber is a controlled crier. At all of 17, wearing a long-sleeved purple leotard and a little too much rouge, her lifelong dream smashed -- not because she'd done anything horribly wrong, but because she hadn’t done it perfectly right -- the gymnast-that-couldn’t put her hands over her eyes and cried, before accepting a shoulder in which to more discreetly sob. Just a few minutes later she hefted on her backpack —  suddenly an extremely poignant, age-appropriate shield — and stared off into the middle distance, listening as the teammate who beat her spoke to a TV crew about the surprising turn of events. Then she went on television herself and, without her voice breaking, describing the outcome as  “disappointing.” The NBC commentator was not nearly so dignified, dramatically declaring, “Quite honestly, it’s horrific.”

Someone always has to lose. As much as we can, we make the Olympics about winners: the feel-good athletes who train for years and years, arrive at this ultimate event, and live up to or exceed their potential. These athletes, gold medal winners or unexpected silver stealers, are rewarded with attention, praise, bling and, should they be photogenic and competing in a popular sport, fame and fortune. But these winners are always beating out someone, and last night’s women's gymnastics qualifying round was a reminder of that. Last night was about the person who trains and trains, arrives at the ultimate event, and doesn’t meet or exceed expectations — a bummer of a story that is also the story of most Olympians.

Wieber is the reigning world champion in the women’s all-around. Going into last night, she and her adorable teammate Gabby Douglas were the co-favorites to win the gold medal in that event. But each national team can only place two athletes in the individual all-around. Wieber’s qualifying score was the fourth-highest in the entire competition, but because it was lower than both Douglas’ and her teammate Aly Raisman’s, Wieber will have to sit it out. Wieber was such the favorite that though the Olympics are on hours and hours of tape delay, the NBC announcers didn’t even begin to alert the viewing audience that something might be amiss with her chances until soon before the final element, the floor exercise. I choose to believe that this is not a sign of NBC’s incompetence, so much as the announcers’ incredulousness: Even given a five-hour grace period, the broadcasters could not exactly believe what was going on.

And what was going on was not a catastrophe. Wieber didn’t miss out because she screwed up horribly — she didn’t fall off the beam or drop off the bars — but because of lots of little deductions throughout the completion, and one extremely significant out-of-bounds heel on her floor routine. If Wieber had bit it on the beam, as Alicia Sacramone did at Beijing, maybe she would have been rewarded with a deodorant commercial (Sacramone had one that aired last night). At least she would have avoided the nail-biting final moments, when the 18-year-old Raisman got a high enough score from her floor routine — performed to “Hava Nagila” — to best both Wieber and Douglas (a fact that NBC, so committed to the “Wieber-Douglas go all the way!” story line, barely even noted).

In gymnastics and figure skating, unlike sprinting or swimming, there is one person in the spotlight at a time, and while they are competing against other athletes, they are noticeably competing against themselves and their nerves: Can they hit the jumps and the tricks and the balance elements they have in practice upon practice? Watching Wieber last night I had a kind of flashback to the emotional horror show that was watching figure skater Michelle Kwan try to win a gold. (Though because of the brutalities of Olympic gymnastics, in which 17 is always better than 21, Wieber, unlike Kwan, probably won’t get to try again in four years.) There was the same pressure, disappointment, sadness, stress and stark thanklessness of being the over-dog, the person who can never exceed expectations, only meet or disappoint then.

But for all the Wieber sadness, the joy of winning, especially as the underdog, was on display last night too. Raisman earned herself a spot in the women’s all around and was ecstatic about it. I was happy for her, but even happier that her parents — the breakout stars of last night’s broadcast — will continue to be complete and total spazzbasket, stressballs in future events. In a moment of television brilliance, NBC showed Raisman’s parents watching her uneven parallel bars routine, with Aly’s mother vocalizing her immense anxiety with twitchy, bossy commands and spazzy body language, easily the best visualization of parental anxiety I’ve ever seen. When Aly qualified, both of her parents burst into tears. More of them, please.

Because NBC failed to play up Wieber’s downfall until close to the end of the broadcast, there was lots of time to just enjoy the gymnastics and its oddities. There's the always strange fact that the these hardcore athletes wear makeup; the intense and convoluted psychology of the chirpy hugs and “good jobs” the girls -- teammates and also rivals -- give each other; vault specialist McKayla Maroney, a sleek little alien with one of the most wondrously haughty athletic bitchfaces of all time; Douglas and her big smile, easily the most likable gymnast we’ve had in decades, positioned now to take the medal and all the money. And there's the inelegance of the balance beam, which makes a group of women who can tumble, soar, and flip through the air look awkward and ungainly, such an extreme mental crucible and physical challenge that wobbling on it like a novice tightrope walker is the best people who don't obey the typical laws of gravity and grace can do.

As a piece of broadcasting, NBC did a bad job at providing certain context last night: What were the other teams' scores? What do the scores really mean? What elements are actually difficult, and why? How much of the judging is subjective? But they made up for it with three shots: the segment of Raisman’s parents, the absolutely brutal, exploitative two-shot of Raisman talking to a reporter with a despondent Wieber in the background, and the close-up on Wieber’s feet on the balance beam, her toes gripping and gripping and keeping her on that beam, even as her heels flew up. She held on that time, but it wasn’t enough.