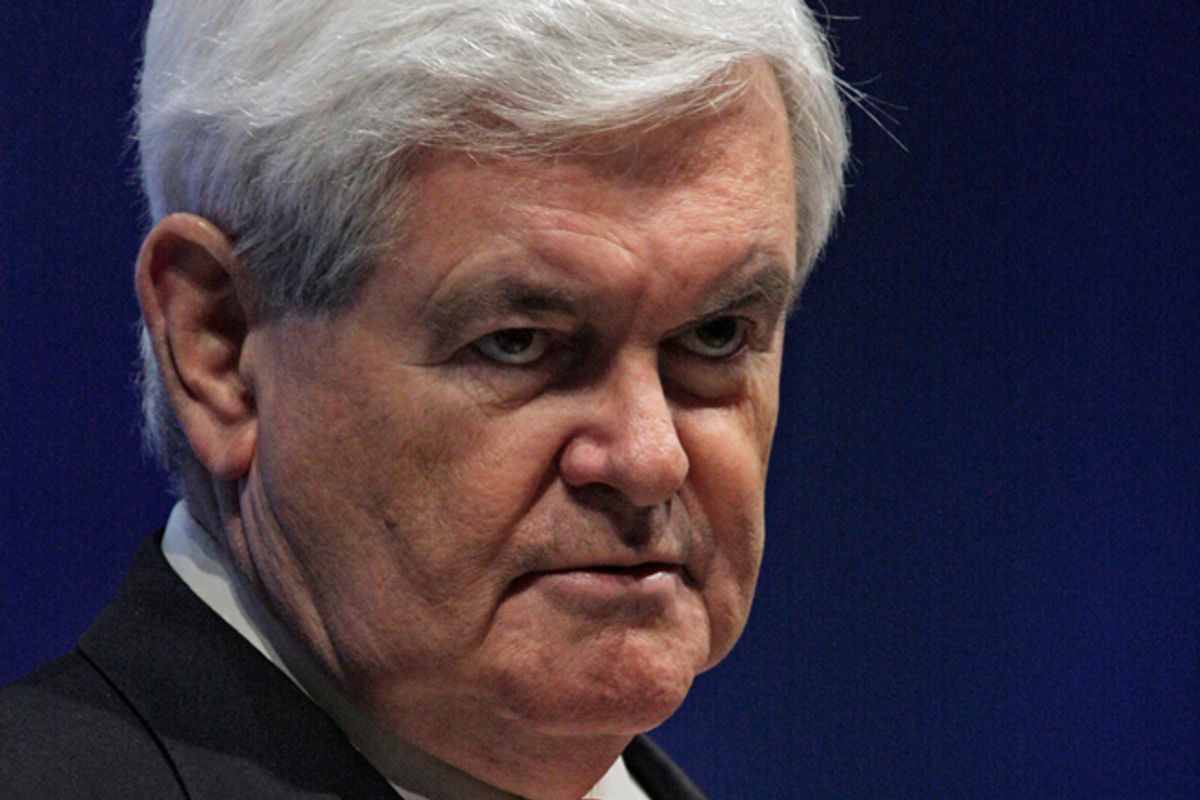 When Politico first began spewing its pollution back in 2007, I wrote a series of posts examining its ownership and management, its heavy reliance on Drudge links, its biases, and its tawdry methods, and had a lengthy exchange with its Editor, John Harris, about those critiques. I long ago stopped doing that: aside from the handful of genuinely good reporters they have, it is widely recognized that Politico is little more than a glorified gossip rag, the belly of the media beast, the embodiment of everything vapid, reckless, and petty that drives America's media rot. Pointing out the latest examples is pointless and redundant.

But today Politico descended into territory so toxic that one would be remiss to ignore it. They gave Newt Gingrich almost 5,000 words to warn America of the grave danger posed by Muslims, to condemn "elites" for covering up the threat, and to defend the recent McCarthyite attack by GOP Rep. Michele Bachmann and four other members of Congress on Huma Abedin, the long-time Muslim aide to Hillary Clinton and wife of former Rep. Anthony Weiner, whom Bachmann essentially accused -- with zero evidence -- of being a secret agent for the Muslim Brotherhood (Politico gave Gingrich 2,500 words for the Op-Ed itself  -- headlined: "In defense of Michele Bachmann, Muslim Brotherhood probes" -- and then another 1,800 words for an "appendix" prepared by the neocon-funded, Muslim-obsessed Foundation for the Defense of Democracies). This was the crux of the Bachmann accusations which Gingrich is defending:

"It appears that there has been deep penetration in the halls of our United States government by the Muslim Brotherhood," Bachmann told radio host Sandy Rios in June. "It appears that there are individuals who are associated with the Muslim Brotherhood who have positions, very sensitive positions, in our Department of Justice, our Department of Homeland Security, potentially even in the National Intelligence Agency."

Then, "Bachmann singled out Huma Abedin" and "question[ed] why Abedin . . .  was able to receive a security clearance despite having family members that Bachmann believes are connected to the Brotherhood."  Bachmann wrote: "I am particularly interested in exactly how, given what we know from the international media about Ms. Abedin’s documented family connections with the extremist Muslim Brotherhood, she was able to avoid being disqualified for a security clearance." Bachmann was joined in her crusade by four other House members (Gingirch calls them "The National Security Five," because nobody does self-victimizing, self-martyring melodrama like neocon Tough Guys).

So noxious was this attack that even people like John McCain and Wolf Blitzer -- along with Catholic bishops and other religious groups -- harshly condemned it (though it seems clear that the anger in official Washington was due more to Abedin's being deeply ensconced in Beltway power circles than it was due to revulsion over the rank Islamophobia underlying the attack; said Blitzer: "I have been very upset about a McCarthy-like attempt to smear one of Secretary of State Hillary Clinton's closest aides, Huma Abedin, someone I have known for years"). Let me know when Islamophobic law enforcement and Surveillance State practices aimed at marginalized, powerless Muslims provoke similar rage in those circles.

Most of Gingrich's Op-Ed is just standard fare Islamophobia: Muslims-are-Terrorists-and-only-I'm-brave-enough-to-say-so fear-mongering. But the part of the Op-Ed that is notably pernicious is when he defends Bachmann's smearing of Abedin's loyalties -- through nothing but rank innuendo, and without the courage or decency even to name her. After listing a series of Obama State Department policies that Gingrich believes evinces excessive Muslim sympathies, he unleashes a series of cowardly smears in the form of "questions" that would make the infamous Wisconsin Senator blush. Just behold this slimy McCarthyite outburst that Politico published:

The underlying driving force behind this desperate desire to stop unpleasant questions is the elite’s fear that an honest discussion of radical Islamism will spin out of control. They fear if Americans fully understood how serious radical Islamists are, they would demand a more confrontational strategy.

Former British Prime Minister Tony Blair warned last week, "The West is asleep on this issue." Islamist extremists, Blair asserted in an interview with The Telegraph, seek "supremacy, not coexistence" . . . .

Therefore, whose advice we rely on becomes central to national security. Asking who the advisers are, what their prejudices are and what advice they give is a legitimate — indeed, essential — part of any serious national security system.

It was this question that the National Security Five focused on. They were right to do so and it weakens national security for them to be attacked for simply asking basic questions. . . .

Isn’t it legitimate to ask: Who advised Clinton to launch a counterterrorism initiative that excluded Israel?

Isn’t it also legitimate to ask: Who advised Otero to give a major speech on terrorism and ignore the attacks on Israel and Israelis? . . .

Isn’t it legitimate to ask: Who advised the Obama administration to erase Jerusalem from Israel?

Isn’t it fair to ask: Who went back and forged public documents and who told them to do it? . . . .

Isn’t it appropriate to ask: Who were the Muslim chaplains approved by this extremist? How did he get chosen to be in such a key position? What system of checking for extremism broke down so badly, or is so biased, that it allowed members and allies of radical Islamist organizations to play key roles in the U.S. government?

Framed as a defense of Bachmann and the "National Security Five," as well as a warning about the Islamic menace, all of this implies -- with zero basis, relying on nothing but gross innuendo masquerading as innocent questions ("isn't it fair to ask?") -- that there are unknown, disloyal Muslims lurking behind State Department policy, plotting to promote Islamic radicals and undermine America and Israel, and that one of them is likely Huma Abedin, the person singled out by Bachmann.

I'm all in favor of having Op-Ed pages publish diverse views (let me know when Politico publishes an Op-Ed on how endless killing of innocent Muslims by America's foreign policy motivates the sort of radicalism about which Gingirch warns). But for a minimally ethical media outlet, even Op-Eds have to meet basic standards of responsibility and evidentiary support with regard to the claims it asserts. Newt Gingirch's bigoted, McCarthyite screed -- calling for an investigation into unknown, unseen Muslim forces that have infiltrated the U.S. Government -- falls as far below those standards as one can get. Politico not only published it, and is not only heavily promoting it on its front page, but devoted more space to it than almost any other single Politico article or Op-Ed is ever given. We find, yet again, that Islamophobia is by far the most acceptable form of overtly expressed bigotry in mainstream American precincts.

Mitt Romney went to Israel this week and issued extreme pledges of fealty to Israeli government policy, but Israeli journalist Noam Sheizaf documents that a prominent Jewish Democratic Party group quickly attacked Romney and the GOP from the neocon right, insinuating that -- unlike Obama and the Democrats -- the GOP nominee and his party lack sufficient devotion to Israel.