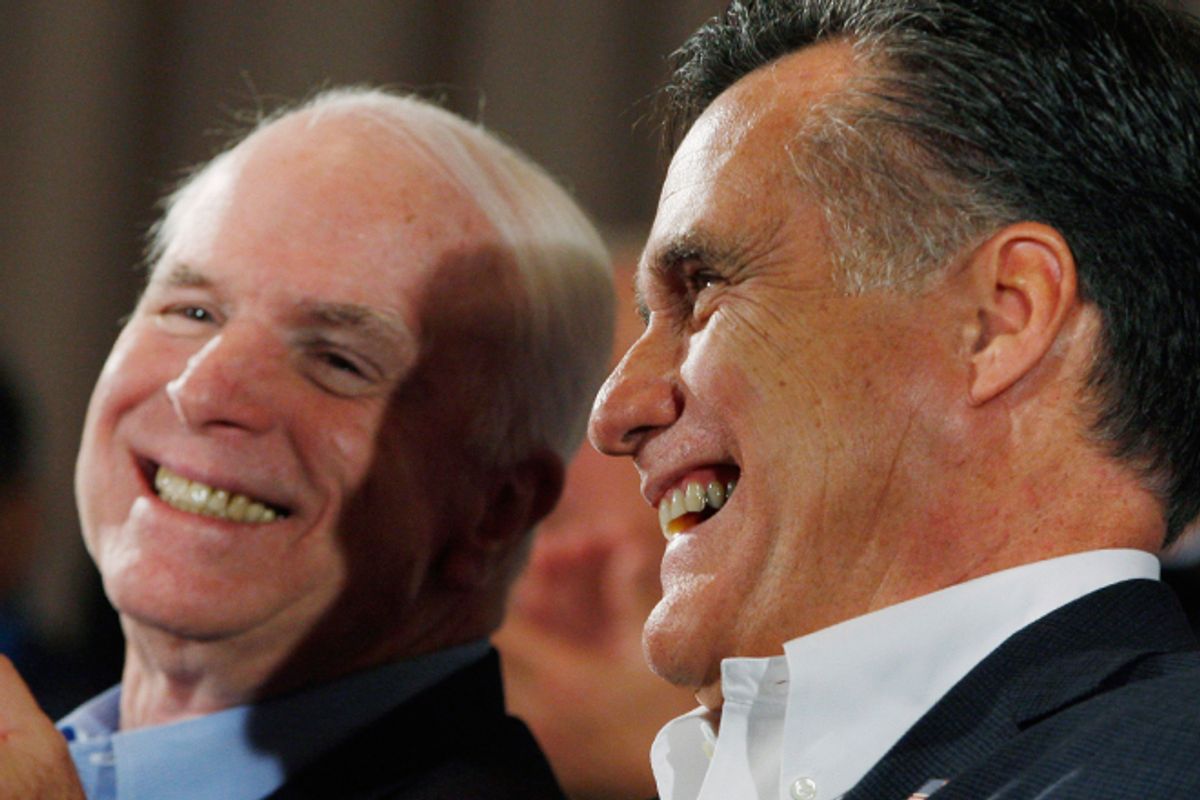 Howard Kurtz, whose usual beat (for the last 20+ years) is media reporting, not politics, has a story in this week's Newsweek claiming that John McCain is desperate to help Mitt Romney, but Romney is apparently not seeking the legendary maverick's assistance.

The headline says McCain staged a campaign intervention for Mitt Romney, but that apparently happened months ago, during the primaries. (McCain and his BFF/sidekick Lindsey Graham called Romney and told him not to say "self-deport" anymore.)

McCain is I guess disappointed that Romney won't take his advice on foreign policy issues (bomb everywhere forever) and immigration (be a little bit less anti-immigrant) and also no one invited McCain to speak at the convention.

We get another wonderful iteration of the "Obama failed to reach out to McCain" story:

The other glitch was his strikingly antagonistic relationship with Obama. Despite a fence-mending meeting at the White House last year, the president never called again. McCain contrasts Obama’s aloof approach to lawmakers with that of Bill Clinton, who “was remarkably good to me.” In fact, McCain told me that he and Clinton chatted about policy in occasional phone calls during his 2008 campaign, even as the former president was backing Obama.

I never get sick of hearing this. Obama's legendary "aloof approach" forced John McCain to be a bitter, petty man who holds grudges forever after minor perceived slights! He only got one invitation to the White House!

I can't even really figure out the point of this story. At least Kurtz got most of his sources -- McCain and Steve Schmidt -- to speak on the record, which is better than your average Politico non-story, but it doesn't really strike me as odd or unusual that Romney is not making a man who lost badly to Barack Obama a major surrogate in his campaign to beat Barack Obama.

It's especially unsurprising because Romney, a supremely self-confident man, doesn't care to take advice from anyone not already in his inner circle. He thinks he and his hand-selected staff know best, and he doesn't give a shit what anyone else thinks.

That analysis would seem to be contradicted elsewhere in Newsweek (on the cover), where we learn that Romney is actually a "wimp." How is he wimpy? Well, Newsweek called another guy wimpy once and it got a lot of attention so Romney is also definitely a wimp.

Poor Michael Tomasky is forced to write a Romney analysis shoehorned into a desperate retread of one of the half-dozen Newsweek covers people still sorta remember -- the one where they called George H.W. Bush a wimp. It was a silly cover, and one that presaged much of the worst aspects of modern presidential campaign coverage, like the elevation of some amorphous pundit-based "perception" of a candidate over the actual tangible facts of his story and positions. It's remembered mainly because it made Bush mad (and it should have, the guy was a war hero!). What's worse about this one is that it's not even close to being accurate. Romney is indeed a stiff, rich twit, and a guy who was horrible at athletics as a kid, and a guy who says "gee whiz" or whatever, but he's not a "wimp." He's a bully! He bullied other kids in school, he was arrested for mouthing off to a cop who dared to question him on a minor violation, he publicly berated a teenage volunteer traffic cop at the Salt Lake games and then refused to apologize, and he generally loses his temper at any time he's challenged by anyone he considers a subordinate. And he considers just about everyone a subordinate!

Poor Newsweek! They'll get this "weird blog that comes out once a week and is on paper" thing right one of these days.