Mitt Romney blames the weak Palestinian economy on their "culture," leading to accusations of racism 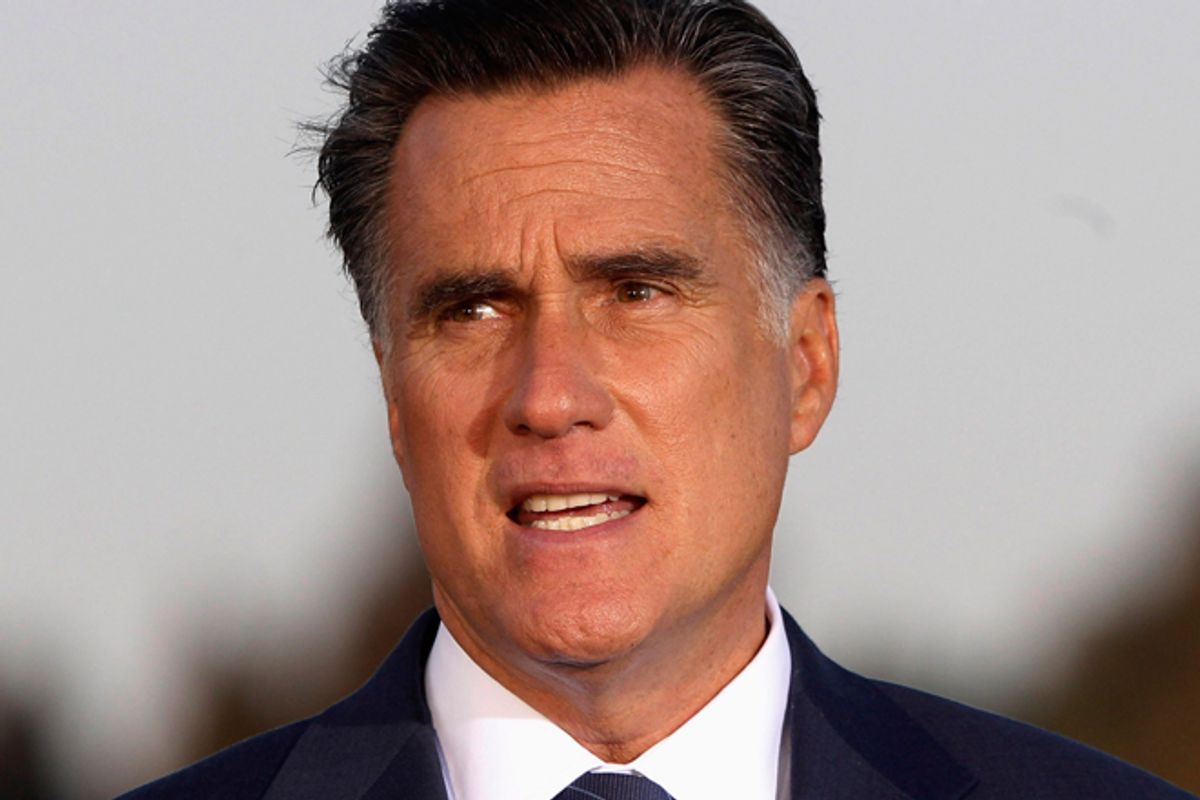 The Israeli-Palestinian conflict is one the most defining international issues of our day, but Mitt Romney completely ignored it during his trip to Israel, which ended today. The closest he came to acknowledging the existence of  the conflict was at a breakfast fundraiser today in Jerusalem, where he said the Palestinian territories’ economy is worse than Israel’s because their culture is inferior. He completely ignored the effects of the Israeli occupation.

The comments drew immediate condemnation from Palestinian leaders. Saeb Erekat, a senior aide to Palestinian President Mahmoud Abbas, said the comments were “racist” and show that “this man lacks information, knowledge, vision and understanding ... He also lacks knowledge about the Israelis themselves. I have not heard any Israeli official speak about cultural superiority."

History has shown that "culture makes all the difference” in determining which economies thrive and which fail, Romney said, citing "The Wealth and Poverty of Nations" by David Landes and "Guns, Germs and Steel" by Jared Diamond. This dynamic was perfectly evident in the Middle East, Romney continued, where Israel has a much stronger economy than the Palestinians. He guessed the difference was about the same as that between the U.S. and Mexico.

But as Romney often likes to remind us, government restrictions on commerce can be bad for the economy, and there are probably few places on earth where commerce is more restricted than in the Palestinian territories. The Gaza Strip has had its borders almost completely sealed since 2008, forcing merchants to use illegal tunnels to Egypt controlled by militants to import or export goods. The West Bank is better, but still faces enormous restrictions on what it can and cannot import or export, and the movement of people is also heavily restricted. Both the World Bank and the International Monetary Fund have said the Palestinian economy can only grow if Israel lifts these restrictions, the AP notes.

Meanwhile, Romney vastly underestimated the economic gulf between the two economies. He guessed the gross domestic product per capita difference between Israel and the Palestinian territories to be about 2-to-1, along the lines of the U.S. to Mexico. But in fact it's more like 20-to-1. Israel's GDP per capita is about $31,000 compared to just $1,500 for West Bank and Gaza, according to the World Bank.

The Romney campaign said the AP had “grossly mischaracterized” the candidate’s statements, but offered no exculpatory context or information.

It’s another embarrassing, unforced error during Romney’s international trip, which was designed to make him look competent and presidential abroad, but may end up doing the opposite. But unlike his gaffe in London, which was merely impolite, his comments in Israel suggest a lack of understanding about a real foreign policy matter of tremendous importance. He may not take as much heat from this one as from the Olympics one, since Palestinians are a less sympathetic victim in the eyes of the GOP and many in the media, but it is revealing nonetheless. Needless to say, it’s not ideal for the guy who wants to be president to show up and extemporaneously diagnose a complex millennia-old conflict armed only with two pop-history books he picked up at Amazon.