Rise of the new atheists

Should non-believers make an alliance with religious progressives? 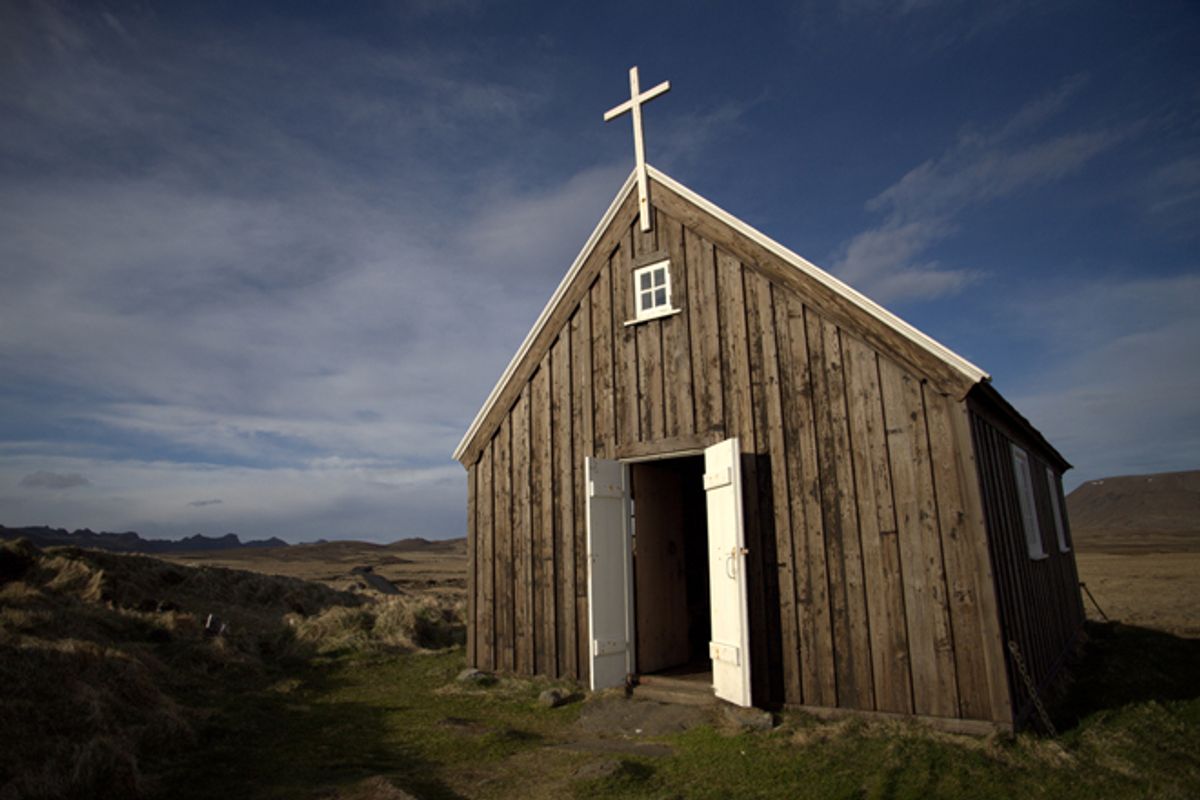 In the last two decades, and with relatively little notice, a demographic change has been occurring across America that has seismic implications for the future of our politics. Quietly, without much fuss, but with historically unprecedented speed, the number of atheists in this country is booming.

In 1990, the percentage of American adults who professed no religion in surveys stood at 8 percent. But by 2001, that number had almost doubled to 14 percent of the population, or about one in every seven people. Now, the most recent polls are finding even higher numbers: the 2008 American Religious Identification Survey (ARIS) found 15 percent, the 2010 General Social Survey found 18 percent, and a Pew Research survey from late 2011 reported 19 percent, an all-time high-water mark. Throughout this same time period, all the country's largest religions reported membership that was either flat or declining. And since the upcoming generation, the so-called millennials, is both the biggest and the least religious generation in American history, this trend is poised to accelerate in the decades ahead.

The usual response is that this trend may represent a falling away from organized religion, but not necessarily a receding of faith per se. After all, a person could still believe in God without choosing to identify with any church in particular. This is surely true of some of the "Nones," but not all of them, and probably far fewer of them than you might think.

The 2008 ARIS, for example, found that those who explicitly identify as atheist or agnostic make up 1.6 percent of America's population, or about 3.5 million people. This alone would be more than the number of Jews or Muslims in America, and about the same as the number of Mormons. However, the ARIS didn't stop there: The researchers also asked more in-depth questions about the respondents' beliefs. What they found is that whether they choose those words to describe themselves or not, 12 percent of Americans are atheist or agnostic, professing no belief in a supernatural power. This is about as many people as all the mainline Protestant churches -- Methodist, Lutheran, Presbyterian, Episcopalian and United Church of Christ -- combined.

The gap between the number of Americans who are atheists and the number of Americans who call themselves atheists doubtless has a lot to do with the social stigma attached to that dreaded "A-word." In highly religious communities, a person who comes out of the closet as an atheist can expect ostracism, bullying, persecution and even violent threats. This fact is witnessed by the experiences of young nonbelievers like the high school activist Jessica Ahlquist, who filed a successful lawsuit last year against an illegal "School Prayer" banner in her public high-school auditorium and was targeted by a flood of hate mail and death threats, and shunned within her school and her community. All this happened not in a blood-red Bible Belt town, but in a prosperous metropolitan suburb of Providence, R.I.

But as the numbers of the nonreligious grow, a political movement is coalescing to fight that stigma and lessen the prejudices often aimed at the godless. This movement is made up of old stalwarts that have existed for decades, like American Atheists or the Freedom From Religion Foundation, partnering with newer groups like the Secular Coalition for America, which gives the nonreligious a voice in Washington, or the Secular Student Alliance, which assists nonbelieving young people to form clubs at hundreds of high schools and colleges across the country. Its best-known public representatives are, of course, people like the British biologist Richard Dawkins or the recently deceased Christopher Hitchens, the authors of fiery polemical books like "The God Delusion."

This emerging movement has been dubbed the "New Atheism," although there's nothing genuinely new about it, either in tone or in content. The Western world has long had outspoken skeptics and critics of orthodoxy; it's just that in past eras, they were often persecuted or silenced by mob rule or force of law. The only thing that's new about the New Atheism is its growing influence and success, which are accompanied by increased confidence and assertiveness. In a country where the Christian right wields such a huge megaphone, all progressives should view this as a hopeful development. The rise of the New Atheism as a political force has the potential to roll back the religious right's influence across the board, and to be a positive force on issues like secularism in government, choice and reproductive rights, gay rights, teaching science and evidence-based sex ed in schools, Middle East policy, even environmental policy.

Nevertheless, some religious progressives have greeted the New Atheism with less than open arms. For instance, this recent column by James Rohrer inveighs against "militant secularists" who "employ derogatory language" to talk about religion. Like many liberal critics, he accuses the New Atheists of being too sweeping and too indiscriminate in our attacks, and chides us that we should learn to cooperate with moderate religious people rather than arguing against them.

Now, I believe that American atheists can and should make alliances with religious progressives to advance causes on which we agree (and we've done just that, such as with the secular charity Foundation Beyond Belief's "Challenge the Gap" program). But we can do that without surrendering our right to criticize them in areas where we disagree. To insist on anything else is to insist that any alliance between us must be founded on religious supremacy and atheist subservience. Given the numbers that atheists can bring to the table, this would be foolish and arrogant.

The question remains, however, of why the New Atheists believe that criticizing all religion is an effective political tactic. There are two reasons most often given for why we think this.

For one thing, religious belief is widely viewed in America as a good thing, a reliable sign of moral character and trustworthiness. This leads to the corollary that bigotry perpetuated in the name of religion is somehow more justifiable or more deserving of respect than any other kind of bigotry, which has excused countless outrages against human dignity and equality. The New Atheists seek to defeat this harmful belief at its source.

To accomplish this, we believe it's necessary to shock people out of their complacency by pointing out the evils that religion can cause and is continuing to cause, even if some liberal religious people feel like collateral damage. In reality, the critiques that we level against religion are little different than those that are routinely heard in economics, politics or many other areas of human inquiry; it's just that most religious institutions are accustomed to an abnormal degree of deference and respect.

Second, and probably more controversial, the New Atheists argue that moderate religion enables and strengthens fundamentalist religion. Even when they don't endorse the specific beliefs of fundamentalists, religious moderates and liberals endorse the general worldview that faith is a virtue, that the Bible should be the basis for our morality, and that obeying what one believes to be God's will is a sufficient basis for decision-making. We assert that all these beliefs are disastrous, that accepting them leaves one with no real defense against the siren song of aggressive fundamentalism.

If you accept that faith is a valid and acceptable way of making decisions, there's no effective reply to those who use faith to come to bad conclusions. When religious liberals say that the Bible is a good and wise book, or worse, that it's the supreme source of morality, how can they object when fundamentalists say that all our laws should be based on the Bible? How can they object when the religious right cites verses from the Bible that command the subordination of women or the criminalization of homosexuality? The only reply that a progressive religious person can make is to say that they don't believe God desires that, and when the debate comes down to conflicting assertions about God's will, the cast-iron certainty of the fundamentalists will usually carry the day.

The general and uncritical acceptance of faith as a virtue creates an atmosphere in which poisonous fundamentalism can breathe and thrive. By contrast, the New Atheists believe that everyone is better off when personal morality is based on reason and conscience, not obedience to ancient texts or unelected authority figures. We believe that the Bible and other religious texts are outdated and archaic at best and deeply morally flawed at worst, and that as long as we treat these texts with a reverence they don't merit, they'll be perpetual engines of extremism to people who take the time to read them. We believe that society will be more just, more prosperous and more peaceful when elected officials can set policy based simply on a reasoned weighing of the evidence, and not appeals to scripture. Thus, our claim is that by weakening the power of religion, both religious liberals and secular humanists stand to gain.

Will it drive people away to attack their deepest beliefs? Our answer is that, whatever they say they believe, people respond to passion and conviction, not to artful diplomacy or rhetoric watered down for political expediency. Ironically, in this respect, it's the defenders of religion who are demeaning ordinary Americans. It's they who are saying, implicitly, that the average person is irrationally stubborn and unintelligent and can't be expected to respond rationally to criticism of their beliefs. It's they who are saying that ordinary believers aren't mature enough to cooperate politically with people who don't make an effort to flatter them at all times.

We New Atheists give people more credit than that. We believe that that if we speak our minds, people will be capable of judging our argument on the merits, and if we're honest about what we think, they'll come to respect our sincerity even when they don't agree with us. In short, we believe that if we treat people like rational adults, they'll live up to that standard. It might seem a misguided hope given what we're fighting against, but then again, the demographic trend suggests that our approach is exactly right.