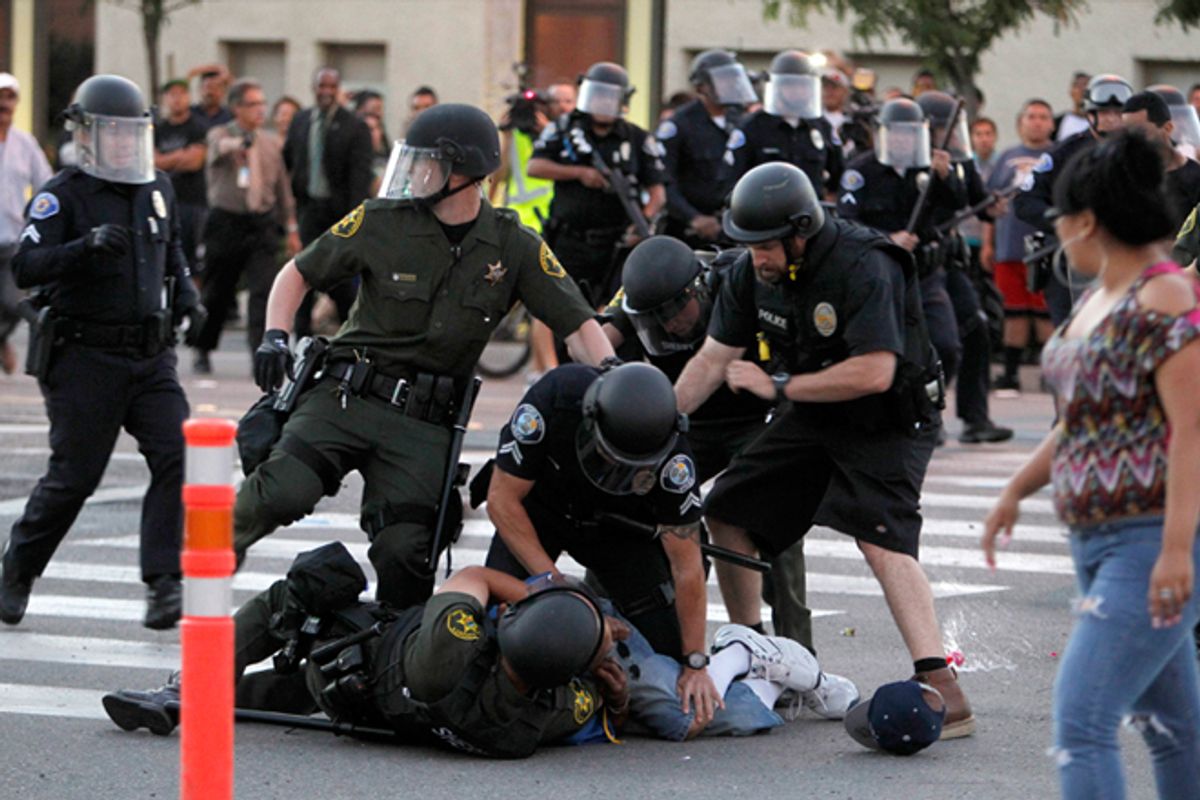 A protester is arrested by police officers as protesters try to occupy the intersection of Anaheim Blvd. and Broadway to demonstrate against recent police shooting in Anaheim, Calif. (Reuters/Alex Gallardo)
--

Images coming out of Anaheim, Calif. -- best known as the home of Disneyland -- would suggest that the Magic Kingdom is under siege. Police SWAT teams, donning military fatigues and clutching what look like grenade launchers, blocked streets around the park just days after riot cops sent a barrage of less-than-lethal ammunition, including a gnashing police dog, into a crowd of men, women and young children; militarized police watched over street gatherings from surrounding rooftops.

The militaristic spectacle comes in response to an upsurge in already regular police brutality protests in Anaheim. In the past 10 days Anaheim police shot dead two young Latino men -- the fourth and fifth fatal police shootings in the area this year alone (four of which involved Hispanic men). This is Anaheim, outside of the Happiest Place on Earth™; a long-festering situation of inequality and police aggression falling -- as is so often the case -- along racial fault lines and beyond the media gaze.

Ten days ago, police handcuffed Manuel Diaz, 25, as he lay face-down in the grass outside an apartment block. The unarmed young man did not resist -- he had already been shot in the back of the head after an incident that police have not described. Just a few hundred feet away police violently dispersed a crowd that gathered to see the commotion; video footage of beanbag and rubber pellets aimed at close range, as well as a police dog unleashed and bounding at a distraught woman carrying her baby, soon went viral. The very next day, Joel Mathew Acevedo, 21, also was shot dead by Anaheim police officers. Acevedo reportedly had opened fire on police, but was fatally shot while running away. Since then, protests both riotous and calm have brought SWAT teams to Anaheim, keen to neutralize dissent in Disneyland's home.

"The police response in these events seemed more aggressive than other events I have been to," Tim Pool, a Los Angeles videographer well known for live-streaming major Occupy actions, told Salon. "There was no warning given by the police before firing riot weapons at the crowds," said Pool, who traveled to Anaheim early last week to cover the growing protests and witnessed angry local residents riled by police throwing rocks at officers, as well as a somber sunset vigil. On the fourth night of protests, crowds set fire to trash cans and smashed a Starbucks window, leading to police again firing pepper spray pellets and bean bag rounds and arresting 24 people. Two days ago, police arrested nine more as a crowd over 200-strong tried to march on Harbour Boulevard, Disneyland in their sights.

As with the police shooting of Oscar Grant in Oakland, Calif., in 2010, Sean Bell in New York in 2006, Amadou Diallo in New York in 1999, and London's Mark Duggan last year, the recent Anaheim killings seem to have catalyzed, not caused riots and mass demonstrations. “Riots don’t just happen," Clemmet Price, a Rutgers University-Newark historian and researcher into civil unrest, told the Huffington Post with regard to events in Anaheim. “There is a long, complicated history that would make a city susceptible to something like that," he noted. And, indeed, in a city of 341,000 people -- nearly half of whom are Latino -- the concentration of wealth, power and political office in a small minority of whites provides the context of long-simmering tensions, profoundly exacerbated by the actions of a majority white police force.

Although last week's angry street eruptions have given way to calmer protests in recent days in Anaheim, it's hard to imagine that the spectacle of militarized police and unmarked vehicles surrounding Disneyland will serve to long sedate a furious city. It seems as if the Happiest Place on Earth™ would now forever be associated with the image of Manuel Diaz twitching and dying in the grass, or that of a police dog bounding toward a young mother, or of burning trash cans, or heavily armed police in full combat gear. But, then again, I was in London last week, where riots spread and burned for a week last year, sparked by a police shooting, but where now an extensive security apparatus is overseeing an Olympic spectacle, the city's unresolved tensions and ongoing cruelties cleared from international view, replaced with gleaming Olympic venues and propaganda, worthy of Disney.