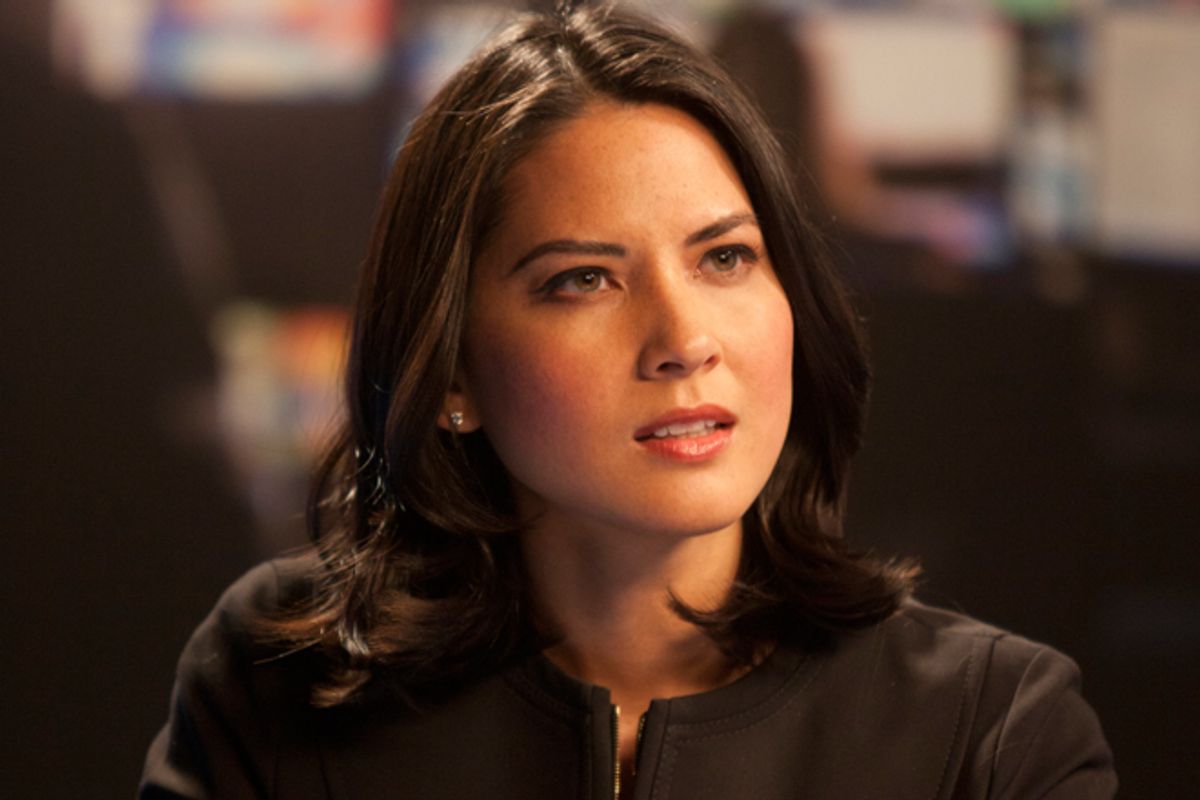 Olivia Munn in "The Newsroom"
--

I’m going to try something a little different with “The Newsroom.” I’m going to say something nice about it. This past Sunday's episode, called "Bullies," was, as usual, risible in many ways — the recycling of various “West Wing” plots, the inappropriate shoehorning of romantic comedy beats into just about any scene, a 20-something who works in media thinking “LOL” means “lots of love”… Wait, I was trying to be nice! But it also featured one of the best scenes of the season (that is not meant to be damning with faint praise), an electric office showdown anchored by an excellent, strong-headed performance from none other than Olivia Munn.

As Sloan Sabbith, the very qualified economist with not incidentally great legs, Munn had been most notable to me thus far for her excellent eyewear. It’s not that Munn or the character have been bad — and in the scheme of "The Newsroom’s” skepticism about women’s competence, intelligence and ability to stay upright, at least Sloan can explain the Glass-Steagall Act and doesn’t have to do subtraction on her fingers — so much as unformed. As performed, Sloan is a bit aloof and spacey, not quite comfortable around all the amped-up, workaholic inhabitants of the newsroom. But as written, she’s supposed to have some additional, more serious social deficiencies, with other characters regularly talking about how she’s terrible at reading people (thus the whole story line where she sets Will up on date with a woman with a handgun, or the ludicrous moment in this most recent episode when she tells Don she’s not good at forecasting other people’s feelings). If Sloan were being performed by another actress, I suspect that she would be stranger and spazzier, more in line with Mac and Maggie and their antic vibe. But Munn’s innate, high-functioning-stoner energy (which she also displayed in “Magic Mike”) has kept that in check, while also keeping Sloan from coming into focus. But she came into focus on Sunday, with Munn’s tamped-down performance paying off. When the relatively calm, grounded woman finally loses it, that’s a lot more dramatic than when one of the series’ zany, frenetic screwballs — i.e. everyone else on the show — screams his or her head off for the umpteenth time.

Sunday’s episode was set during the meltdown of the Fukushima nuclear reactor. Sloan — who, like Munn, speaks fluent Japanese — learned from a spokesperson of the nuclear plant, off the record, that the problems with the reactor would likely be upgraded from a Three Mile Island-size disaster to a Chernobyl-size one. Filling in for an anchor on one of the prime-time news shows, Sloan, all fired up by a pep talk from Will McAvoy, manhandled and bullied her two guests, the spokesperson and his translator, repeatedly correcting the translator’s translations, eventually breaking into Japanese herself, and finally revealing the information she had gotten off the record without any on-air confirmation that this was actually true.

The killer scene immediately followed this on-air meltdown. Sam Waterston’s Charlie and his muppet eyebrows stormed into the newsroom and began screaming at Sloan for all her egregious mistakes. Through six episodes, we have learned that Charlie’s leadership strategy is basically to be more emotional -- or pretend to be more emotional -- than any of his subordinates, so that they end up catering to his feelings and not the other way around. As Charlie berated and berated Sloan, Munn transformed from a nervous, scared person into a hurt and quietly angry one, her eyebrows slashing a deeper and deeper V across her forehead, as she worked hard not to cry. Charlie is used to dealing with people who don’t need any warmup to hit the apex of their outrage — if he starts to yell it’s because Mac or Will are already yelling, or are about to be, and once Charlie matches them, he can begin to wear them down. But Sloan is almost alone in this batch of Sorkin characters as someone whose default mode is neither hyper-defensive nor hyper-vocal. She needs a little time to get to her angry place: Charlie’s strategy pushed her to it. (Imagine if he’d come in softly. Sloan probably would have been crying before he was through with one “I’m so disappointed in you.”)

By the time Charlie screamed at Sloan, “You’re suspended with pay,” he’d been castigating her for five minutes, yet another one of the episodes titular bullies, and Sloan had had it. “I don’t want the goddamn pay!” she fired back. Waterston, looking like a skinny bull pawing the carpet, retorted, “Don’t front off with me, girl!” “Don’t call me girl, sir,” Sloan spit back. If this last line was a little bit too perfectly, cloyingly Sorkin, both a meta-acknowledgment of his own well-documented misogyny issues  and another example of his creepy authority fetish (if Sloan had forgotten that “sir” she really would have crossed the line), for once I didn’t really care: It worked as drama too. There felt like there were stakes, and not just emotions goosed by a Coldplay song, a “Rudy” reference, or some sort of kangaroo court for journalistic best practices. It was a tense, fierce moment, something made possible by a character and an actress given the space and the direction to be surprising. If the scene had ended right after Don told the room to “calm the fuck down” it would have been just about the only scene in “Newsroom” history to end where it should have. Instead Charlie marched back in to explain the difference between Sandra Bernhard and Sarah Bernhardt. Oh well.