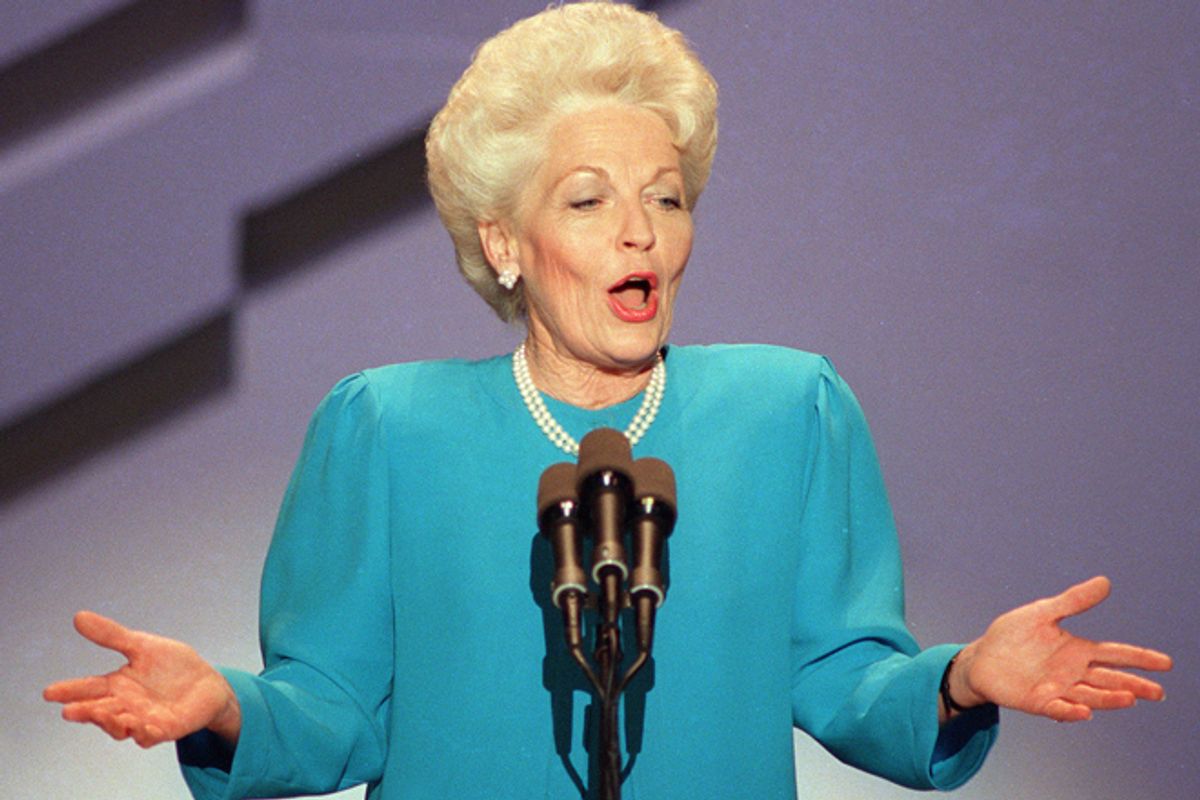 Ann Richards delivers the keynote address at the Democratic National Convention in Atlanta on July 18, 1988. (AP)
--

You may not have heard of Julian Castro – yet – but he was just handed a priceless opportunity to enhance his future political prospect: the keynote speaking slot at September’s Democratic convention.

That means that the 37-year-old Castro, who was elected mayor of San Antonio in 2009 and reelected last year, will address a prime-time audience on the convention’s first night (which, in a break with tradition, will be on a Tuesday this year, with Democrats trimming their convention to three days from the customary four). His selection signals the party’s desire to maximize its advantage among Latino voters, a growing voting bloc where Mitt Romney and the GOP face a particular struggle.

But it’s also a chance for Castro to radically enhance his visibility in his home state and nationally. It’s true, as Jonathan Bernstein points out, that conventions aren’t what they used to be – that the infomercial packaging and lack of suspense has led television networks to devote less and less time to their coverage every four years. But in a way, this has actually increased the value of the keynote gig, which now stands as one of the very few speeches that the media makes a point of covering.

Recent history speaks to the career-making potential of the keynote slot, though as you can see, it’s hardly automatic that the chosen speaker will parlay his or her moment into something bigger:

1972, Reubin Askew: A racial progressive who’d been elected governor of Florida two years earlier, Askew was chosen to showcase the new, post-civil rights South. But it really didn’t matter. The Miami Beach convention was an all-around disaster, remembered best for the floor fights and pointless delays that pushed George McGovern’s acceptance speech well past midnight. Askew did go on to run for president in 1984, though his campaign is about as well-remembered as his keynote moment.

1976, John Glenn and Barbara Jordan: There were actually two keynote speakers at the Democrats’ ’76 gathering, but history has pretty much forgotten Glenn’s contribution. It was Jordan, the first black congresswoman from the South elected to Congress, who stole the show with what is still regarded as one of the most powerful convention speeches ever delivered. Jordan was only 40 years old when she spoke, but never parlayed her bib moment into greater political glory. Instead, she left politics a few years later, although she would return to the spotlight 16 years later to deliver a second keynote address.

1980, Mo Udall: Udall was already a national figure when he took the stage at Madison Square Garden; he’d been one of Jimmy Carter’s principal liberal rivals in the 1976 primaries, falling inches short of a breakthrough victory in several contests. He was tapped for the ’80 keynote slot as a way of unifying a party that had been torn in half by Ted Kennedy’s primary campaign against Carter. Just before Udall spoke, Kennedy’s last-ditch effort at grabbing the nomination – a bid to change the rules and allow pledged delegates to act as free agents on the first ballot – fell short. A close Kennedy ally, Udall asked Democrats to come together to fight a Republican Party “dominated by the radical right, urging radical economics at home and belligerent policies abroad." This was the last time a keynote speech at the Democratic convention had more to do with promoting unity inside the hall than appealing to swing voters outside of it.

1984, Mario Cuomo: He might have been the first Democratic keynoter to claim the presidency, if only he’d run for it. Cuomo’s mesmerizing speech to the San Francisco convention that nominated Walter Mondale briefly lifted the spirits of a party that was headed for a lopsided November defeat and certified him as the dream candidate of liberals for the next two presidential elections. Early in the 1988 process, Cuomo passed on running. The next time around, he waited until the last minute, leaving a New Hampshire-bound plane idling on the tarmac of Albany’s airport just before Christmas 1991.

1988, Ann Richards: Richards took full advantage of the opportunity she was given in Atlanta, using folksy humor to belittle the GOP nominee, her fellow Texan George H.W. Bush. “Poor George,” she told delegates, “he can’t help himself: He was born with a silver foot in his mouth.” The speech turned Richards into something of a national liberal hero. She was the state treasurer of Texas when she delivered it, but two years later she won the governorship. In office, she racked up impressive popularity, but the Bush family got the last laugh, with George W. Bush riding a national anti-Democratic tide to a narrow victory over Richards in 1994 – even though her approval rating sat near 60 percent on Election Day.

1992, Barbara Jordan: Sixteen years after her first keynote address, Jordan was called upon to do it again at the convention that nominated Bill Clinton. This time, she spoke from a wheelchair, the result of a two-decade struggle with multiple sclerosis. But she sounded the same racially unifying themes. Given her health, the speech was not treated as a springboard back into elected politics (though there was some talk in 1993 that Gov. Ann Richards might offer Jordan an interim Senate appointment after Lloyd Bentsen left his seat to become Treasury secretary) and Jordan passed away four years later.

1996, Evan Bayh: Another safe speech. The son of a liberal icon, Bayh was finishing up his second term as Indiana’s governor when he keynoted the Chicago convention. He already had his eye on Dan Coats’ Senate seat, which would be up in 1998, and was universally acknowledged as a future White House contender. His speech ended up playing out a bit like his presidential ambition: It made sense on paper, but didn’t quite stir the excitement he’d been hoping for.

2000, Harold Ford: Ford was just 30 years old when Al Gore asked him to deliver the keynote address in Los Angeles. He’d essentially inherited his father’s House seat in a majority-black Memphis district in 1996, but Ford’s ambition extended far beyond the lower chamber; he was already thinking about running statewide, maybe even nationally. But Ford ended up being upstaged – the usual opening night keynote slot was instead given to Bill Clinton, with Ford inserted into Tuesday night’s lineup – and his address, while technically proficient, was safe and short on rousing themes (he praised Gore’s “different vision of the future”) and described as “low-key” in several write-ups. It didn’t hurt Ford’s career – he served three more terms in the House and nearly won a Senate race in Tennessee in 2006 – but it didn’t propel him to glory either.

2004, Barack Obama: You know the story. Months after a rival’s meltdown propelled him to the Democratic nomination for U.S. Senate in Illinois, Obama came to Boston as an unknown politician. When he left, he was on his way to becoming the only Democratic keynote speaker since at least 1832 to go on to claim the presidency:

2008, Mark Warner: This one falls into the forgettable category. In the early days of the ’08 cycle, Warner was a hot commodity, the centrist candidate who would (supposedly) give Hillary Clinton and John Edwards a run for their money.  But when Barack Obama suddenly took an interest in the race in mid-2006, Warner recognized that there was little room left for him and backed out. By ’08, he was well on his way to winning the retiring John Warner’s Virginia Senate seat. His keynote address wasn’t a dud, but it also didn’t leave delegates regretting the ways things had shaken out.