Bachmann cashes in on witch hunt 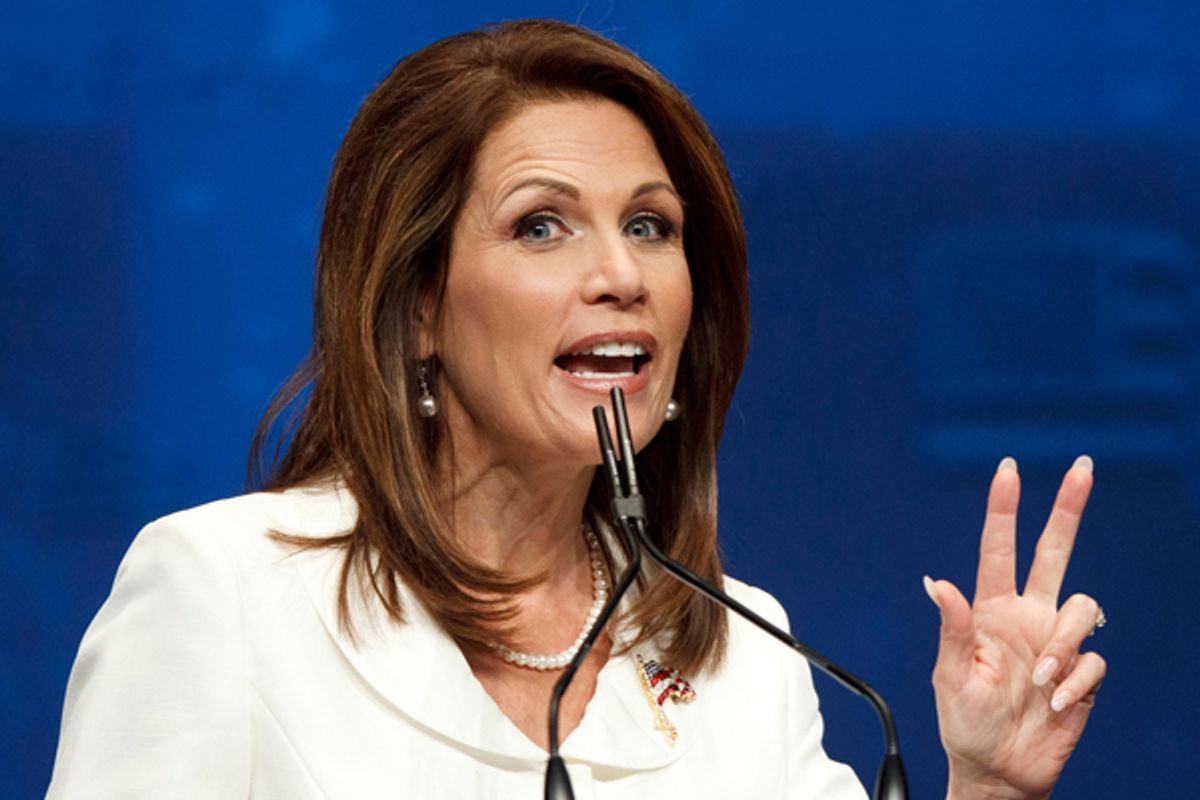 She may have been condemned by her own party leadership and lost any shred of credibility she had left with the mainstream media, but Rep. Michele Bachmann’s Muslim witch hunt accomplished it’s likely goal -- money. The controversial congresswoman announced on Twitter yesterday that she had raised $1 million from July 1 through 25 -- a massive haul. Bachmann has always been a prodigious fundraiser, but this is big even for her, considering that she raised $1.8 million in the three months between April and June.

While Bachmann doesn’t credit the witch hunt controversy for the cash, it clearly played a central roll, keeping her in the headlines over the past three weeks and making her a sympathetic victim of lame-stream media attacks in the grievance politics of the right. While GOP leaders like Sen. John McCain, Speaker John Boehner and Rep. Mike Rogers, the chairman of the House Intelligence Committee, abandoned her, her base never did. In fact, some Tea Party leaders rebelled against McCain and Boehner for speaking out against Bachmann.

The haul also explains why she can get away with stunts like the witch hunt and countless others -- she’s untouchable. In 2010 election cycle, she raised more than any other member of Congress, including soon-to-be Speaker Boehner or the members of the typically lucrative Ways and Means Committee (which oversees taxes) or appropriations. Bachmann said July's harvest came from more than 22,000 contributions with an average donation of just under $50, typical of the kind of grassroots base extending far beyond her district’s borders that she’s been able to assemble as a national Tea Party figure.

Fundraising largesse is currency in the complicated intra-party politics of Capitol Hill, important in winning plum committee assignments and leadership positions. And Bachmann has used her leadership PAC to spread the wealth around, redistributing the money she raises to her fellow GOP lawmakers. In January of 2011, Bachmann asked to be placed on the House Select Committee on Intelligence, which oversees the CIA and other intelligence agencies, and Boehner granted the request, despite her having zero foreign policy experience and having never served on a committee with international jurisdiction before. Some progressives have launched a campaign to get Bachmann kicked off the intelligence committee, and there’s indications that the GOP leadership would just as soon get rid of her, but they won’t -- she’s too valuable.

Rep. Richard Hanna, a freshman Republican from Ohio lamented his party’s catering to people like Bachmann in an interview with the Syracuse Post-Standard editorial board on Monday. Referring specifically to Bachmann’s witch hunt, he said, “I have to say that I’m frustrated by how much we -- I mean the Republican Party -- are willing to give deferential treatment to our extremes in this moment in history.”