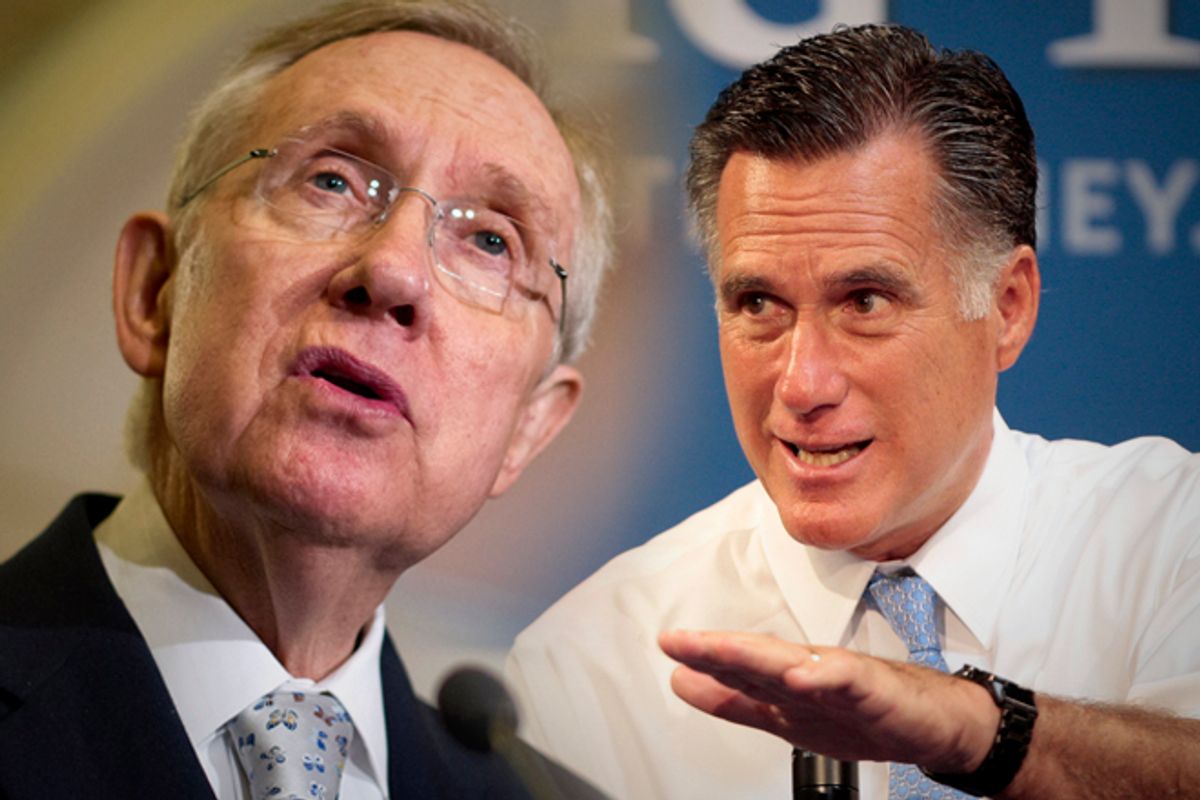 Senate Majority Leader Harry Reid lobbed a bombshell accusation against Mitt Romney in an interview with the Huffington Post Tuesday, claiming a former investor in Bain Capital told him that Romney paid nothing in taxes for 10 years, and that that's why the Republican presidential candidate is hiding his returns. Romney’s campaign said earlier this month that it’s “not true” that he paid nothing in taxes, and Reid offered zero evidence to support the claim, adding, “Do I know that that's true? Well, I'm not certain.”

Still, Romney has refused to release more than two years of returns, prompting Democrats to accuse Romney of hiding something nefarious. But is it even possible for someone of Romney’s wealth to pay nothing for 10 years?

Maybe, but probably not. David Miller, a tax attorney with Cadwalader, Wickersham & Taft LLP in New York, told Salon that knowing what we know about Romney's tax returns, it's "highly unlikely" that he paid nothing. It would be easier for someone like Steve Jobs to pay zero, as most of his wealth was in company stock, which isn't taxed until sold and may never be sold, as in Steve Jobs' case, Miller said. But Romney's arrangement with Bain is different. He would have earned management fees and when Bain sold the underlying companies that it invested in, Romney would have been subject to tax on his share. "It's possible he paid very little in taxes, but I find it hard to believe that he paid none," Miller said.

Joshua Kamerman, a lawyer and CPA in New York who is president of an eponymous firm, agreed. He told Salon that while it’s theoretically possible for Romney to have had zero tax liability for 10 years, Reid's claim is “preposterous." Charitable donations can shield up to only 50 percent of tax liability, while other means can lower the rate. But to pay nothing, Romney would have to sustain business operating losses, Kamerman said. The IRS lets people carry over losses for up to 20 years until they make a profit from which to deduct them. But Kamerman said this is almost certainly not the case for Romney, whom he said Reid is just trying to “embarrass." “It’s just as unlikely that Romney had no income at all for 10 years and thus didn’t file any returns,” he said.

Still, if Reid’s assertion is correct, Romney would hardly be the first wealthy person to avoid paying any taxes. This spring, the IRS released a report showing that about 21,000 Americans with incomes of over $200,000 a year paid no taxes in 2009, the most recent year for which data was available. That’s one in 189 high-income earners, or about a half of a percent. And while the financial crisis made 2009 an unusual year in which people likely had more losses to report, that rate ticked up only slightly (.02 percent) from previous years. “High-income returns are more often nontaxable as a result of a combination of reasons, none of which, by itself, would result in nontaxability,” the IRS report from May noted.

As the the New Republic’s Tim Noah explained in June, the way these people get out of paying taxes is mixed:

The biggest primary reason (11.5 percent) is charitable deductions. The Obama administration tried to limit those and got burned. It’s still worth doing. The next-biggest primary reason (10.7 percent) is deduction of medical and dental expenses. These should probably be limited at higher incomes. The next biggest (10.3 percent) is partnership and S Corporation net losses. S Corporations are a scam (made famous by John Edwards) to avoid paying payroll tax and should probably be eliminated altogether. (Congress has repeatedly tried and failed to close the payroll-tax loophole.) About one third of the filers eliminated their tax liability primarily through a combination of miscellaneous deductions, suggesting that all deductions should be limited or phased out at high incomes.

Responding to the IRS report, former Reagan economic adviser Bruce Bartlett noted that when the Treasury Department reported in 1969 that just 155 Americans with income over $200,000 paid zero income taxes, it caused such a national uproar that President Nixon rushed through a Johnson-era tax law to ensure that wealthy Americans paid something. Reagan later defended the law a decade and a half later.