The education debate rests on two faulty premises: that public schools are failures, and choice is the solution 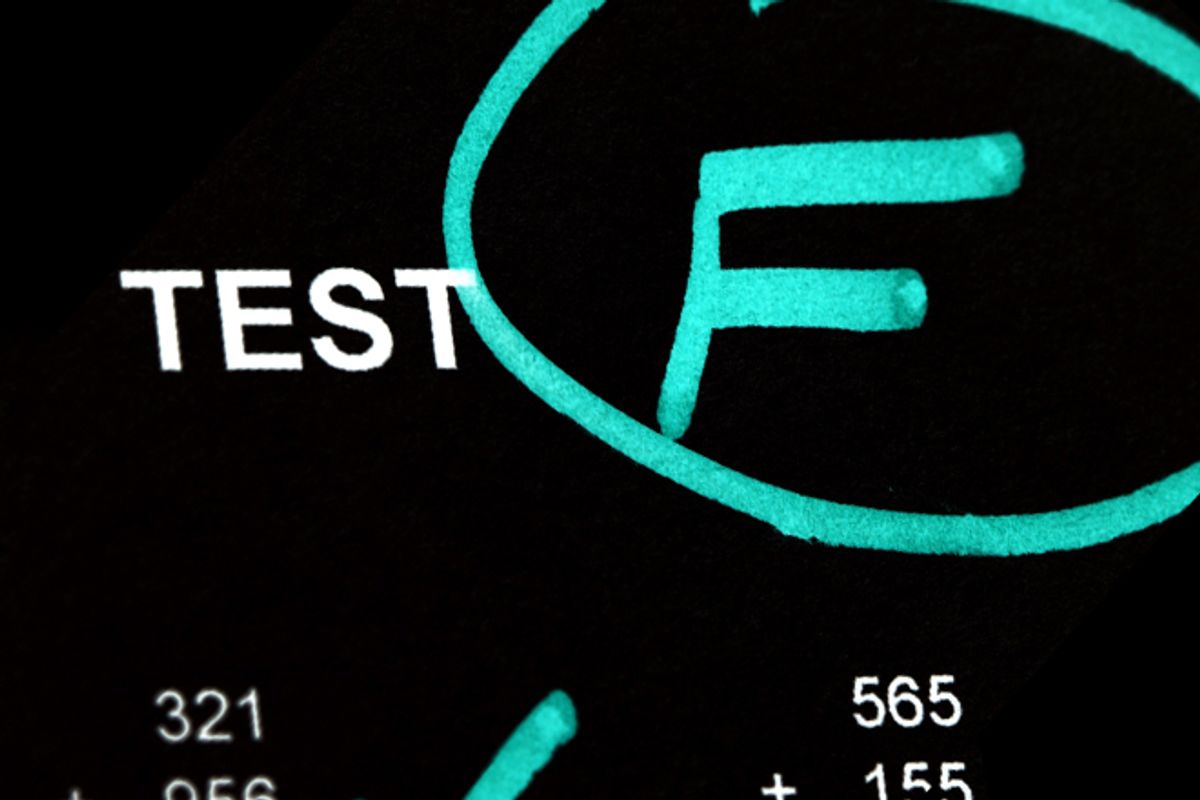 The “Overton Window” is not a new kind of low-glare, high-insulation windowpane. Nor is it the title of a paperback thriller like “The Eiger Sanction” or “The Bourne Supremacy.” Identified by Joseph P. Overton of the Mackinac Center for Public Policy, the Overton Window refers to the boundaries of the limited range of ideas and policies that are acceptable for consideration in politics at any one time. In other words, the Overton Window is the “box” that we are constantly exhorted to think outside of, only to be ignored or punished if we succeed.

The debate about K-12 educational reform in the U.S. is an example of the Overton Window at work. For a generation, almost all of the debate about improving American schools has been limited to minor variations on two themes. First, it is endlessly asserted, American public education is a miserable failure, compared to the educational systems of our major economic rivals in Asia and Europe. Second, the solution to this alleged failure is the privatization and marketization of public education.

Such is the power of the “framing” produced by Overton’s Window that these propositions command broad assent among thoughtful and well-informed Americans, even though the facts do not support them.

To begin with, the U.S. public school system is hardly the abysmal failure portrayed in the conventional wisdom. The international comparative data is skewed, by vocational tracking in Europe (all American high school students are sometimes compared to select Gymnasium and Lycee students in Germany and France) or geography (the entire U.S. is compared to the Shanghai metro area, rather than to all of China — the French educational system would look pretty bad, if it were compared in its entirety to Westchester County, New York).

Furthermore, non-Hispanic white Americans who are mostly the products of suburban public K-12 schools, are at the very top of global comparisons, as I pointed out in a recent Salon article:

The overall PISA scores of American students are lowered by the poor results for blacks and Latinos, who make up 35 percent of America’s K-12 student population. Asian-American students have an average score of 541, similar to those of Shanghai, Hong Kong, Japan and South Korea. The non-Hispanic white American student average of 525 is comparable to the averages of Canada (524), New Zealand (521), and Australia (515). In contrast, the average PISA readings score of Latino students is 446 and black students is 441.

Unlike Asian immigrants, many of whom are college-educated professionals, Latino immigrants tend to be less educated than the American average. And both Latinos and blacks are disproportionately poor. ... America’s public school system works quite well, for non-poor native students. It is overwhelmed by a disproportionately black poor population, which suffers the legacy of centuries of discrimination, and a disproportionately unskilled and illiterate foreign-born population.

If you look at the facts, then, they don’t suggest that the U.S. public K-12 system is a failure. Rather American public education is a world-class success except among poor natives and immigrants, whose educational challenges have more to do with poverty and rural cultural legacies than alleged failings of public K-12.

The challenge remains of how to improve the results for Americans of all races from disadvantaged backgrounds. And here all of the right, and much of the neoliberal center, thinks it knows the answer: choice! Americans should be given education vouchers to spend on schools of their choice, either within the public school system (charter schools) or outside, in a purely privatized system.

As the Smithsonian magazine observes:

In the United States, which has muddled along in the middle [of international comparisons] for the past decade, government officials have attempted to introduce marketplace competition into public schools. In recent years, a group of Wall Street financiers and philanthropists such as Bill Gates have put money behind private-sector ideas, such as vouchers, data-driven curriculum and charter schools, which have doubled in number in the past decade. President Obama, too, has apparently bet on competition. His Race to the Top initiative invites states to compete for federal dollars using tests and other methods to measure teachers….

Before we abandon our existing, mostly-successful system of public education for an untested theory cooked up by the libertarian ideologues at the University of Chicago Economics Department and the Cato Institute (who, as it happens, have been wrong about almost everything else in the last quarter century), shouldn’t we see if there is any evidence to support their claims?

If the theory that school excellence is the product of school choice, then the most successful school systems abroad should be ones based on Milton Friedman-style voucher systems.  Alas for the theory shared by Republican libertarians and Democratic neoliberals, the reverse is the case.

The consensus among students of comparative educational systems is that the leading K-12 systems are those of Finland and South Korea.

Today South Korea is often regarded, along with Finland, as one of the two premier K-12 education systems in the world — in no small part due to the spectacular academic performance of its students. According to a 2006 survey by the Programme for International Student Assessment (PISA), which evaluates the scholastic performance of 15-year-olds in 57 nations every three years, South Koreans rank first in reading, third in math (tied with Hong Kong), and 10th in science (tied with Liechtenstein). More than 97% of South Koreans graduate from high school, the highest graduation rate in the world. Finally, some 100,000 South Koreans now attend U.S. universities — third overall just behind China and India — despite having a population that is less than 1/20th of those nations.

How do the first-rate school systems in South Korea and Finland differ from the U.S. system (which is much better than generally believed)?

In both countries, roughly half or more of the funding comes from the central government—80 percent in South Korea, 45 percent in Finland. In contrast, U.S. public K-12 receives less than 10 percent of its funding from the federal government, with the bulk of K-12 funding divided about half and half among state governments and local school districts.

Also, throwing tax money at primary and secondary public education seems to work in those nations. South Korea spends nearly 8 percent of GDP on education, compared to the OECD average of 5.9 percent.

Finland spends more than average as well, between 6 and 7 percent of GDP.

Those countries also require much more educated teachers — and reward them with higher pay and cultural prestige.

You might think that the debate about educational reform in the U.S. would therefore be about how we can spend more money overall on public education; how the federal government can increase its share of public K-12 funding from 10 percent to 50 to 80 percent; and how to raise public school teacher educational credentials while substantially raising public school teacher salaries.

Instead, the American conversation about educational reform goes, in effect, like this: “In order to compete with countries like South Korea and Finland, we should completely ignore what they do in achieving superior education results, and indeed do the opposite. Instead of copying what works abroad, we should remodel our K-12 system along the lines suggested by libertarian theorists at the Cato Institute and the Heritage Foundation, even though no successful foreign country today or in the past has ever based its educational system on anything remotely resembling what those market utopians propose.”

In the last generation, conservatives managed to drag the Overton Window away from reality because attacks on U.S. public education as a total nationwide failure (rather than merely a failure in some high-poverty neighborhoods) served the interests of two right-wing constituencies: libertarians, who know, without examining any data, thanks to Friedrich von Hayek and Ayn Rand, that all public services can be done better by markets if privatized, and Southern Protestant fundamentalists who want their fellow to subsidize their anti-Darwinist separatist subcultural schools, by means of tax-funded vouchers.

Why has this eccentric right-wing perspective been accepted so uncritically by so many otherwise thoughtful centrist Democrats and moderate Republicans? Answer: It’s cheaper and easier to blame public schools for most or all social problems than it is to solve the problems of poverty, unemployment and broken families.

I have no agenda of my own to propose, and I don’t think foreign models can be transplanted without modification to the U.S. My point is simply that there is a very discernible Overton Window in the national conversation about educational reform, and because of that, discussion of most of the policies actually used by successful countries is taboo. Inasmuch as grants, media attention, etc. depend on staying within the narrow current frame of debate, education experts might endanger their livelihoods by waving their hands and pointing to what actually works elsewhere in the world.

So if you follow the American debate about K-12 educational reform, don’t expect to look through a frame to see either America or the world as they really are. Instead, if you look through the Overton Window all you will see is a faded, mimeographed Cato policy paper from 30 years ago on the hypothetical wonders of school choice, taped to a brick wall in a dead-end alley.