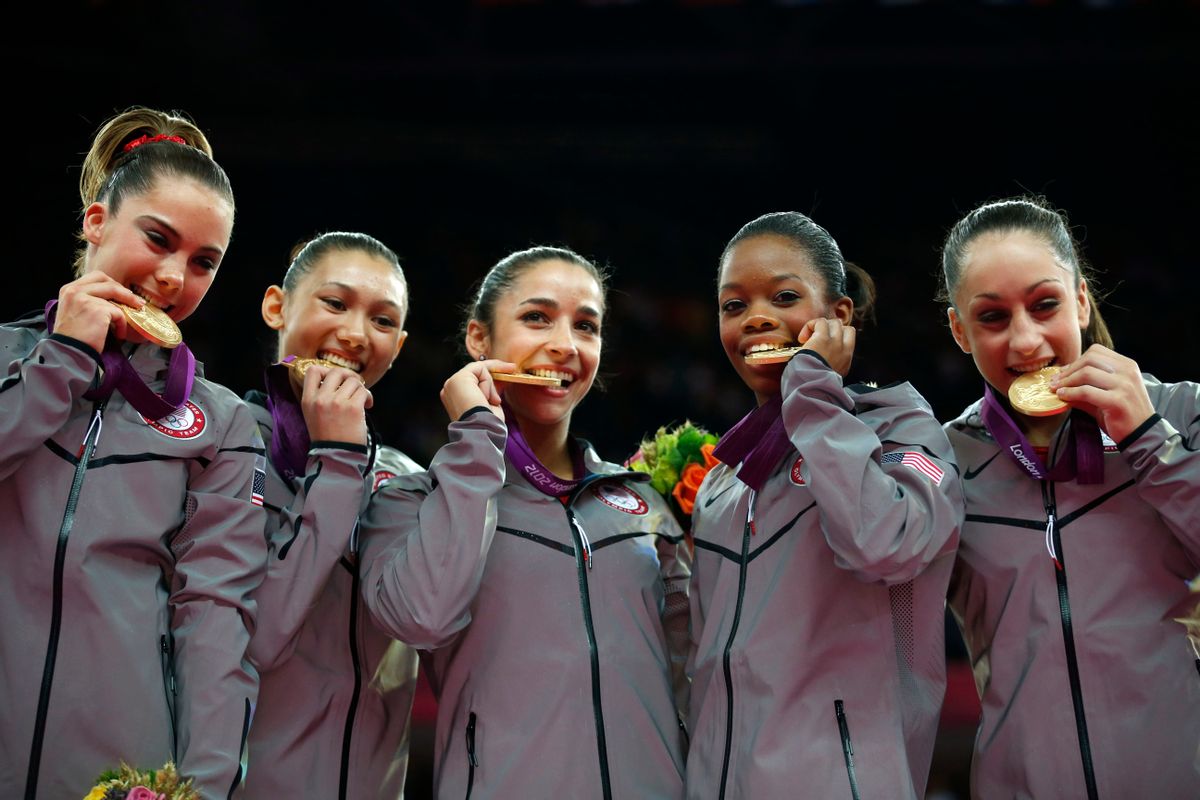 It was gold for the American women in the Artistic Gymnastics team final. (AP/Matt Dunham)
--

A few seconds before it was really over, Aly Raisman raised her arms and started to tear up. Having finished her last tumbling pass on the floor exercise without an error, Raisman knew that the U.S. women’s gymnastics team would win the gold in the team all around, the few remaining arm flourishes in her routine beside the point. Over on the sideline, Raisman’s teammate Jordyn Wieber broke into a huge, uncontained smile, one Raisman would echo in a few minutes. But before then, still on the floor, Raisman’s tears didn’t yet look like the ones of joy and happiness they soon would — they looked like tears of immense relief.

The proximity of elation and sadness, relief and disappointment is what makes the Olympics so rousing to watch. Over and over, the games come to down to teeny-tiny numbers, not just the split-seconds or tenths of a point that separate winners and losers, but the brief moment in time that separates athletes who have nailed their routine, entered the water cleanly, left all the hurdles standing, and those who have not. As the Russian gymnastics team demonstrated so completely on their floor routines, a tumbling pass can fall apart in an instant. When Raisman raised her arms, she knew she had survived the ghosts of all those possible errors.

All of the athletes at the games are under extraordinary pressure, but of all the Olympic sports, gymnastics is the best suited to passing that pressure on to us, the viewing audience, giving all who watch a minor-key version of the stress, nerves and— hopefully— joy and catharsis those pint-size gravity defiers also feel.

Why is that? Olympians are, to a one, freakishly talented and fiercely devoted. But swimmers swim and runners run, and though we can’t go nearly as fast (someone recently suggested that a normal person swim in the last lane, just to provide context), our much slower laps and jogs still look like the same sport these Olympians participate in. But gymnasts are tiny little girls who turn themselves into rockets, doing flips and turns and splits and tumbles we patently cannot do with what looks like extraordinary ease.

And while they are doing all these wondrous, graceful, difficult activities we get to really, really watch them. Gymnasts occupy the spotlight for much longer than almost all other athletes, and not just because their sport is so popular that they receive big screen time. They perform solo for whole minutes on the balance beam, uneven parallel bars and floor. (The extraordinarily acrobatic vault is over in the blink of an eye, more akin to diving, timing wise, than the other gymnastic events.) Swimmers and runners do their thing in a pack, weight lifters, discus throwers and high jumpers do their thing in a flash, but gymnasts are all alone for a long time doing the extraordinary, and just as compellingly, the ordinary.

We watch the flips and twists and wobbles on the beam, but also the emotions cascading off their faces. Last night we got to see Jordyn Wieber’s eyes focus so hard before the team’s first vault they seemed to be peering into her brain, to see vault specialist McKayla Maroney sticking her own gorgeous vault and coming up absolutely beaming, to see Gabby Douglas’ nerves before the balance beam, and to see Kyla Ross’ own tears of relief after finishing that same event. (There may be no crying in baseball, but there is most definitely crying in gymnastics.)

The juxtaposition of these human moments and nearly inhuman feats is what makes women’s gymnastics so gripping. Look at these girls, so intensely mature and yet so young, so monastically devoted to something and yet still lugging around their outsize backpacks. They’re competitors under inhuman amounts of stress, who deal with that stress by doing back-flips, but who are still so closely tied to their parents, they almost seem directly attached via some super-taut, twanging, emo-string. They are small, powerful machines that break down and cry. They are nothing like us, and yet in their undeniable teenage-ness they are like everyone, and in their ability to fly, capable of doing what everyone, in some fleeting moments, would like to do. The tug of war between all these feelings: anxiety, concern, overidentification, circus-watching, turns gymnastics into almost a participatory viewing event. From the couch, you can join the people on-screen in feeling untold anxiety and risking immense sadness for the promise of happiness.

Last night, there was very little disappointment. Jordyn Wieber, so brutally disappointed on Sunday night, got herself together and delivered. (And, look, I really like and feel for Jordyn Wieber, but NBC’s turning the entire event into a “redemption of Wieber” saga seems both shortsighted and lazy, like they were going to use all the footage and talking points they’d prepared before Sunday no matter what.) McKayla Maroney, the vaulting weapon, absolutely destroyed her one element, and the face she made after is my favorite of the games so far. Gabby Douglas flew on the uneven bars.

Watching the live stream earlier in the afternoon, which showed far more of the other teams than NBC did last night (it was nearly impossible to tell from the prime-time coverage who had won the bronze), the proceedings had a little more tension. Before the balance beam, the Russians and Americans were running neck and neck, which NBC pretty much glossed over come nighttime. By the final floor event it was clear just how much the Americans would have had to screw up to lose. (Aly Raisman even took out a tumble that was giving her trouble at the last minute, just to be safe.) But still, each of the Americans who went out, Wieber, Douglas, Raisman, did better and better and better, doing exactly what they had to in the most tense environment possible. When it was over, even though they knew they had won, they held hands and waited for the score board to confirm it. Raisman, still on the verge of tears, looked as though she believed it could get taken away from them. It couldn’t.