Did I "sell out" liberals?

Some of my fans are angry about my new radio show. But my goal is to break through the media echo chamber 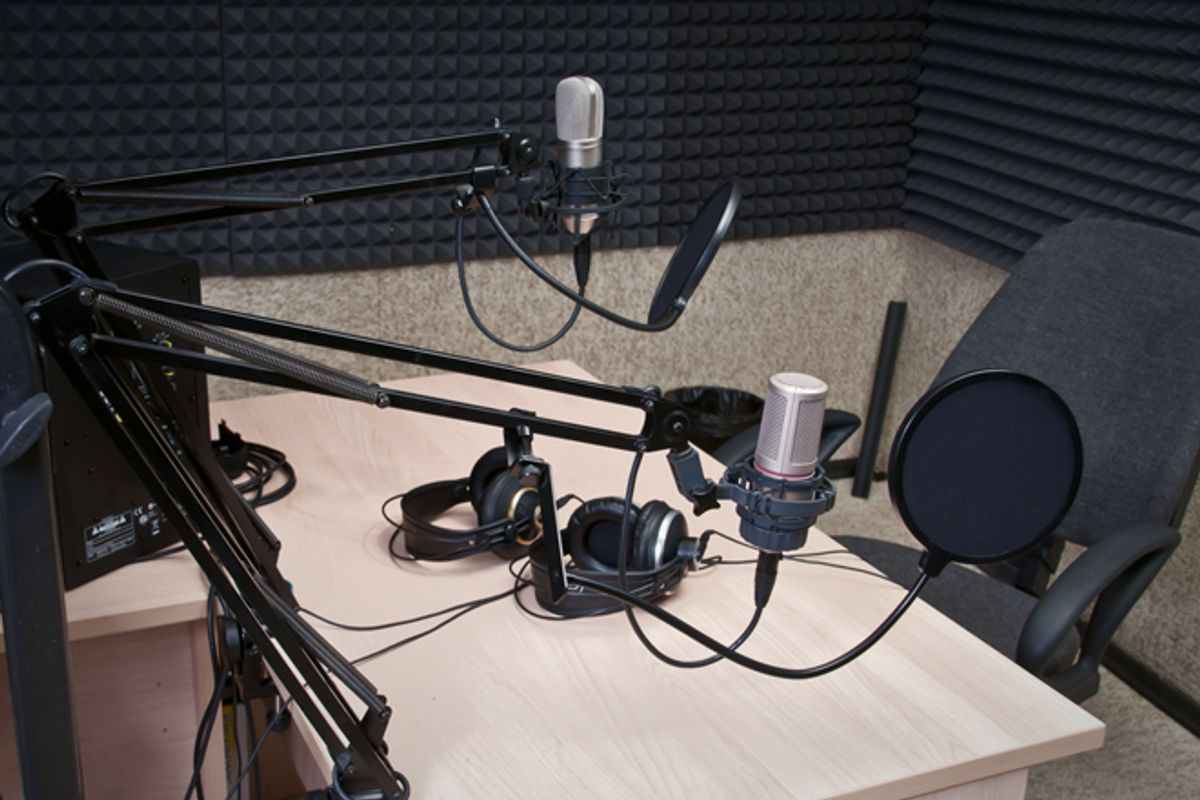 Turn on the radio, flick on the television, fire up a news website or flip open a newspaper (if you can still find one), and you are treated to what looks like a real-time melee. Booming screams of "socialism!" or "facism!" or "Bill Ayers!" or "offshore bank accounts!" pervade the radio dial, red-faced TV pundits scream at each other about the latest D.C. scandal, and the blogs and Op-Ed pages teem with hysterical and increasingly incoherent screeds. In the last few days, this sad reality has been underscored by the media coverage of the largest mass shooting in American history. Indeed, the horrifying atrocity in an Aurora movie theater has prompted media coverage revolving not around tempered soul searching or the nuanced issues leading to such disasters. Instead, it has ignited an offensively reductionist screamfest that pretends there are simple bumper sticker-ready answers to incredibly complex problems.

Put all of this noise together, and it's easy to conclude that the media world is as politically and ideologically polarized as the country it purports to reflect.

But listen, look and read more closely, and you slowly realize the mediasphere is not polarized at all -- it's more unified than ever before. In almost every medium, the consensus message is one telling Americans to ignore their local communities and to think exclusively in Republican-versus-Democrat terms about everything. This two-pronged message is so homogenous and so constantly repeated across so many American news outlets that it likely makes foreign totalitarians and their state media apparatchiks jealous.

In visual terms, the predictable result of this has been an audience transformed into the bored, annoyed and deflated people in this brilliant commercial -- only it's not the "special interests" who are pulverizing us with the same vapid red-versus-blue messages over and over again, it's the media itself.

Utterly disgusted and frustrated with this reality, last month I made the decision to leave my morning radio show on Colorado's progressive talk station, Clear Channel's AM760, and accept Clear Channel's offer to launch a new weekday afternoon radio program -- one whose goal is to do something wholly different. Launched in July and called "The Rundown With Sirota and Brown," the program is co-hosted by myself and President Bush's former Undersecretary of Homeland Security, Michael Brown. He is a guy whom I don't agree with much, but who comes to conversations with principle and integrity. As evidenced by our joint refusal to demagogue our extended local coverage of the Aurora massacre last week, we both come to the microphone with a desire to dial down the rhetorical volume and engage in an honest dialogue about the toughest issues of the day.

Just as important as the program's transpartisan complexion is where on the radio dial it will air. Rather than being on a station branded to one ideology or the other, it will air weekdays from 3 p.m. to 7 p.m. MT on Talk Radio 630 KHOW. It is a station that mixes together all sorts of different voices, from consumer watchdog Tom Martino to Glenn Beck. In other words, to reach as broad an audience as possible, the show will air on a station that has carefully avoided branding itself to any specific political ideology (you can listen, Colorado, on AM630 on your radio or from anywhere online at www.sirotabrown.com or on the iHeartRadio app).

Since Clear Channel made the announcement about the new show, I've been hit with a wave of feedback. Because the content of my AM760 show was broader than just politics and more non-partisan than most progressive-themed shows, much of the self-selecting audience it attracted has been very supportive of the move. However, some liberals are enraged. They insist that after three years of hosting a successful program on my own, I am "selling out" the progressive cause. Some conspiracy theorists have even claimed that conservatives within the Clear Channel company saw the big ratings success of my show in a political swing state, and decided I had to be moved, so as to not aid the Obama campaign (these people apparently haven't listened much to my show, which is hardly a water carrier for a particular party).

No doubt, this backlash perfectly reflects that larger success of the media machine's propaganda -- the kind that teaches news consumers to see the world in us-versus-them, summer camp color-war terms. In such a paradigm, moving to a format that speaks to a broader audience or -- gasp! -- reaching out to listeners who don't 100 percent agree with you is viewed by partisans as a sign of traitorous betrayal.

I see it the other way around. My obligation as a radio host and journalist is not to tell people only what they want to hear, nor to hew to some manufactured ideological line. It is to present as many facts to listeners as possible -- regardless of whether those facts offend a news consumer's preferred political party or politician. It is to engage with people who don't agree with me, not just confirm people's preconceived beliefs. To be effective, that means doing whatever I can to reach as wide an audience as possible -- and that's a particularly imminent imperative considering how many Americans are now fleeing the red-versus-blue news media model.

The numbers are stark. Progressive-branded talk radio has continued to lag in the Arbitron ratings, and now conservative-branded talk radio is struggling. Meanwhile, in the the cable TV world -- arguably even more Republican-versus-Democrat than talk radio -- the New York Times recently reported that partisan cable outlets Fox News and MSNBC are seeing a massive decline in ratings as more and more Americans are simply tuning out.

Which news media outlets are doing well in this environment? Three examples tell the bigger story. In radio, NPR continues to rake in big numbers in many major markets and non-political podcasts are now the rage. In television, MSNBC's "Up With Chris Hayes" has been one of the few ratings bright spots, with the Times noting that his program has seen a 15 percent rise in total viewers and has been "No. 1 on average in its Sunday time slot on cable news channels among viewers ages 18 to 34." Not coincidentally, all three of these examples specialize in non-ideological content that goes way beyond the narrow Washington-focused scope of most other Republicans-versus-Democrat programs. They prove Michael Harrison of Talkers Magazine's theory that "there's a great vacuum out there for non-partisan objective political commentary."

For liberals, that's an especially important truth because it undergirds a key miscalculation of the entire "progressive media" construct in recent years.

Recall that in their much-ballyhooed backlash to conservative media during the Bush era, Democratic partisan activists and their wealthy benefactors assumed independent and left-leaning news consumers would respond to a liberal version of right-wing media. Investing in endeavors like Air America and other media outlets, their theory was that if they just created their own Fox News and their own set of Rush Limbaughs with liberal talking points, liberal listeners would come in droves and then vote for Democratic politicians.

As we all know, it hasn't worked out that way -- and it hasn't precisely because when it comes to news consumption, the independent and liberal-leaning audience is quite different than their conservative counterpart. As a 2007 Zogby/Lear Center Poll found, when compared with conservatives, liberals and independents are far less interested in being preached to and far more interested in being exposed to views that both confirm and challenge their assumptions. Give that audience the opposite of balance -- brand the content with Democratic partisanship and scream vitriolic talking points at them -- and they'll head for places like NPR, "Up With Chris Hayes," or other such ideology-challenging venues. Which, of course, is exactly what is happening.

When I first had the opportunity to work in radio, I was nervous about getting into the business precisely because of the partisan nature of so much of talk radio. Eventually, I took the job on the same two conditions that I took the writing job with Salon.com: 1) that the higher-ups would never try to censor my views and 2) that I could try to program my show beyond this red-versus-blue model. Thankfully, (just like at Salon) Clear Channel has upheld that commitment and been completely supportive of my work.

During my time hosting the AM760 morning show, I was criticized by some Democratic partisans for not being loyal enough to Democratic politicians, and not focusing exclusively on Washington politics. But as the show's ratings and the station as a whole grew and eventually led the station, we began building something different -- something with a local focus and with journalism, fact-finding and, yes, entertainment, at its core. It was a big success that I make no apologies about -- and that I aim to continue with "The Rundown."

That's not a betrayal or taking the easy path, as the political tribalists claim -- if anything, it's the opposite. It's meeting listeners where they are, not where hardcore partisans want them to be. Doing otherwise as so many partisan media outlets and obstinate hosts still do only contributes to the red-versus-blue propaganda that's both harming America and driving so much of the audience away for good.