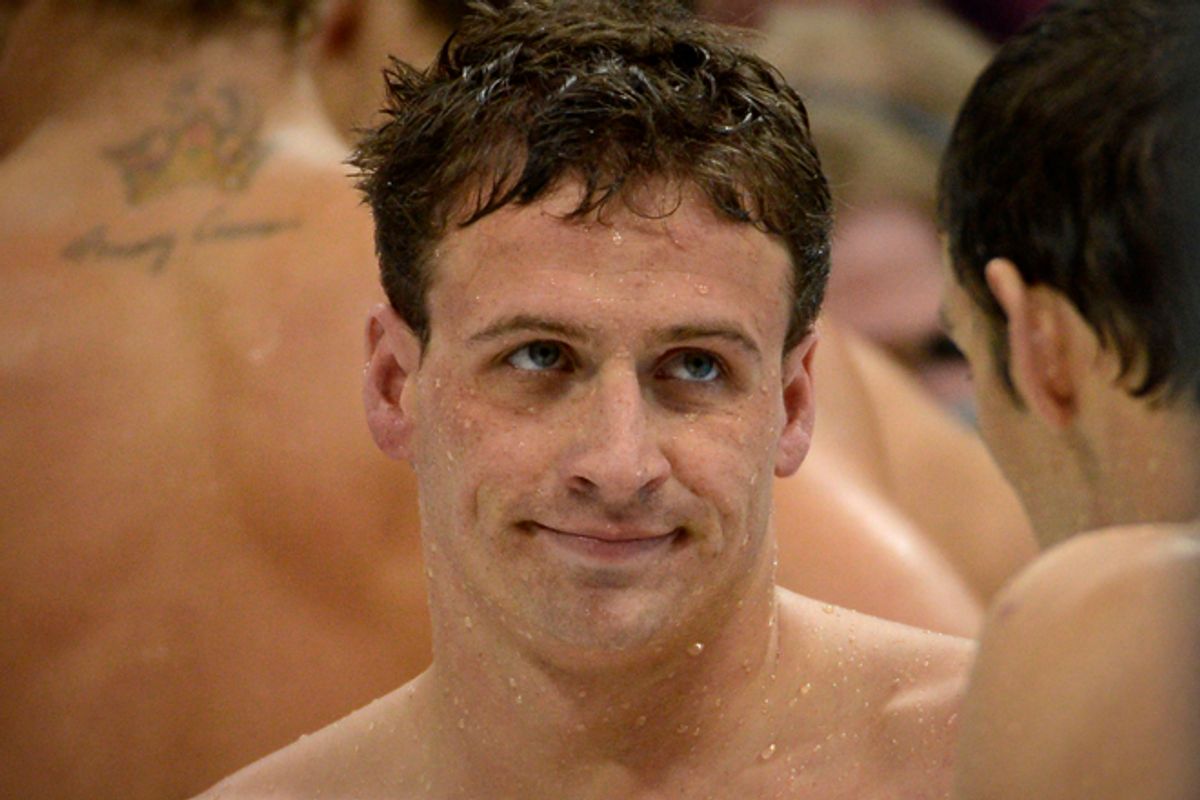 In a move that's already become one of the highlights of the these fabulously mom-centric games, Ileana "Ike" Lochte, mother of multiple Olympic medal winner and owner of the world's most ridiculous six-pack Ryan Lochte, opened up her mouth on "Today" and said out loud that her son "goes out on one-night stands. He's not able to give fully to a relationship because he's always on the go."

This raises a lot of questions. Let's start with a show of hands: Who else's mom knows how much tail you're getting? Who else is having conversations with the woman who gave birth to you that may involve the words "hooking up" and "booty call"? Because, WHAT? My mother still doesn't even know I ever lost my V-card, and I've got two kids and HPV.

Other question: Is this Mrs. Lochte's subtle way of discouraging some distracting, would-be girlfriends from her golden boy, or is this actually a wingman move? Either way, again I say, what? In an interview with Us, she elaborated on her son's girlfriend-free status thusly, "He's too busy! He's so warmhearted that I don't think he'd want to have a relationship with somebody. I don't think he wants to get into a relationship. It just wouldn't be fair to the girl. He doesn't have the time." Sounds like a "Don't even bother" until you remember that, as any single woman knows, "I don't have time for a relationship because it wouldn't be fair to you, baby" is code for, "Go ahead and throw yourself at me and become completely obsessed and read way too much into my texts and cry a lot while I abstain from all emotional responsibility, ladies." All I'm saying is, I'm on to you, Ryan Lochte and Ryan Lochte's mom.

Ike Lochte actually seems like an incredibly cool, supportive lady. As a woman who came to Miami from Cuba as a little girl, she recently said of her son's 2008 Olympic victory, "All I could think about was what my parents went through, and how he's there representing the United States. My parents wanted us to be there so badly … To see him up there with the America flag was great." Before his swims, she tells him, "Have fun, and I love you." That's all lovely. I'm just not sure the rest of the world is really into how involved she seems to be in his promiscuity.

Being able to be candid and non-judgmental with one's children about sexual issues is great. Look at the inspiring example of Susie and Aretha Bright. But there's also a boundary of privacy that exists for a reason. And the reason is so that you don't have to ever, ever envision a family member going at it. That's why no less an expert than Dr. Ruth took to Twitter Thursday to muse, "Seems to me your mom shouldn't be discussing your sex life on nat'l TV. Mom as wingman? Really? Doesn't she want him to find a girlfriend? In Jewish tradition making a match is a mitzvah, a blessing. Mom being wingman for 1 nite stands, not so much." She also added, "Hopefully Mr. Lochte, who wears rubber cap while swimming, wears a rubber somewhere else during all these 1 nite stands," because Dr. Ruth is the cutest.

But perhaps Mama Lochte isn't gleaning her inside knowledge of her son's bedroom antics while they're bonding over some Capri Suns. Maybe the person in the family most likely to brag about Ryan Lochte's sex life is Ryan Lochte. In an interview with ESPN last month, Lochte estimated that "70 percent to 75 percent of Olympians" are currently getting it on. Why wouldn't they be? Jesus, have you seen these people? For them to be receiving the maximum amount of play possible sounds just about exactly right.

That's why guys like Danell Leyva seem to be pretty proficient in the ancient art of "You show me yours and I'll show you mine" sexy texting. As Lochte explained to ESPN, "Hey, sometimes you gotta do what you gotta do.... My last Olympics, I had a girlfriend -- big mistake. Now I'm single, so London should be really good. I'm excited." Yo, Ryan, that's what your mom said.