They grant Bono humility and MC Hammer wisdom. Patti Smith and Neil Young use them. So why do rock purists scoff? 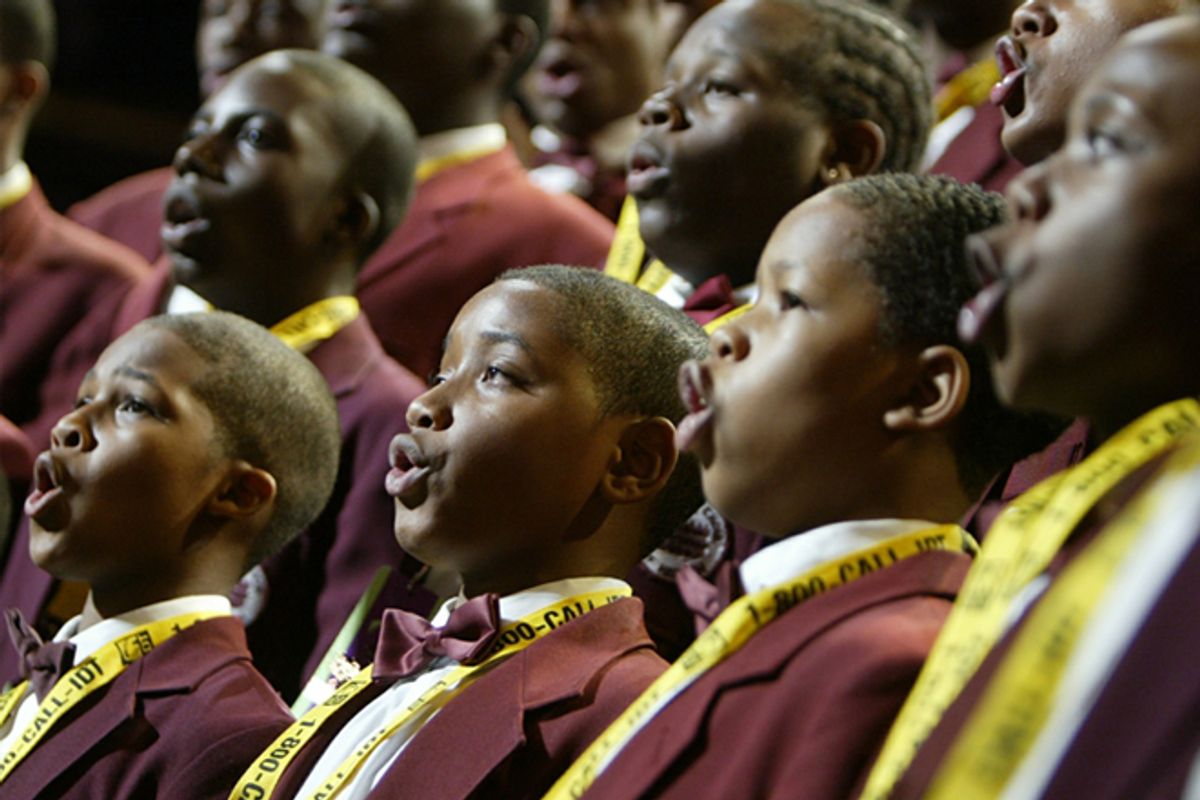 In the thoroughly ridiculous music video for 2010’s “Radioactive,” Kings of Leon is caught in the act of flagrantly flogging one of the hoariest clichés in all of pop music. The clip captures the fashion model-handsome arena-rock band in the full bloom of clueless pomposity, as it shrugs off the messianic glow of stardom and returns to its down-home, Southern roots. And how is this revival of pre-celebrity sanctity signified? By a children’s choir, which Kings of Leon embraces like Jesus reuniting with his flock.

“From what I have read, hiring a children's choir to join your band makes your music sound 'more meaningful,'” blogger Carles dryly observed on the indie-skewering website Hipster Runoff upon seeing “Radioactive.” “It inspires some sort of euphoric, spiritual vibe, helping u to reconnect with nostalgic images of youth, or something.”

Of all the cheap tricks in the pop-music arsenal, it doesn’t get much cornier than trotting out a kiddie choir. The practice has a not quite illustrious but undeniably effective history of giving songs a dose of adorably red-cheeked gravitas. In the ’70s, Alice Cooper assembled a group of lil ruffians to lend youthful authenticity to his vaguely evil (or perhaps merely vaudevillian) summer vacation ode “School’s Out.” In the ’80s, children dressed in choirboy robes were trotted out in the video for Pat Benatar’s “We Belong,” a passionate love song that (thankfully) has nothing to do with passionately loving kids. In the ’90s, Jay-Z scored a pop hit with “Hard Knock Life,” which relied on a sample from the definitive children’s musical, "Annie," to make his street-wise hustler persona as threatening to Middle America as precious orphans suffering from systemic child abuse.

And, in spite of Kings of Leon’s embarrassing kiddie-choir mishap from a few years ago, artists are still dusting off this somewhat shameful pop-music staple today. In fact, two cut-in-concrete monuments to rock 'n' roll respectability, Neil Young and Patti Smith, employ groups of mewling youngters on their new albums. Smith’s “reconnect with nostalgic images of youth, or something” moment occurs on a cover of Young’s own “After The Gold Rush,” the last song on the recent "Banga," and the contrast between Smith’s wizened howl and the clattering children actually sort of works. On Young’s "Americana," a collection of electrified folk songs like “Clementine” and “Jesus Chariot (She’ll Be Comin’ ’Round the Mountain)” that little ones are still taught in nursery school, the venerable singer-songwriter is accompanied by a bunch of real live squeaky tots throughout the album. The combination of voices doesn’t exactly recall the smoothness of Young’s collaborations with Crosby, Stills and Nash, but at least these backing singers are better behaved.

Children’s choirs are typically utilized by adult pop stars in one of two ways. The first is tried, true and predictable; the other not so much. (More on the latter in a bit.) The obvious way kiddie singers are used in pop songs is to telegraph a straightforward expression of innocence. This is the preferred method of upstanding individuals like R. Kelly (who was joined by kids on  2000’s “I Wish”) and the late Michael Jackson, who demanded to be backed by a children’s choir (evenly distributed among white, black, Asian and mixed-race kids) for the farewell concerts that he never got to perform at London’s O2 Arena in 2009.

As a culture, we commonly look at children as symbols of renewal. They represent unpolluted purity, a version of ourselves not yet corrupted by the truths and lies of adulthood and unfettered by failed dreams and broken promises. Musically, grouping children together and having them sing conveys a utopian vision of social and political consensus, and points toward boundless possibilities for a bright future. This idea is crystallized in the power ballad “When the Children Cry” by late ’80s pop-metal band White Lion, which describes a society so degraded by violence and crooked politicians that it must be reborn as “one united world, under god,” where all governments are abolished to make way for a new oligarchy ruled (presumably) by kids. (If you don’t know the song, imagine a poodle-haired, post-apocalyptic redux of Whitney Houston’s “The Greatest Love of All,” but with a socialist twist.) How will we know when this super-race of savior-spawn has emerged to save us from ourselves? According to White Lion singer Mike Tramp, all we’ll need to do is listen, “’cause when the children sing / then the new world begins." (It should be noted that “When the Children Cry” does not feature any actual children crying and/or singing.)

The obvious method of kiddie-choir usage has at least one significant flaw: Children, like bumper stickers, tend to be less cute when they belong to somebody else. The sound of your own kid singing doubtlessly fills a parent with pride, but listening to a chorus of children you don’t know can be surprisingly depressing.

Before there were children’s choirs in pop songs, there were grown-up choirs. Pop has long had strong and visible roots in gospel music. Like Ray Charles, Sam Cooke, Aretha Franklin, Donna Summer and Whitney Houston before them, many of today’s most successful pop stars honed their talents in the church. Had Beyonce not ground out endless choir rehearsals as a young featured soloist at St. John’s United Methodist Church in Houston, she might never have grinded up on the pony for our collective amusement.

When a gospel choir arrives on the scene of a pop song, you know you’re in for something “real” and “authentic.” While gospel choirs ostensibly bring an infusion of spiritual uplift to a song, they also make it seem more down-to-earth and communal. They lift the melody to the heavens while also keeping it grounded. In this way, gospel choirs are a kind of humanizing agent for pop stars. They have granted Bono humility, MC Hammer wisdom, and Mike and the Mechanics profundity. They have made Foreigner's "I Want To Know What Love Is" sound less synthetic, and Poison’s first post-grunge single “Stand” earthier. A gospel choir even helped Madonna get fired by Pepsi. It’s not water-into-wine stuff, but it’s in the same ballpark.

The difference between God and a gospel choir is that God would never agree to sing on pap like Marc Cohn’s “Walking in Memphis.” God makes himself scarce, so He endures; gospel choirs, on the other hand, never go out of style among unimaginative schlockmeisters, and therefore will always seem a little played out.

If the all-encompassing thrust and harmonic perfection of gospel choirs are ideal for expressing the presence of an unseen but deeply felt power that’s far greater than ourselves, the untrained unpredictability of children’s choirs conjures primal human emotions at their least diluted. This can mean the kind of sweet, bountiful joy that’s only possible before the onset of grown-up cynicism, or the sort of stark raving fear felt by those inexperienced in managing life’s many obstacles. You can hear both on "Innocence & Despair," a 2001 compilation of recordings made by Canadian schoolchildren in the mid-’70s and released by the Hoboken, N.J., indie label Bar/None.

The album is credited to the Langley Schools Music Project, composed of students from four elementary schools in Langley, British Columbia, under the direction of music teacher Hans Fenger. Many of the songs on "Innocence & Despair" are upbeat favorites of ’60s and ’70s pop like Bay City Rollers’ “Saturday Night” and Neil Diamond’s “Sweet Caroline,” but the gloomy title is no lie: The echoing, yelping renditions of this feel-good music gives off a powerfully aching melancholy. It's the sound of youth, frozen on tape, as it fades inexorably away. As for the ballads, which include mawkish classic-rock standards like the Eagles’ “Desperado” and the Beatles’ “The Long and Winding Road,” they are unexpectedly gut-wrenching. What was a love-’em-and-leave-’em lament about a ramblin’ cowboy stud when Don Henley sang “Desperado” becomes, in young Sheila Berman’s affectingly off-key version from "Innocence & Despair," a song about the alienation of late adolescence, when you’re caught between a disappearing childhood and an unknowable adulthood.

As hard as kiddie choirs are to resist for pop singers and listeners alike, "Innocence & Despair" is a reminder that children’s choirs can be painful to listen to in a musical sense (when they can’t carry a tune) and also emotionally, because they represent a moment not even a pop song can preserve forever. For all the hope and happiness we take from kids, there’s also the knowledge that these feelings are fleeting, for them and for us.

For a while, "Innocence & Despair" was an influence du jour for indie artists. It inspired Karen O of the Yeah Yeah Yeahs when she composed the score for Spike Jonze’s 2009 film "Where the Wild Things Are," which marked the pinnacle of a similarly childish movement in ’00s filmmaking. (See also: Anderson, Wes; and July, Miranda.) It also guided Ryan Gosling’s musical side project Dead Man’s Bones, whose self-titled 2009 debut was recorded with the Silverlake Conservatory Children’s Choir. The feral quality of the Langley kids’ singing was echoed less obviously in the music of Animal Collective — the ultimate underground paragon of aughties pop-friendly weirdness, whose campfire-choral vocals openly aspire to the free-form harmonies of children — as well as the hyperactive drill-team dance-punk of the Go! Team.

Which brings us to the second method of kiddie-choir deployment, where the spontaneous squeals of youth are emphasized and exploited, rather than blasted away by ProTools. Think of the glowering students striking back against “teacher” in Pink Floyd’s “Another Brick in the Wall (Part 2)” or the tykes cheerily chanting “hang the DJ” in the Smiths’ “Panic.” (British schoolchildren suddenly morphed into the Children of the Corn in ’80s English rock songs.) Here the innocence of children is still foregrounded, only it’s curdled because it’s been subverted in some way. The intention is often ironic, like on Faith No More’s “Be Aggressive,” where kids chant the infectious chorus as the verses detail the pleasures of gay oral sex. It’s like that favorite game of older brothers everywhere, where you whisper a bad word in a little kid’s ear and wait for him to repeat it. But behind the laughter is the sad realization that nothing can be protected forever.

It’s fitting that Neil Young opted to be backed by a children’s choir on the same album on which he finally reunited with the full lineup of his wild and undisciplined backing band, Crazy Horse, for the first time in 16 years. The unstudied primitivism of both groups is fun and real and a little elusive. Young has called the songs on "Americana" representative of “an America that may no longer exist." Who better to express our collective loss of innocence than those in the process of losing their own?