The end of ethanol? 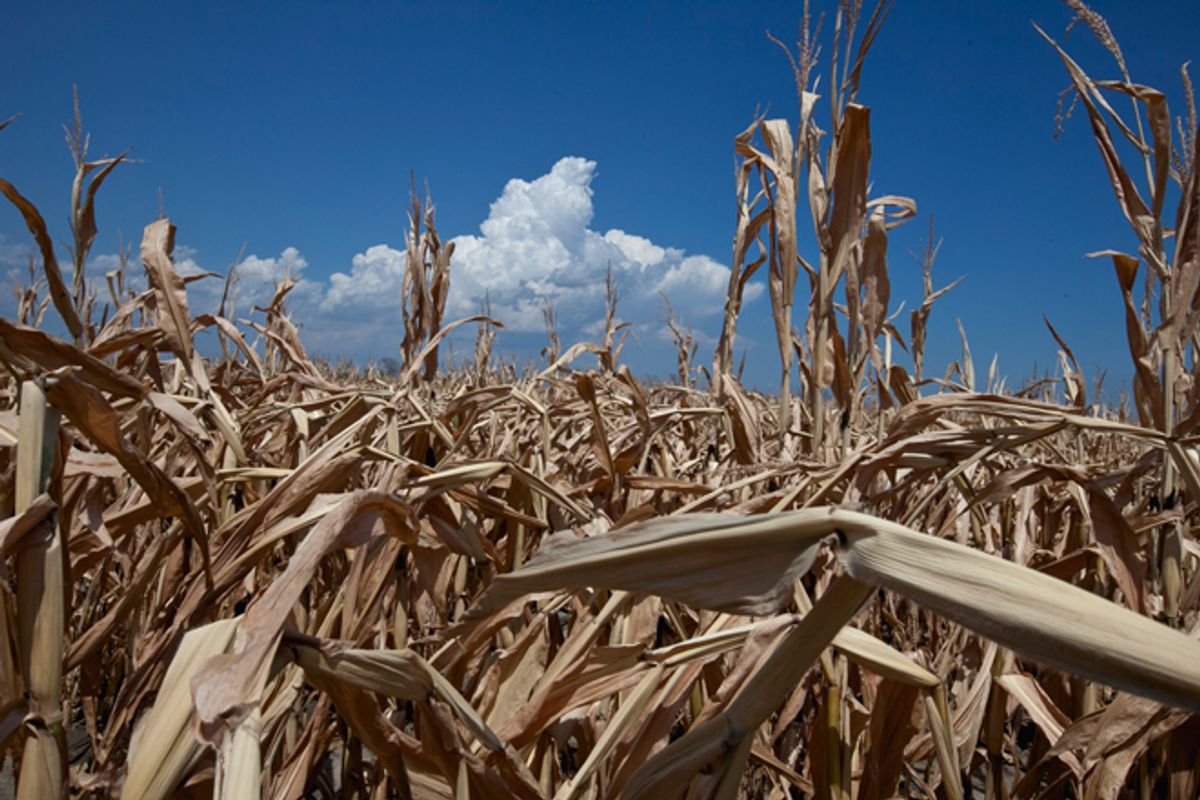 Americans excel at processing government-subsidized corn into products — cheap beef, cheap chicken, cheap sugar. We’ve also gotten very good at turning corn into relatively expensive bio-based fuel. In 2010, corn processors turned 10 times as much American-grown corn into ethanol as into high-fructose corn syrup. That same year, for the first time, our addiction to fuel outstripped our addiction to hamburgers — more corn went into ethanol than into feed for livestock.

For years, national politicians could only benefit by supporting ethanol. Oil companies weren't too worried about it. Farmers loved it, and they lived in swing states. Even as think tankers, scientists and some environmentalists tallied reasonable objections to turning millions of acres of corn into fuel, the Iowa ethanol pander became a rite of passage for presidential candidates. But now, with this summer’s drought killing off America’s most valuable crop, the ethanol industry is finally facing critics with actual political clout — meat producers, auto companies and the average American family. One bad crop of summer corn won’t dismantle the business ethanol producers have built. But it could herald the decline of an industry that’s been propped up for years by political convenience rather than economic or environmental sense.

I first heard the rumblings against ethanol from a dairy farmer in upstate New York a few weeks back: The economics of running a dairy farm were dire enough, he said, without ethanol producers driving up the price of ever-scarcer corn. By the beginning of this week, worries and dissatisfactions like his had coalesced into an official letter of complaint from turkey growers, pork producers, dairy farmers and cattlemen to the Environmental Protection Agency. These producers would rather not compete with the ethanol industry to buy grain, and their coalition made a simple enough request of the Environmental Protection Agency: Just for the moment, stop giving the ethanol industry a boost.

Because of the political benefits of supporting corn-based ethanol, the biofuel gets more support from the government than any other kind of clean energy. When a group of think tanks analyzed government investment in clean tech from 2009 to 2014, they found that tax credits and incentives for creating and burning biofuels together added up to “the single largest contribution to federal clean energy deployment expenditures.” Recently, though, support for those incentives has eroded. Subsidies for corn-based ethanol ended in 2011. The industry still benefits, though, from a standard that requires a minimum volume of biofuel powers the country’s vehicles. It’s an important market-driver for the ethanol industry, and it’s what meat producers are asking the Environmental Protection Agency to temporarily suspend.

The meat industry isn’t alone in its skepticism of the renewable fuel standard: The auto industry is also less than fond. The standards require purveyors of fuel to gradually ramp up the amount of biofuel they use until 2014, when 14.4 billion gallons of biofuel will go into American’s trucks, planes and automobiles. In practice, that means that anyone who has a car will be buying into the clean energy revolution: All gas available at the pump will be blended with ethanol, in increasingly higher percentages. To meet this goal, the ethanol industry has pushed for gas stations to sell E15, a blend that contains 15 percent ethanol. American auto companies have been arguing for years that gas with that much ethanol blended in will screw up their cars, making the engine, fuel storage and emissions systems less durable. Right now, the auto industry has been losing this argument: In Lawrence, Kan., the first E15 pump in the country opened up in mid-July.

Cars and meat — is there a more American coalition? Add to that a third ally -- the grocery shoppers of America, the moms and dads who just want to buy their kids milk and chicken fingers -- and ethanol might have the beginnings of a problem.

For years, America’s ethanol push has been driving up food prices, just not in American grocery stores. And while a worldwide food crisis sounds like a problem, American politics have never been particularly responsive to hunger in Africa or the Middle East. This corn-killing drought, though, could affect food prices here in America. Across the world, spikes like this one have encouraged political unrest. The Obama administration won’t fall because of $7 boxes of cereal, but rising food prices certainly could create a broader base of voters who’d rather put corn-based products in their mouths than in their gas tanks.

If the political logic for ethanol falls apart, there’s little left to recommend it. Renewable resources aren't necessarily infinite, and biofuels extract a high cost in land and in water. The World Policy Institute has calculated, for instance, that it takes 32 gallons of water to produce enough oil to drive from New York to D.C. and back again. The production of enough corn-based biofuel to fuel the same drive requires more than 35,000 gallons of water, according to the Institute.

Even renewable energy advocates and experts don’t necessarily see the widespread use of biofuels as a key component to reducing carbon emissions. In his book "Reinventing Fire," the Rocky Mountain Institute’s Amory Lovins argues that biofuels make the most sense for trucks and planes — modes of transportation that can’t be easily electrified. These biofuels need not come from corn but from plants that people don’t eat — switchgrasses, sorghums and trees like poplars and willows. Conveniently, some of these crops have a greater chance of thriving in a changed climate, in which droughts like the one killing the corn this summer become ever more frequent.