Will your memory of the dazzling 1990 Schwarzenegger flick be erased by this dark, muscular Colin Farrell remake? 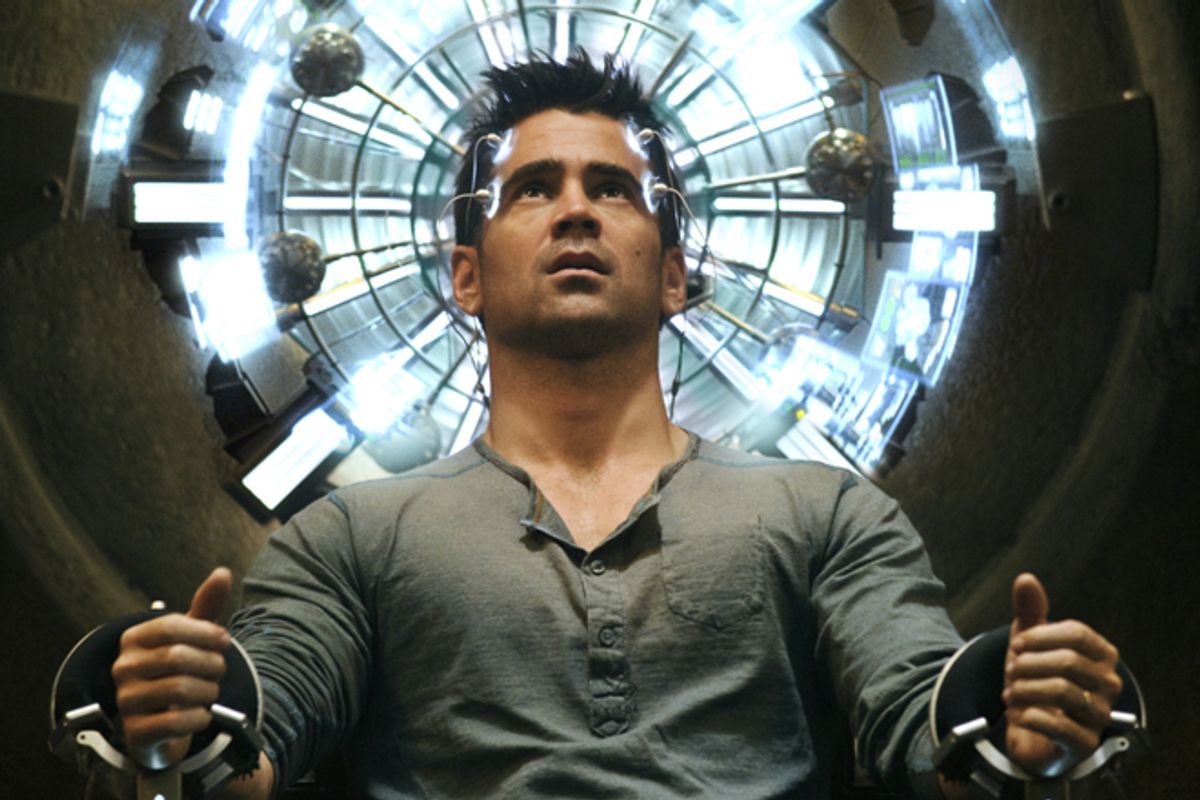 The original Arnold Schwarzenegger “Total Recall” from 1990 – and let’s admit that applying the word “original” to any Schwarzenegger movie, especially that one, feels weird – marked the apogee of director Paul Verhoeven’s meteoric Hollywood career. I still think film history will vindicate Verhoeven as a singular and important figure, who bridged the gap between 1970s European art-house film and big-budget spectacle cinema. (You can find my now-ancient essay in defense of Verhoeven's oeuvre and significance here.) A dedicated ironist and formalist whose work always has a dark, Freudian undercurrent, Verhoeven was following in the footsteps of Alfred Hitchcock and Brian De Palma, but just as clearly paving the way for Christopher Nolan and Zack Snyder.

After sending Schwarzenegger to Mars in his loose adaptation of Philip K. Dick’s short story “We Can Remember It for You Wholesale,” Verhoeven scandalized the world with Sharon Stone’s crotch in the supposedly shocking “Basic Instinct” (that seems almost charming today) – an even bigger hit, and an outstanding psychological thriller that continues to reward repeat viewings, even as a period piece. Then came “Showgirls” and “Starship Troopers,” arguably his most memorable and influential films, although both were considered big flops on initial release, and after that his American career hit the skids. (Now 74 years old and back in Amsterdam, Verhoeven is still trying to launch his long-contemplated “Jesus of Nazareth,” a project I both dread and long for.)

Hollywood now appears to be scouring Verhoeven from its collective memory, after the fashion of the Soviet encyclopedia – or after the fashion of “Total Recall,” now that you mention it. First comes this muscular remake of “Total Recall” from “Underworld” director Len Wiseman, which I would describe as a serviceable summer action thriller with great production design and a monotonous level of pyrotechnics. Next we’ll see a 2013 “RoboCop” reboot from Brazilian director José Padilha of the “Elite Squad” series, which certainly sounds promising on its own terms, and after that Sony and producer Toby Jaffe are reportedly planning a new “Starship Troopers,” with beefed-up CGI effects and a script from the writers of “X-Men: First Class.”

I’m not claiming there’s some ideological attempt to erase Verhoeven’s sardonic, sexually ambivalent satires from the public imagination; the ideology of Hollywood studios is entirely based on nine-digit numerals. But the effect, nonetheless, will be to shove Verhoeven further back into history, and to make his versions of these movies appear secondary to most if not all younger viewers. Now, there’s nothing disgraceful about Wiseman’s “Total Recall,” which conjures up a marvelously detailed post-apocalyptic, “Blade Runner”-style future in which chemical warfare has poisoned most of the globe and all of humanity is jammed into a few uncontaminated corners, mainly the United Federation of Britain, in northwestern Europe, and “The Colony,” formerly known as Australia. Workers from the Colony travel back and forth to London via one of this movie’s coolest inventions, a rocket-propelled spaceship-elevator thingy called the Fall that travels straight through the Earth’s core to the other side in 17 minutes, with gravity reversing en route.

Only the super-rich can get off this diseased planet, apparently, although the Rekall technician played by John Cho suggests that to factory worker Doug Quaid (Colin Farrell) as a possible implanted memory. “I’d like to go to Mars,” Doug muses, and I guess that counts as an in-joke. (The convoluted writing credits list a screenplay by Kurt Wimmer and Mark Bomback and a story by Wimmer, Ronald Shusett, Dan O’Bannon and Jon Povill, the latter three of whom worked on the Verhoeven film.) Doug assembles robot soldiers for the UFB’s quasi-totalitarian regime all day and then heads back to the Colony at night to guzzle beer, snuggle up with his remarkably hot wife, Lori (Kate Beckinsale), and experience some puzzling, action-movie dreams. As you already know if you’ve encountered any previous version of this story, Doug may not be who he thinks he is, and his trip to Rekall for a psychotropic vacation yields unexpected results (or, ahem, at least appears to).

As in the “Underworld” pictures, Wiseman doesn’t waste much time on plot exposition or character development. As soon as Doug visits Rekall and either is or is not injected with Secret Agent serum – learning that he either is or is not a secret agent in “real life,” whatever that is -- all hell breaks loose. He takes down a whole posse of Stormtrooper-looking cybercops and then must engage in a major kickass battle with Lori, who suddenly has an English accent and serious martial-arts skills, followed by an extended chase sequence through their cantilevered, vertical city that resembles parkour crossed with Tetris. This “Total Recall” offers clean, athletic performances from a troika of indubitably attractive B-plus stars, with Farrell and Beckinsale joined later by Jessica Biel as a comely resistance fighter who has both personal and political reasons for trying to reboot Doug’s buried secret identity (or implanted fake double-agent identity, or – crap, I’m not really sure). "Breaking Bad" star Bryan Cranston is also on hand in a limited, villainous role as the dastardly Chancellor Cohaagen, military ruler of the UFB.

I’m not sure this movie or this role are distinctive enough to return Farrell to the top level of Hollywood stardom, which he left behind, for various rumored or real reasons, after playing Sonny Crockett in Michael Mann’s 2006 “Miami Vice.” (Or was the existence of that movie a fiction implanted in my memory?) Still, he would do well to match the trajectory and stability of Beckinsale (Wiseman’s real-life spouse), who has parlayed her lean physique, spectacular hair and perennially pissed-off expression into an improbable action-star career. Making allowances for the fact that it’s August and you’re likely to see this movie with a sunburn and an unstable combination of beer and ice cream in your tummy, “Total Recall” is a doggone good time, with a bunch of nifty technical and visual flourishes, competently managed plot twists and elegant, Wachowski-esque action choreography that eventually becomes deadening because there’s just too much of it and it’s dialed up too high.

I’m not saying that Wiseman’s “Total Recall” compares to the Verhoeven film on a thematic or imaginative or philosophical level (pretentious, I know), because it doesn’t. Of course what’s technically possible to put on-screen today far outstrips what Verhoeven could do with the cutting edge of 1990. But CGI does not equal visual sensibility, and the way Verhoeven uses light and framing and editing – the way every shot serves to establish an unknown world and advance the themes and satirical framework of the story – is subtly but distinctly superior. Still, it’s a relief to report that Wiseman has made his own movie, one that invents its own grim version of the human future (and comes marginally closer to Dick’s original story) and doesn’t try to rinse the original from our brains.