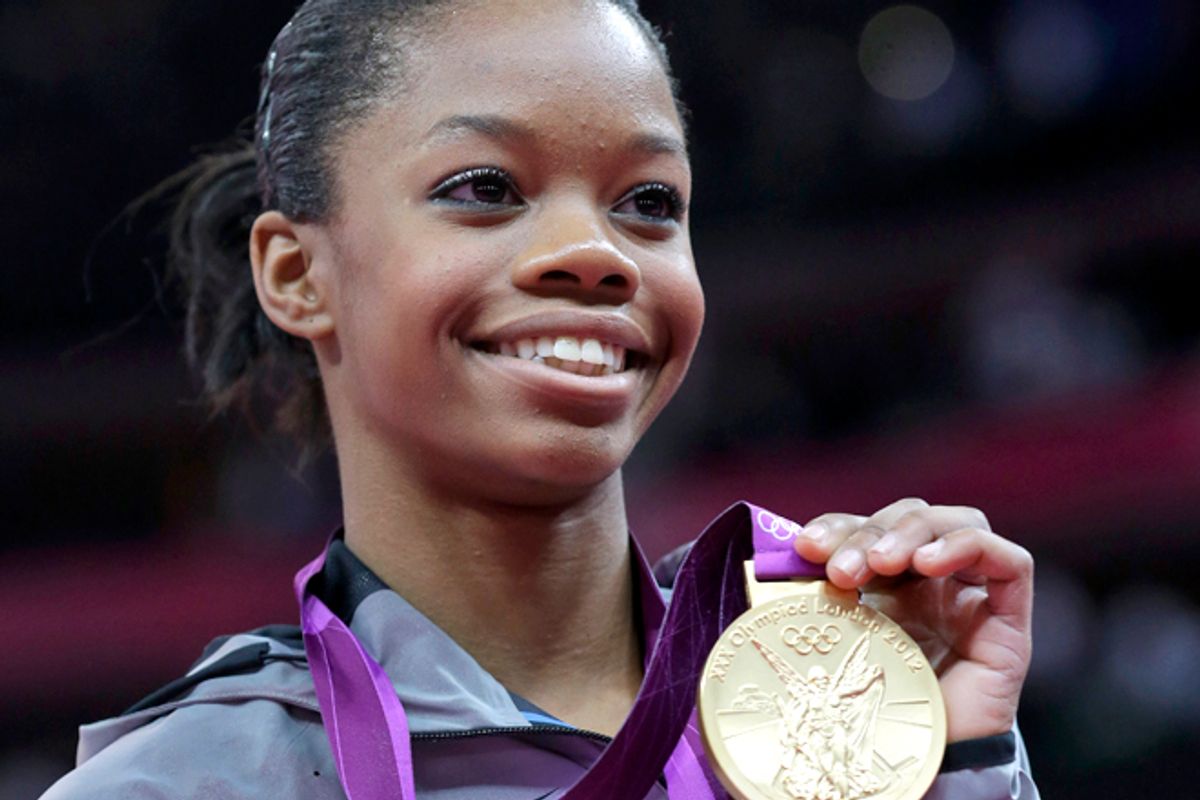 Gabby Douglas is now officially a star. When she won the individual gold medal in women's gymnastics in London Thursday, the breakout darling of the 2012 games, she immediately found herself a celebrity worthy of a cereal box. If her performance in the women's individual all-around didn't blow your mind, you cannot possibly have been paying attention. Yet after her victory, one of the first responses that truly resonated for me was from a colleague who noted, "I would like her more if she were not so, so, so into Jesus." Which raises the question – what is Jesus going to do now for Gabby Douglas' career?

Douglas isn't exactly the only outspoken Christian in America – or even the only high-profile Christian athlete. So jam-packed is this year's roster with them that Douglas didn't even make the cut for the Christian Post's "10 Christian Athletes to Watch." But her newly minted status as a champion and her unguarded outspokenness about her faith are going to give her a new platform from which to preach. After her win Thursday, Douglas said, "I give all the glory to God. It's kind of a win-win situation. The glory goes up to him and the blessings fall down on me."

She's a 16-year-old with both deep faith and profound gratitude, a girl who yesterday tweeted from the Psalms to her followers, "Let all that I am praise the LORD; may I never forget the good things he does for me" and Friday sent out a retweet from the Faith in God feed. And that clearly authentic image of a hardworking girl with strong values makes her a natural icon to her fellow Christians, just as it makes the somewhat less faithful uncomfortable.

We are a nation that is lousy with Christians -- a fair number of whom are not nearly as nice as Gabby Douglas. A lot of them aren't super-clear on the whole "freedom of religion" thing and can get pretty gung-go about trying to shut down people with different beliefs. A lot of them are insistent that everybody in the world should conform to what they know for an absolute fact is the one and only truth. So even when Douglas is merely expressing her personal philosophy, posting #christmotivation quotes in her Twitter feed or talking about how she meditates daily on Scripture, there's always that lurking hint of proselytism. Dear Christians: It's a fine line between sharing your beliefs and selling them. And there's something else too.

As a Christian myself (albeit one of those really freaky papist kinds), I've often wondered what it is about Christians like Douglas that unnerves me so. The closest I've been able to figure it is that Douglas and her ilk seem to espouse a faith based on what is commonly referred to as "The God of Parking Spaces." It's the deity that grants wishes to those who ask nicely. Douglas is a girl who has described God as the figure who's "waking me up every morning and keeping me safe in the gym every day." She told People Thursday, "I was on the bus and it was raining and I thought, 'It's going to be a great day.' My mom used to tell me when I was little, 'When it rains, it's God's manifestation, a big day's waiting to happen.' I texted my mom, 'It's raining. You know what that means.'" It means that Russian girl is going down, I guess.

Last week I had lunch with a friend who asked me how my own faith had played into my struggles with cancer and my current recovery. I told her I don't believe in a God who punished me with disease any more than I believe in one who rewarded me with health. I certainly don't believe in one who "keeps me safe." I don't think I got to live while my friends Phoebe and Gigi died because I prayed better. I don't think the force that I, for want of a better word, call God rains down sufferings or blessings based on individual piety. I believe in a grace that gives me the strength to muscle through the sufferings, and the gratitude to appreciate the blessings. That's why the subtle implication, when an athlete or an artist says that God was with them on a winning day, seems so strange, and why, I imagine, it rings so hollow for others. And though I am in awe of a young girl whose talent is damn near miraculous, I likewise don't believe in a God who made it rain for her to win.