Gymnastics scoring is bizarre. But Raisman controlled her own destiny, decided to play it safe -- and paid for it 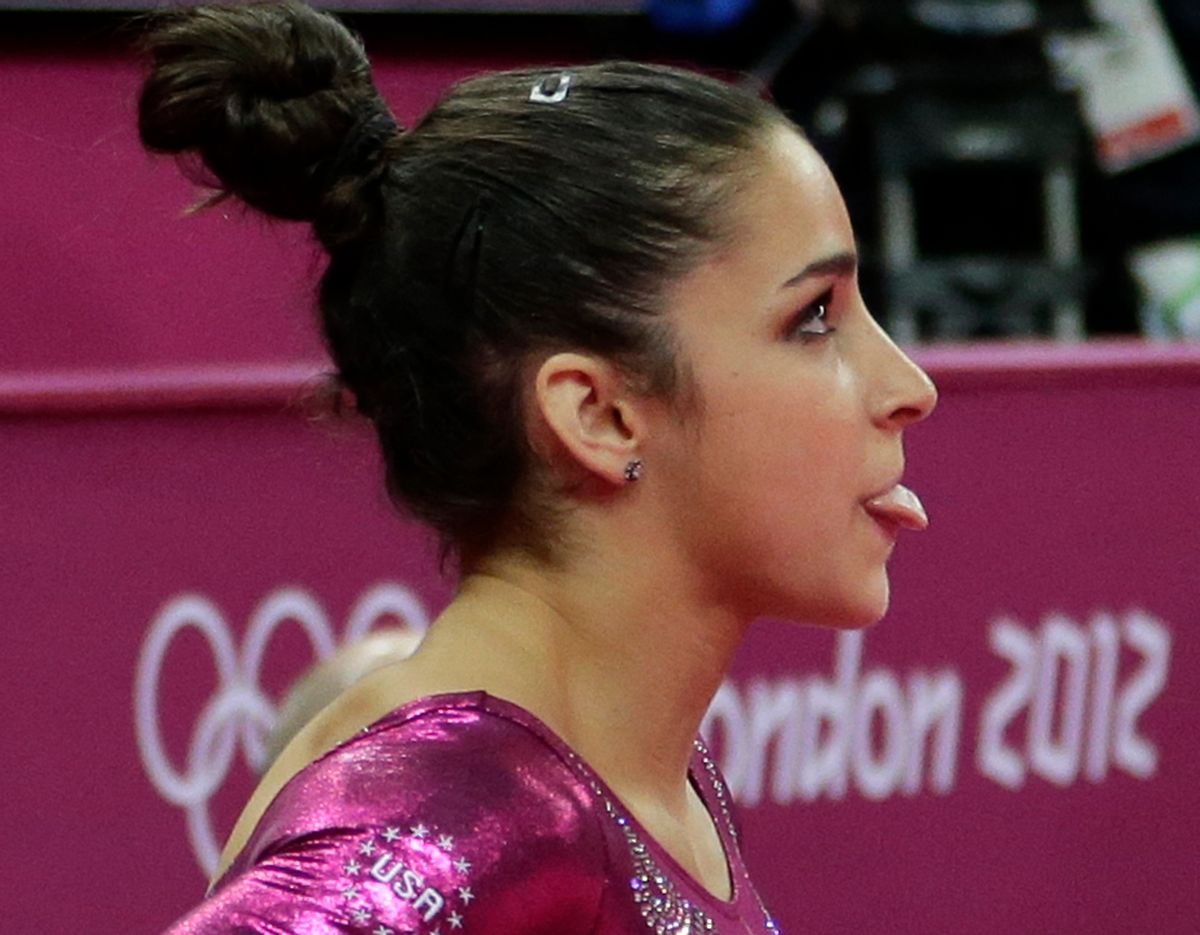 Raisman awaits the scores to be posted (AP/Gregory Bull)
--

Does anyone this side of Tim Daggett, actually understand gymnastics scoring? On Thursday in the women’s all around, it became clear that sometimes not even the competitors do.

Gabby Douglas showed remarkable composure in winning the women’s all-around, putting enough distance between her and her competitors to keep any potential scoring controversy at bay. That fell to the bronze medal battle between Douglas’ teammate Aly Raisman and Russian Aliya Mustafina. There was a long awkward moment as the two finished in a tie for third. It only got more awkward as Raisman lost because of a new, and rather convoluted tiebreaker system. To add insult to injury, Raisman found out that she had lost, not from an official or from her coach, but from a member of the media.

Let it be noted that Raisman had her chance to avoid all this, one way or another. As she had in the team competition, Raisman made a last-second decision to eliminate a technically difficult tumbling pass from her floor exercise routine. If Raisman had pulled off the move, she would have easily won the bronze outright. If she went for it and missed—as she had in practice—then that, rather than the tiebreaker, would have decided her fate. While the spunky Douglas will certainly reap the rewards from her gold medal, it seems likely that some Mad Man will find a way to turn the hard luck stories of Jordyn Wieber and Raisman as a way to pitch some product. In any case, they’ve both got their team golds, and will contend for further hardware in the upcoming individual apparatus finals.

And as for the sport of gymnastics, how about just turning back the clock? For all of the flaws of the old system, in place before 2006, at least one thing was clear: a perfect 10 was, well, perfect. Now? It’s a far less-than-perfect 16 point something, depending on the degree of difficulty.

Citius. Altius. Fortius. American swimmer Rebecca Soni channeled that Olympic motto on Thursday, setting a world record in the 200-meter breaststroke. It was a remarkable moment, and one that's been all-too-rare at these Olympics.

The higher/faster/stronger slogan wasn’t devised by an NBC marketing guy, or a consultant to the IOC. It dates back to the ancient Greeks, who grasped the enduring and universal appeal of setting a benchmark and then topping it.

“I’ve been chasing under 2:20 for so long,” Soni told NBC’s Andrea Kremer after the race. “That was my career right there. I was kind of hoping for a gold medal but this is so much more than that.”

Every four years, someone wins a medal in the 200 breaststroke. Soni had done something far more profound. She swam that race faster than any woman in history. Soni understood the power of that number, but it seems that the sport’s powers-that-be don’t quite get it.

Soni’s world record—her second this week—was one of only six set so far at the London Games. Compare that to Beijing in 2008, when 25 world records were set. Four years ago, any swimmer who captured gold without also notching The Fastest Time in Recorded Human History was considered a little bit suspect. By contrast, the first swimmer to set a world record in London—China’s Yi Shiwen in the 400 individual medley--was immediately the subject of whispers. (Speculation that was, to be fair, fueled by the fact that her last 50 meters was faster than the freestyle lap turned in by men’s gold medalist Ryan Lochte.)

What changed in four years? The damn swimsuits. Four years ago, you’ll recall, swimmers were wearing high-tech full-body suits like Speedo’s LZR Racer which took half an hour to put on -- but also reduced a swimmer’s drag in the water and increased buoyancy. The suits were faster than skin and the times reflected that.

Like baseball’s machers, who watched as juiced sluggers set home run records, FINA, swimming’s international governing body, sat back as records were shattered on a routine basis and basked in the sport’s newfound buzz. Instead of stepping in and stopping the Swimsuit Wars before they started, FINA ruled individually on the legality of each iteration of the new high-tech suit.  And soon the record book was in shambles—over 130 world records were set with the LZR--with much of the damage done in Beijing, where virtually every race was won while wearing one.

Indeed, it took a swimmer to smack some sense into the sport. When Michael Phelps intimated that he might retire if the suits remained legal, FINA finally banned full-length suits in 2010 in favor of shorter suits made of conventional “woven” fabric (Making lemonade of a sort, Speedo “upcycled” the banned suits into couture dresses. )

Still the damage had been done. Some suggested that the word records set with the suits should be marked with a Ford Frick-style asterisk, like the kind the baseball commissioner affixed to Roger Maris' 61st home run. But for the moment, there's a silver lining: World records are again rare and truly meaningful. How sweet is it for a swimmer like Soni? Four years ago she, like everyone else, raced in the LZR. But yesterday she managed to break a barrier that had eluded her even in her high-tech superhero suit.

Even in an age of innovation, clothes don’t always make the swimmer.

With track and field starting today, watch for another random rule change to affect the world record haul, and quite possibly determine who ends up racing for those records.

In 2010, the IAAF, the governing body of track and field, changed the rules regarding false starts. It used to be that runners were allowed one false start. The second one would lead to a disqualification. Bowing to pressure from broadcasters, they overhauled the rule: one false start and you’re gone.

The folly of this new regulation became apparent in the 2011 World Championships. Olympic champion and world record holder Usain Bolt jumped the gun in the 100-meter finals and just like that, he was out of the event.

Having Bolt DQ’d from the field at the Olympics is everyone’s worst nightmare—the IAAF, the organizers, NBC, and of course Bolt himself. With that in mind, you can be sure that Bolt will be oh-so-careful leaving the blocks this weekend as he tries to repeat as The World’s Fastest Man. You can also be sure that his excess of caution will preclude any possibility of him electrifying the crowd by setting a world record as he did in Beijing. When will the pencil pushers learn to leave well enough alone?