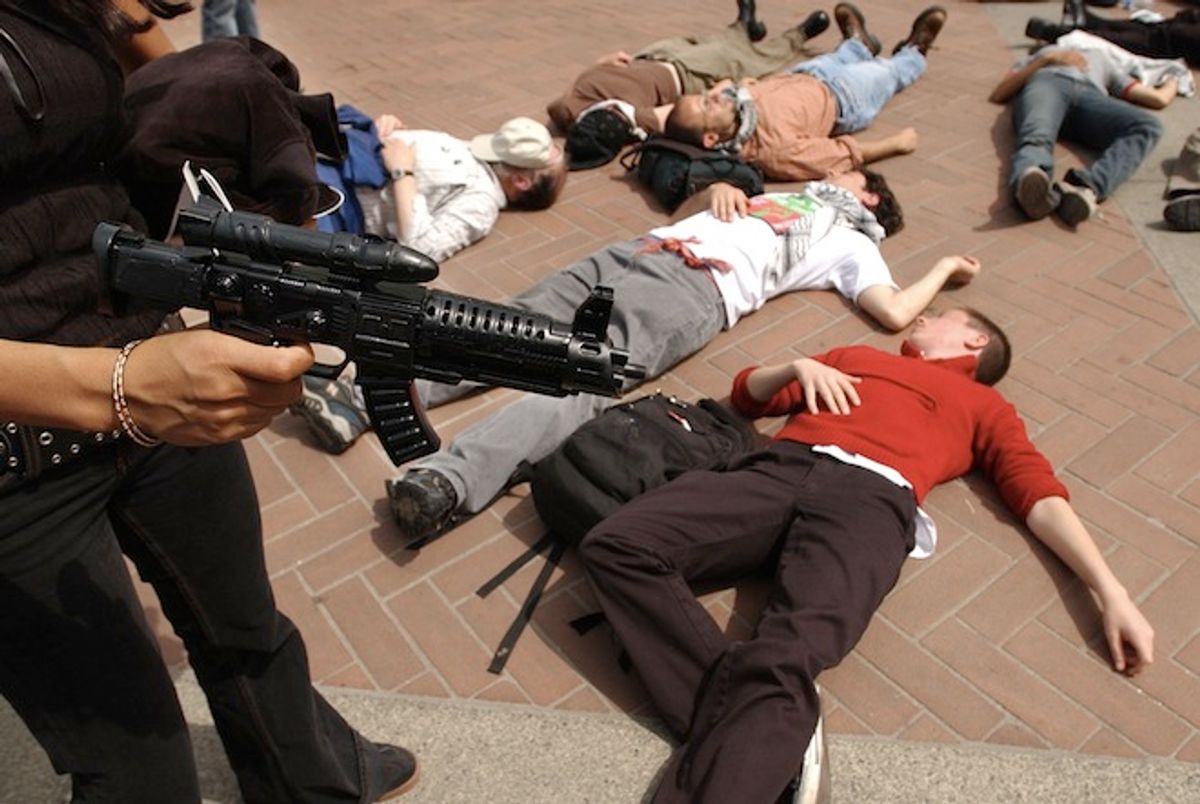 A protester holding a plastic gun stands over other demonstators with the group "Students for Justice in Palestine," during a mock "die-in" at the steps of Sproul Plaza, Wednesday, April 9, 2003, on the University of California at Berkeley campus in Berkeley, Calif. (AP Photo/Ben Margot)
--

Does the University of California forbid the expression of some disfavored political views on its campuses?

Not yet. But if the UC's Advisory Council on Campus Climate, Culture, and Inclusion has its way, it might start.

Last month, that council issued its "Jewish Student Campus Climate Fact-Finding Team Report & Recommendations." Through that report, the council recommends that the UC system adopt ill-defined hate speech codes and prohibit "hate organizations" from speaking on UC campuses. Those policies would inevitably trigger litigation against the cash-strapped UC, but the council is full of the sort of you-can-take-that-guy bravado-by-proxy that inebriated friends display in late-night bar fights: "The Team recognizes that changes to UC hate speech policies may result in legal challenge, but offer [sic] that UC accept the challenge."

What was the impetus for such a sweeping recommendation? The council, tasked to explore how the UC could be made more inclusive and welcoming for Jewish students, found that many were distressed by the rhetoric emerging from campus debates about Israel and its policies. Organized events like "Israeli Apartheid Week" have become increasingly contentious and fraught with incendiary language, particularly at UC Irvine and UC Berkeley, where such protests led to a lawsuit asserting that the university failed to protect Jewish students from assaults by violent anti-Israel protesters.

Should universities protect students from violence? Of course. Does the First Amendment protect assault? No. But the council's report suggest that it does not aspire merely to keep students physically safe. Rather, it suggests that the council wants the UC to protect students from constitutionally protected political rhetoric they find painful and offensive. In discussing student reactions to anti-Israel protests, the Council describes and implicitly condemns a wide variety of speech that, while confrontational and inflammatory, is plainly protected by the First Amendment:

These protests routinely include “Apartheid Walls”-- a depiction of the barrier/wall constructed by Israel along its border with the West Bank; “die ins” in which students portraying Palestinians spontaneously fall down as though they have been subject to mass killings by Israelis; mock “checkpoints” which are intended to mimic Israel checkpoints on the West Bank in which students coming through the “check point” are supposed to experience what Palestinians are allegedly subjected to. These “check points” include students re-enacting scenes in which Israeli soldiers are portrayed as engaging in indiscriminate acts of violence and degradation of Palestinians; and the dissemination of literature and information which accuse Israel of “genocide,” “ethnic cleansing” and the imposition of an “apartheid state.” These protests describe alleged atrocities committed by Israelis devoid of context with the unmistakable message that Israelis/Jews are carrying out a unilateral campaign of violence directed against innocent Palestinians. Most outrageously for Jewish students, the protests routinely analogize Israeli treatment of Palestinians to the Nazis' treatment of Jews.

The council's response to student complaints of such expression is to recommend that the UC "push its current harassment and nondiscrimination provisions further, clearly define hate speech in its guidelines, and seek opportunities to prohibit hate speech on campus." Does the council really intend to suggest that the UC prohibit the expression of some political ideas? Apparently so. The Jewish Daily Forward interviewed University of San Diego Adjunct Professor of Law Richard D. Barton, one of the authors of the council's report, who advocated very broad censorship:

Asked for an example of hate speech, Barton, the co-director of the panel that produced the report, said: “The issue is when [pro-Palestinian] groups come on campus and they say, ‘We are the voice of the Palestinians and our voice isn’t being heard and it’s because Jews control the media.’ That is flat-out anti-Semitism.” Barton said he didn’t know if calling Israel an apartheid state would meet the criteria. “I couldn’t give you an answer without looking at the definition of how courts define hate speech.”

In fact, the statement "Israel is an apartheid state" — whatever its merits — is an archetypical assertion of political opinion clearly protected by the First Amendment. So, for that matter, is the hoary and bigoted trope that Jews control the media. It is either horrifying or comical, depending on your mood, that a law professor would need to look up cases to figure that out.

I am cautiously optimistic that cooler and more constitutionally informed heads will prevail and that the UC's leadership will reject the council's censorious recommendations. If they don't, they're in for a fight they'll likely lose. The Foundation for Individual Rights in Education, which has successfully challenged many unconstitutional campus speech codes, is already looking into the matter. William Creeley, FIRE's director of legal and public advocacy, was blunt in his assessment:

I was shocked to realize that the advisory committee was calling for a public university system to willfully, deliberately violate the First Amendment. Decades of case law from the Supreme Court on down has made clear that the public university campus is, as Justice William Brennan put it, 'peculiarly the marketplace of ideas.' And as Justice Louis Brandeis said, the best — and only — answer for 'evil counsels' is 'good ones.' In other words, censorship — even of so-called 'hate speech' — is not only unconstitutional for a public university, it's also ineffective, wrongheaded, and contrary to the academic tradition.

He's right. The best response to "hate speech" is more speech, not unconstitutional regulation that will lead to expensive litigation. Speech can be painful. But censorship is not the right balm for that pain. Vigorous rebuttal is.

Update: In an email, the Media Relations Director of the UC Office of the President states that the report its recommendations are from a working group of the council, not from the council itself.