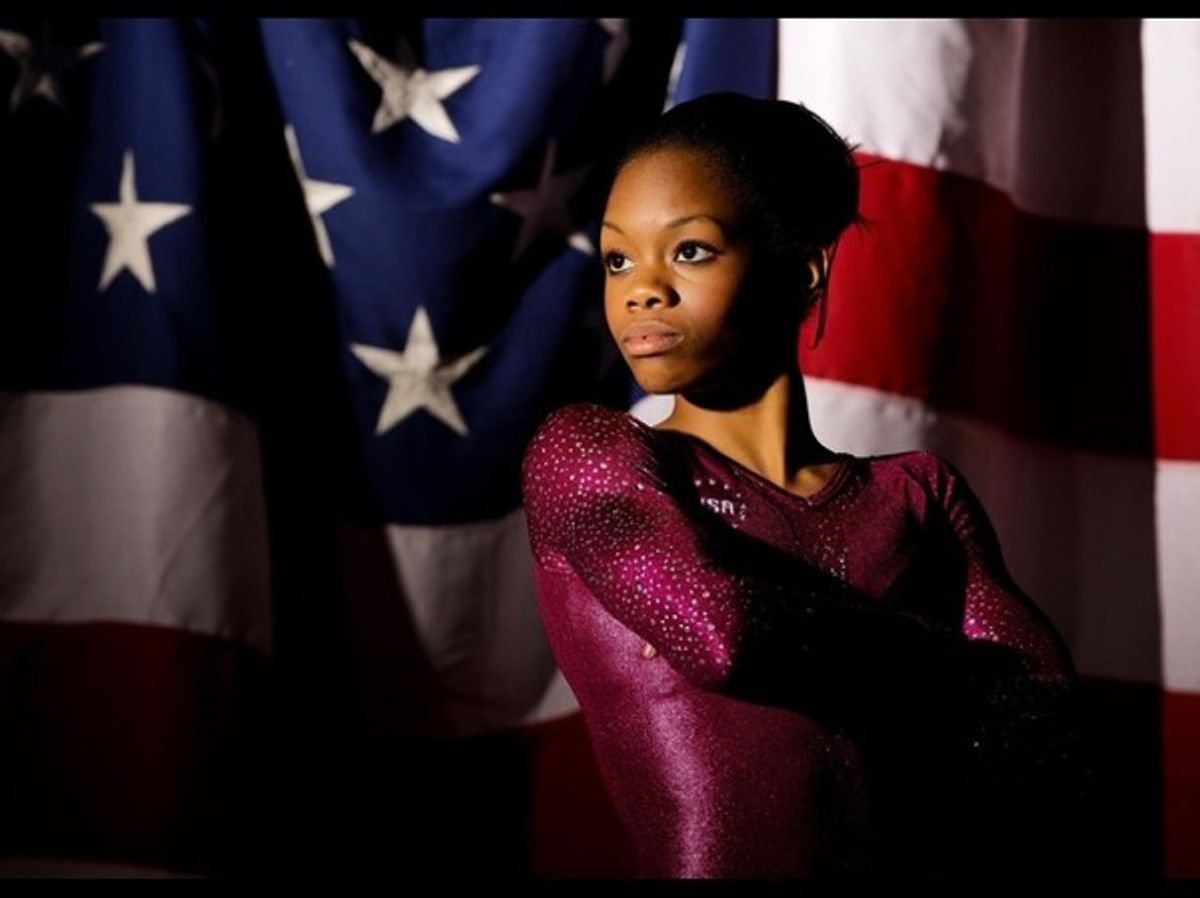 I had a chance to chat yesterday with Michael Butterworth, Associate Professor in the School of Media and Communication at Bowling Green who specializes in the rhetoric of sports. (He also writes for the sports, politics and culture blog, The Agon.) Aware the subject is about a mile wide, we aimed to get a rope around some of the dominant visual and political themes of the Olympic coverage so far.

First, we talked about the dramatic upending of expectations in women’s gymnastics. (As background, Michael described how the all-around winner of the summer gymnastics competition, just like the women’s winner of Olympic figure skating, automatically becomes the newest U.S. sweetheart.) After discussing how NBC was reeling after Jordyn Wieber, the world champion and “odds-on” favorite failed to qualify for the women’s all-around — after her team gold, NBC, still obsessing on Jordan, turned it into a “redemption story” — Michael was very curious to see how Gabby Douglas would fit the role, and handle the marketing windfall.

With the news just hours old (especially if you were watching the nightly slice-and-dice package on the West Coast), one obvious and interesting dimension to the development had to do with having our first African-American Olympic sweetheart.

As Michael wrote me this evening:

Although sports media knew about Douglas, how has media adapted to her surprising victory? Some of the narrative has focused on her relatively recent arrival on the gymnastics scene; others on the fact that her family moved from Virginia to Iowa so she could be fully dedicated to Olympic training. Now that she has won the all-around competition, however, the most obvious storyline is that she is the first African American gymnast to capture gold. Several sources have noted this achievement and, during NBC’s coverage, Bob Costas suggested that Douglas, who has said she was inspired by African American gymnast Dominique Dawes, will now inspire a new generation of young African American girls who find themselves saying, “Hey, I’d like to try that too.”

I saw the image above posted by Phillip Cunningham, who teaches media studies at Quinnipiac University. It was also the portrait of Gabby posted this evening by the Facebook group, “African Ancestry.” It’s a powerful image, showing Douglas with an expression of conviction and fearlessness. It could very easily stand in as a representative image of the “strong, black female.” As she now takes center stage in the American sports arena, I am curious to see how she is represented and curious to see if this image, or others like it, get mainstream circulation. I suspect it will be quite the opposite, however, with an emphasis on her smile instead.

Writing back a little later, he added:

Here’s a potential answer, from ESPN.com… Michael went on to contrast the two photos:

The image ESPN published provides us with “a closed narrative,” one in which equal opportunity is available to all who are willing to seize it—Douglas, after all, having done precisely that as her commitment and achievement demonstrates.

At the same time, however, the present climate is one in which the accomplishment of a prominent African-American will be seen as evidence of the health of the American Dream without risking any questions about the extent to which that dream is accessible to racial and ethnic minorities. What the image [leading off the post] suggests is that there is unfinished business ahead; the conviction expressed by Douglas hints at the resolve needed to finish it. It is, therefore, a potentially uncomfortable image, making it more than likely that we’ll be seeing little of it in the days to come. Michael was also interested in the attention paid to U.S. gymnast and bronze medalist, Danell Leyva — considering that a bronze medal is typically not worth anywhere near the amount of time and hype NBC dedicated to the men’s individual gymnastic finals on Wednesday night.

Michael felt the attention was motivated by two factors, one physical (Leyva was on many of the “hottest Olympians” lists — this Yahoo slideshow was representative) and the other political, Leyva hailing from Cuba. Again, the narrative of the “American dream” comes into play, Michael explained. It’s not just that he’s an immigrant, though. You could say America saved him from the last bastion of Communism. That said, Michael feels that American Olympic commentators are still missing the cold-war narrative and are still not sure how to frame international rivalry in more dramatic terms.

I also asked him if coverage of the men this year seemed more sexualized, bringing the objectification of male athletes closer to the visual treatment of the women. Specifically, I showed him some of the photos from this “unnecessary censorship” post from Buzzfeed of diver Tom Daley, with these two variants (1,2). Not surprisingly, Ryan Seacrest’s name also came up, Michael seeing the presence of this non-athlete as consciously marketed to what the network would identify as a stereotypical female audience. Michael thought there might be more sexualizing of the male body in this Olympics, but that it still didn’t make for an equivalence. Referencing Toby Miller’s book, “Sports Sex,” Michael related a typical pattern when it comes to male sport bodies. Whereas women athletes are often seen as sex symbols, their physical identity typically conflicting with or obscuring their athletic identity, attractive males (Ryan Lochte’s name came up, in particular) are still seen as athletes first, sex symbols second.

Hopefully I’ll have a chance to touch base with Michael again for another update.

By the way, just a photo note on the Gabby Douglas picture by Kevin Jairaj of US Presswire leading off the post. It was taken during the same assembly line set of photo sessions that produced, and led to the huge controversy surrounding Joe Klamar’s “unusual” Olympic portraits. To the extent this unusual Douglas shot, with the non-traditional lighting, also came out of the rushed and spontaneous sessions that afternoon, it lends that much more justice to the atypical images created that day.