This week's Texas primary and Chick-fil-A brouhaha make it clear: In the GOP, style trumps substance 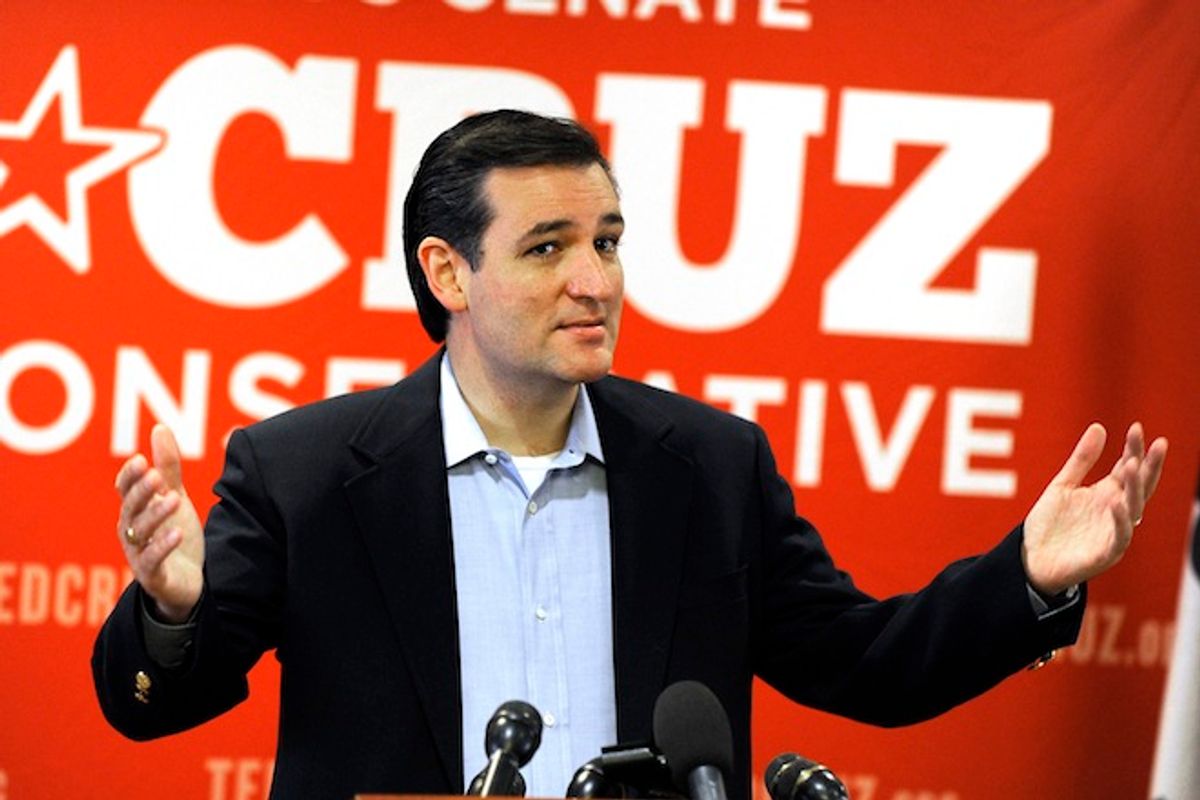 Welcome to the politics of attitude.

The two big stories on the Republican side of the aisle this week were the big Texas showdown in which Tea Party candidate Ted Cruz easily defeated Lieutenant Governor David Dewhurst for the Senate nomination in that state and the Chick-fil-A brouhaha. You rarely get better examples of exactly what movement conservatives really care about, and how little it has to do with the substance of policy.

The Cruz/Dewhurst race was just about the ideal test case for the politics of attitude. Conservatives, both nationally and within Texas, rallied to Cruz. Why? Because Dewhurst was, to them, insufficiently conservative. And yet there was, near as I can tell from the reporting on the contest, absolutely no content to that accusation. This wasn’t the case of someone who had voted for TARP, or had once supported a health care insurance mandate, or had been a squish on immigration. No, the main talking point against Dewhurst was very simple: He had displayed a willingness to cut deals with Democrats. Not bad deals, just compromises of any kind. Republicans, the story goes, lose because their politicians just don’t have the backbone to stand up to the liberals in Washington, and Dewhurst was exactly the kind of politician who would perpetuate that.

I hardly have to explain why the Chick-fil-A controversy was all about attitude and not substance. To be sure, there was a tiny bit of public policy involved here, with a handful of Democratic politicians suggesting that a few cities might move against the chain. But the reaction, and the passion, were pretty obviously out of proportion to any actual threat, as was the rhetoric about feeling oppressed by vicious gangs of liberals who were wielding the weapon of public opinion against them.

What we’re seeing here is a curiously substance-free conservative movement. Granted, there are plenty of cases of substance-free liberal activism. And there are some real issues that Republicans do care about: abortion, say, or … well, it’s hard to say, isn’t it? I mean, Republicans certainly care deeply about repealing “Obamacare,” right? But generally not deeply enough to have any clue at all what’s actually in the Affordable Care Act. I’m still pretty sure that Mitt Romney could rename the exchanges as “Ronald Reagan Insurance Marketplaces,” the subsidies as “Free Enterprise Vouchers,” and the individual mandate as, I don’t know, the "Stop the Free Riders Program" or something, and not one in a hundred conservatives would complain about the new plan. As I’ve said, they don’t mind the Affordable Care Act at all; it’s Obamacare that they hate. Which, perhaps, explains why Mitt Romney could get himself nominated in the first place despite never disowning his Massachusetts health care reforms.

This lack of interest in policy substance also lends itself to fads and crazes. Remember, for example, all the fuss about Obama Administration's “czars” a couple of years ago? Or consider one of the sillier Tea Party “issues”: opposition to the direct election of senators. That one was so popular that it found its way into Rick Perry’s campaign. Both appear to be totally forgotten, as far as I can tell, sort of as if they were the conservative establishment’s version of McRibs, brought out for a while and then withdrawn from the market until people miss them.

Even one of the core GOP issue positions, tax cuts, has been exposed during the Obama years as not all that important, at least not as important as opposing liberals. After all, few Republicans in Congress were tempted by the large tax cuts in the 2009 stimulus bill, and almost all of them opposed the payroll tax cut Obama has pushed more recently.

I really don’t think that the liberal side is anywhere close to being this substance-free. Sure, most people, even activists – even politicians – aren’t very wonkish and aren’t very interested in or well-informed about the details of policy. That’s true on both sides. But I don’t think Democratic presidential candidates could get away with being anywhere near as substance-free as the recent crop of Republicans are. Certainly, the 2008 Democratic candidates were just about all well-versed in policy.

None of this means that a Romney victory, especially coupled with a Republican congressional sweep, wouldn’t produce policy changes that liberals would hate. If nothing else, once in office, Republicans would reward Republican-oriented constituencies and punish Democratic-aligned ones (just as Democrats reward and punish groups they like when they are in control). Nor are Republicans likely to act on areas that Democrats see as pressing problems for the nation. Moreover, there certainly are some Republican-aligned groups which do have clear, specific policy preferences, and a Romney Administration would surely attempt to enact those.

But as far as real dedication to policy change among movement conservatives at large – and I’m talking about activists here, people who really are engaged in politics — or even, in most cases, among Republican politicians, I’m really not seeing it. As with the Cruz/Dewhurst race, it’s all about the attitude.