How to be alone

We all have to learn to be by ourselves, whether it\'s after a breakup, a move or a divorce -- but how, exactly? 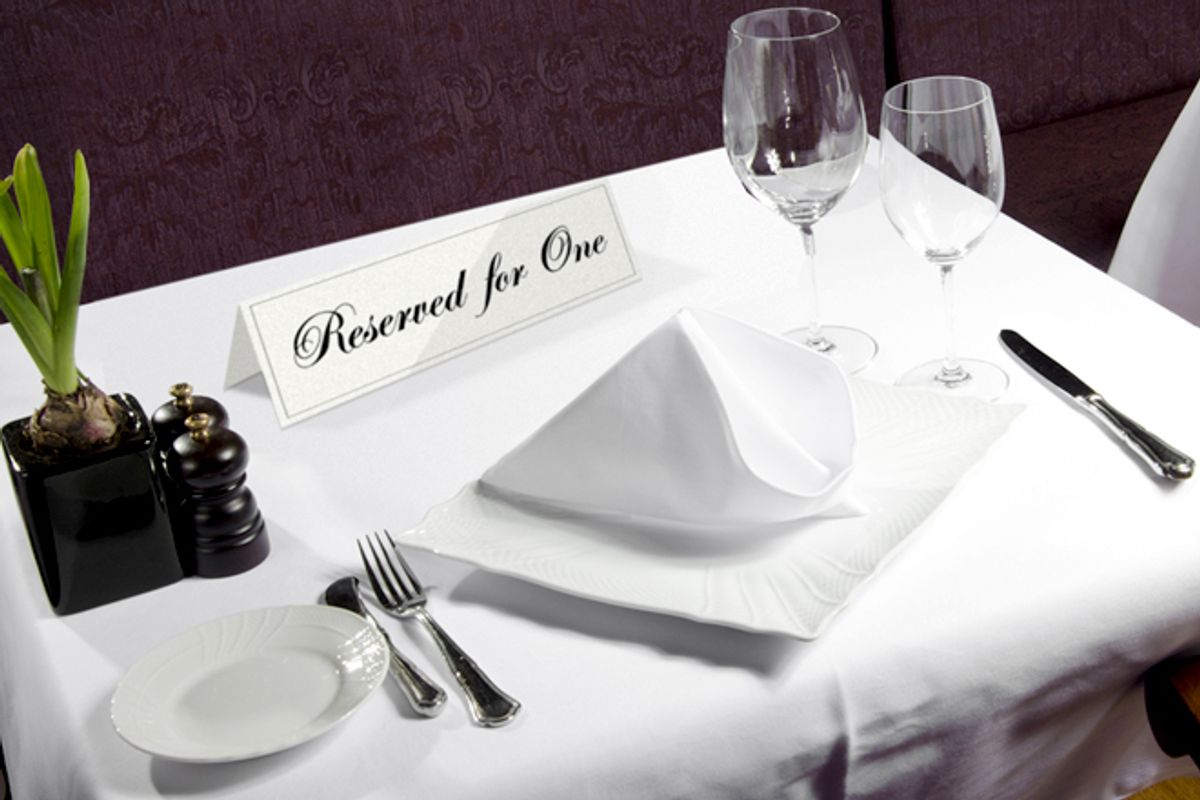 I recently went through a breakup. It was the worst -- they always are -- but as I wrestled with sadness over the end of the relationship, another perplexing challenge arose: how to be alone.

I've been through a million -- OK, three -- breakups before. I’ve spent plenty of time single in between. I thought I'd be good at this alone thing by now. I'm an only child, for crying out loud. Instead, on the heels of another split, I’m amazed at how difficult just being by myself can be. I have friends – they are wonderful -- but I feel a suffocating solitude at the end of the night, in the morning or at any moment of the day that isn't scheduled with distraction. It wasn’t this way when I was coupled. Just the knowledge that I had "a person" to call my own (even though I know in my bones that you can never truly call another person "your own") was a comfort; that knowledge itself was a constant companion.

How does one become good at being alone? This question might be uniquely poignant for those of us fresh out of a breakup, or still in our 20s, but it's a question people confront at all stages of life and for all sorts of reasons, whether it’s a big move to a new city, an unexpected death, a divorce or any countless number of things that life can throw your way. And regardless of your romantic status or friend count, it's nice to be capable of enjoying a movie or dinner alone. A friend told me a story about an acquaintance who is married with kids: She has a meltdown whenever her family goes out of town; she doesn’t know what to do with herself.

So, I decided to seek out the world's wisdom on how to be alone. (As I tweeted earlier this week, "One of my favorite things about being a journo? Being able to take my own burning questions to experts under the pretense of public service.") In terms of romantic aloneness, Anna David seemed like a good first stop: She wrote the memoir "Falling for Me: How I Hung Curtains, Learned to Cook, Traveled to Seville, and Fell in Love," and understands the ache of singlehood all too well. "I spent so much time where everything was filtered through this lens of 'but I'm alone.' And I was haunted by the thought, 'I'm going to be alone forever,'" she says.

It took a long time to move past that fear. In fact, it took setting out to write a book about bettering herself in order to land a man. "The idea I pitched Harper Collins was very much 'Let me get totally perfect so that I can find the perfect guy to fall in love with me and the last chapter will be about how in love we are,'" she says, but none of that happened. While the book ultimately delivers a happier message of self-love, she privately felt like a failure for still being single. Shortly thereafter, though, she "bottomed out" in a relationship where she says, "I just got crazy and obsessive and I started to believe ... it's this guy or a lifetime of eating dinner with my cat."

Either through the writing of the book or that final relationship disaster, she says, "I basically realized that it was the old cliché: that no guy was ever going to make me happy," she says. "I was buying into this age-old fairy tale that at the end of the movie you end up with a guy."

In my search for wisdom on spending time alone, regardless of relationship status, I quickly found that very few experts want to talk about being alone; they'd rather talk about how to not be alone. Judy Ford, the author of "Single: The Art of Being Satisfied, Fulfilled and Independent," is a rare exception to that: "We are born alone and die alone, and deep within our souls we live alone," she tells me in an email, instantly invoking those universal truths that hurt the most. "No one else ever abides in our skin. If we haven't yet come to terms with this ultimate truth, we are scared out of our minds to be alone."

She adds, "The fear of public speaking is a mere tickle in comparison to the seismic ripples of horror that reverberate through the heart when faced with spending the weekend alone," says Ford. "People are more courageous about going to the dentist than they are about eating in a restaurant alone." That's true for young as well as old: Many seniors feel lonely "because they have not developed their inner life," she says.

Her practical tips for conquering solitude are to get creative ("creativity is the cure of loneliness"), push yourself to "do something you have never done before" (like taking yourself out to dinner), admit your loneliness to others ("you might be surprised that they feel lonely too"), "get cozy with the gaps," those empty spaces in between plans, and remind yourself, "Loneliness is not going to kill me." These aren't easy fixes -- and may induce eye-rolls from self-help haters -- but they're crucial to happiness, she argues: "To experience wholeness, first we experience the void."

Her emphasis isn't on learning to be happy alone, but rather recognizing what level of social interaction makes you happiest -- and it's different for everyone: "Maybe you don't have a sweetheart, but being around a lot of other people might make you feel happier even if you wish you had that," she tells me. "I think people sometimes aren't very aware of how much they need to be around other people."

As for making the most of whatever degree of aloneness that you have -- whether it's being a bachelor or living in a new town with no friends -- she says, "You don't wait for circumstances to change in order to have the life that you want. If you want to go to France, don’t think, 'Oh, as soon as I have a boyfriend I’ll go to France' or 'As soon as I get married I'll fix up my apartment.' Have the life that you want as much as you can now." That's instead of putting your life on hold, or living in ignorance of what you do have: "It's things like electricity, the minute your electricity goes out you're like, 'Oh my gosh, if only I had electricity I'd be so happy!' But it's not like we walk around in an ecstasy every day over electricity."

As for simple, radical acts of public solitude -- like taking yourself out to dinner -- Eric Klinenberg, a sociologist and author of "Going Solo: The Extraordinary Rise and Surprising Appeal of Living Alone," says a large part of people's discomfort is the result of social expectation. "There are some [activities] that are socially approved to do alone, like you wouldn't think twice about going to a coffee shop by yourself, but going to a fancy restaurant or a play feels strange." That strangeness is typically the result of our knee-jerk assumption that doing things alone equals desperation.

Two years ago, the video “How to Be Alone” starring writer Tanya Davis and her poem about the "freedom" of being by yourself -- eating, dancing, reading, hiking -- went viral. The video got more than 4.5 million hits: Clearly, her sweet and simple advice (for example, “We could start with the acceptable places, the bathroom, the coffee shop, the library”) resonated with people. As she says in the four-minute clip, “Society is afraid of alonedom, like lonely hearts are wasting away in basements, like people must have problems if, after a while, nobody is dating them. But lonely is a freedom that breathes easy and weightless and lonely is healing if you make it.”

It's odd that being alone requires any instruction. As Ford so exquisitely and painfully put it: We’re born alone, we die alone and “deep within our souls we live alone" -- but it's one of life's many poetic ironies that we couldn’t be more together in our aloneness.