His comment about Palestinians wasn't a gaffe: It was part of his concerted efforts to demonize his opponents 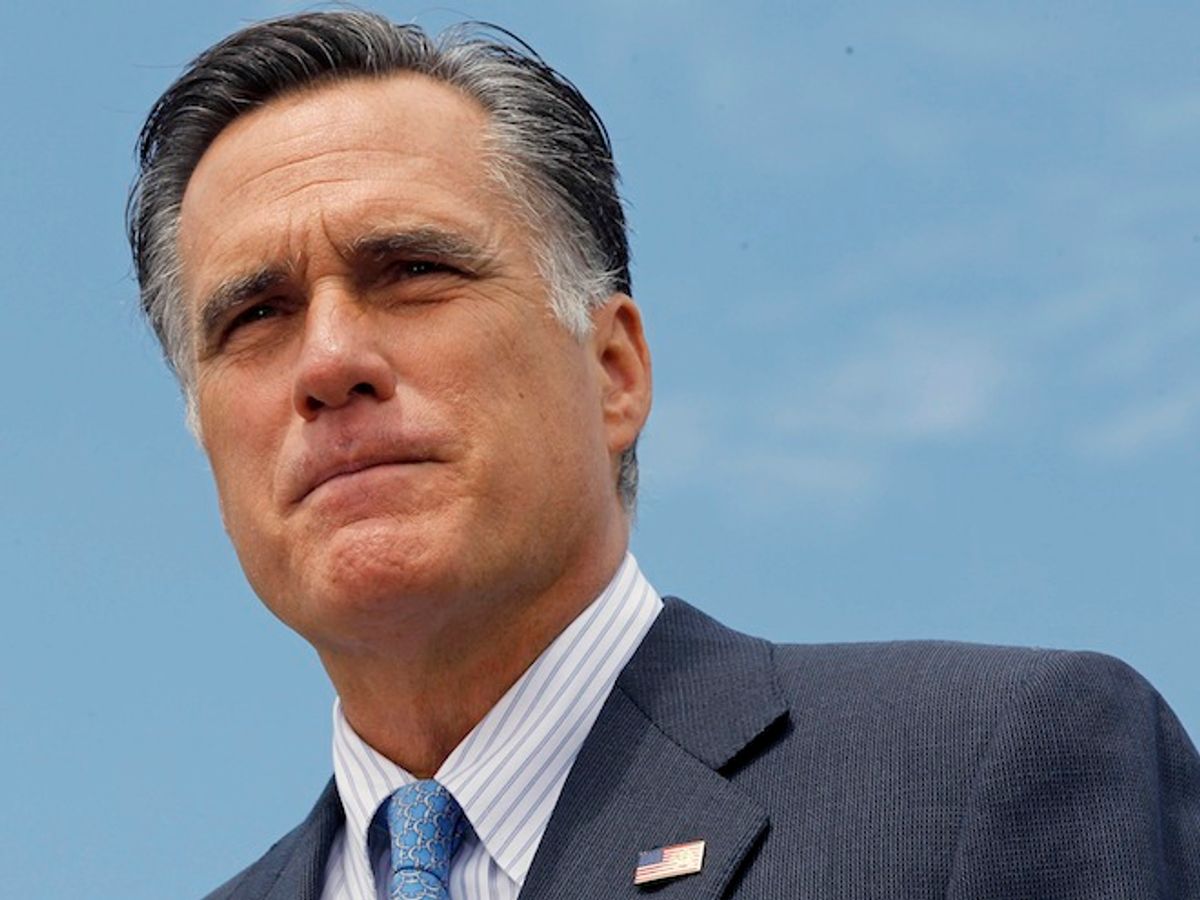 In his latest overseas gaffe, Mitt Romney pontificated on the economic disparities between Israelis and Palestinians. Ignoring Israel’s role in perpetuating these differences, Romney instead offered a clear and simple explanation: “Culture makes all the difference.” These remarks, as well as his suggestion that if president he’d park the U.S. embassy in the highly contested city of Jerusalem, have surprised many in the U.S. and abroad and have drawn accusations of everything from ignorance to outright racism.

But Romney’s statement that Israelis’ cultural superiority explains their economic success — and, by extension, that the “backward” Palestinians are to blame for their failures — isn’t particularly surprising. Not only does it smack of the familiar Republican tactic of demonizing victims, but it’s also consistent with Romney’s strategy of “othering” Obama in similar ways, often using coded concepts of shared culture to exploit or create unease about Obama’s race. Just a few days earlier, one of Romney’s aides made the mistake of revealing a bit too much of this strategy when he told a member of the British press, “We are part of an Anglo-Saxon heritage,” going on to note that the White House “didn’t fully appreciate the shared history we have.” It wasn’t hard to read between the lines. America’s first black president, the son of a Kenyan father, doesn’t understand our culture.

Taken in isolation, these comments could easily be dismissed as the blunders of a poorly managed campaign or a clumsy candidate. But against the backdrop of Republicans’ tireless attempts to undermine Obama’s legitimacy — not to mention Romney’s ongoing rhetorical efforts to portray him as “foreign” — what we find instead is that they are part of a  broader effort to exoticize the president so that his race can remain an issue throughout the 2012 election season.

Even before he took office, Obama was forced to prove his “American-ness” to a rabid group of “birthers” who, even when confronted with irrefutable evidence, found it easier to believe Obama was at the center of a major conspiracy to violate the Constitution than accept that he was the natural-born citizen he claimed to be. Sadly, this movement still has high-profile adherents, including immigrant hunter Joe Arpaio and Chapter 11 guru Donald Trump, the latter of whom has vowed to make Obama’s birth a central element in the election. Rather than distance himself from Trump, Romney has recently embraced him, in the process giving a proverbial wink to attacks that center on Obama’s fundamental right to hold office.

It is perhaps the basic sense that Obama has no right to be the American president that has fueled the surprising, perhaps unprecedented, disrespect he has been forced to endure.  We all remember when Republican Rep. Joe Wilson shouted “You lie” during an Obama speech to Congress; when right-wing Supreme Court Justice Samuel Alito shook his head like a petulant child during the following year’s State of the Union; when Speaker John Boehner refused to allow the president to address a joint session of Congress in 2011; and when Jan Brewer wagged her fingers in the president’s face earlier this year. Although he has governed as a centrist — to the chagrin of many progressives — Obama has drawn the vitriol of a radical. It is not uncommon to hear Republican politicians decry him as a traitor; it’s almost expected at right-wing campaign events. In fact, at a May 2012 Romney event in Ohio, a woman in the crowd said of Obama, “I do believe he should be tried for treason.” Mitt didn’t object. At all.

Perhaps one of the reasons why words like “treason” seem to come so easily for some Republicans is that many are convinced, facts be damned, that Obama is a Muslim and therefore some kind of enemy to our Judeo-Christian culture. According to a recent poll, more than a third (34 percent) of conservative Republicans now believe Obama is a Muslim; that’s a dramatic increase over 2008, when only 16 percent were stupid enough to think so.

While Mitt Romney has not fed this misconception directly, his Obama-isn’t-a-real-American rhetoric can’t be helping.  As David Corn points out, one of Romney’s favorite lines — which he’s hammered home repeatedly on the stump — is that Obama “doesn’t understand America.” During a New Hampshire event earlier this year, Romney repeated this claim, and then went on to make one of his oft-invoked threats: that Obama will turn the U.S. into a “European-style welfare state.” Perhaps it’s just a coincidence that Romney likes to spice up the rhetoric of “otherness” with a dash of “welfare” here and there, but a cynical observer might find something more racially sinister at work.

There was certainly something insidious in the recent comments made by John Sununu, one of Romney’s advisers, last month. First he made an appearance on Fox News and said that Obama “has no idea how the American system functions” because “he spent his early years in Hawaii smoking something [and] spent the next set of years in Indonesia.” Remind us of the black president’s marijuana use? Check. Make him sound exotic and foreign? Check. But the real beauty was in a Romney campaign conference call later on, during which he said, “I wish this president would learn how to be an American.” He did try to wiggle out of that one afterward, but given his bombast throughout the day, it’s pretty clear he was saying what he meant.

And, as Rachel Maddow recently demonstrated, Romney has been joining in with his new favorite word, “foreign,” to describe Obama. As Maddow notes, while John McCain, the previous Republican candidate, has consistently taken the high ground against tactics like this, Romney has made a beeline for the gutter. “This idea of criticizing and attacking success, of demonizing those in all walks of life who have been successful,” he said at an Ohio event last month, “is something which is so foreign to us, we simply can’t understand it.” This line, or some permutation of it, has been popping up a lot in Romney’s speeches. He accuses Obama of “demonizing” the successful, yet he seems to be demonizing anyone who doesn’t fit his narrow view of what makes us American.

Recent polls show that Romney’s tactic isn’t working, particularly in crucial swing states. With just a few months to go, it remains to be seen how much lower he will go to win the election. In May of this year, the New York Times exposed an advertising plan commissioned by a Republican super PAC that proposed attacking Obama on Jeremiah Wright, again.  Romney repudiated the plan at the time, but with the edge going to Obama, we’ll see if Wright’s name reenters the fray.

Of course, if it does, then the door will be open for attacks on a candidate’s religious affiliations, and  whatever damage Jeremiah Wright can do, the Mormon Church — with its reputation for secrecy, its legacy of bigotry and its own set of “foreign” cultural practices — can do more. Surely that’s a road Mitt Romney doesn’t want to go down.

Then again, who knows? This is the same guy whose sense of what’s culturally right is so strong that it compels him to do what’s morally wrong. Standing in front of a group of wealthy Israeli donors and praising their cultural superiority was a surprisingly inept bit of politics, but the underlying message of bigotry is perfectly consistent with his American narrative as well. He didn’t say the Palestinians were inferior, just as he never says Obama’s race makes him un-American. He doesn’t have to.