The "Parks and Rec" star tells Salon her character needs to change, and how "The Graduate" inspired her new comedy 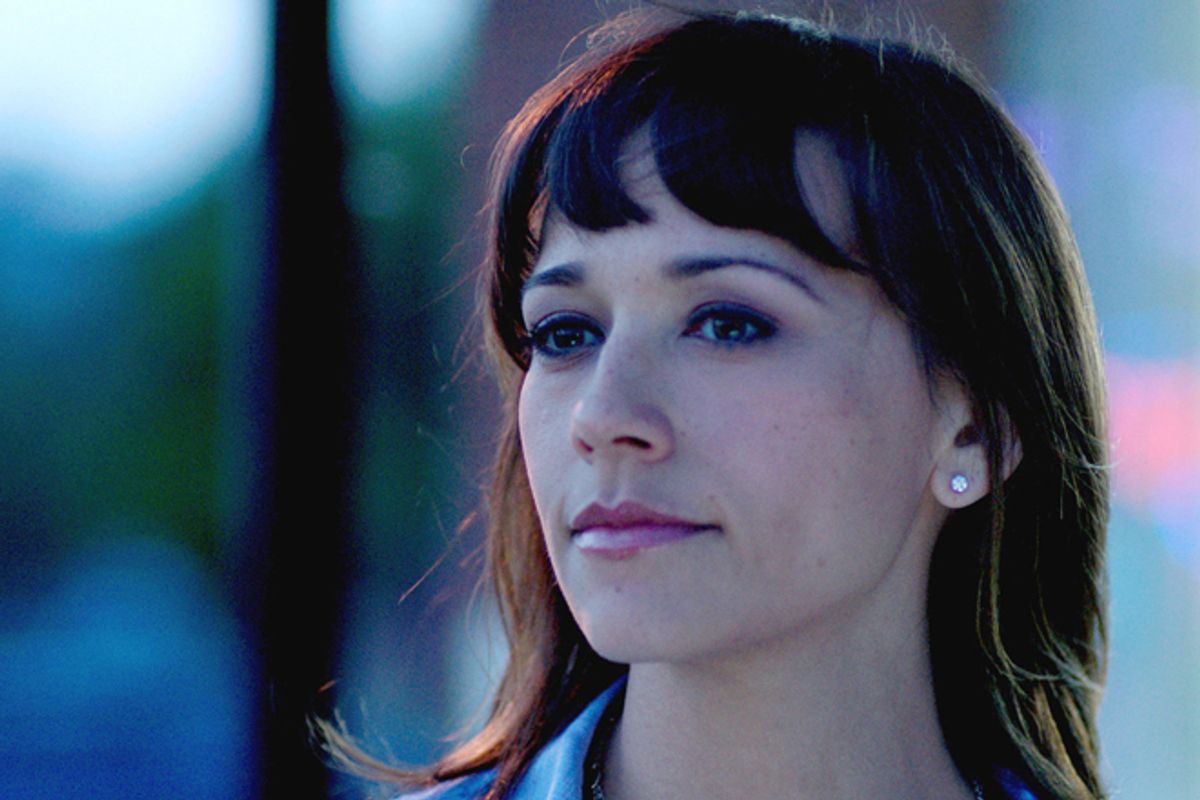 Rashida Jones, best known for her role as Ann Perkins on "Parks and Recreation, co-wrote and co-stars in this weekend's "Celeste and Jesse Forever," a romantic comedy about what happens not before, but after a breakup. Working with her writing partner Will McCormack, Jones put together a screenplay about a long-term married couple who have decided to divorce, but continue to hang out every day. After their breakup becomes more final, Jesse (played by Andy Samberg) moves on in a surprising hurry, leaving Jones' Celeste, a likable if bossy personality, to figure her life out.

Jones talked to Salon about romantic comedies, the worst parts of her personality, and "Parks and Rec's" Ann Perkins problem.

This movie doesn’t have a typical romantic comedy ending. Was that always the plan, or did you come to it in the writing?

The ending came first. That was the thing we knew, that she was going to go through it on her own. When a movie ends and people, like, find each other and make that big romantic monologue and then they kiss, I just don't think that’s realistic. The only truthful version of that I've ever seen is in “The Graduate,” when they're sitting on the bus and they’re like “Holy shit, what did we do?” I asked Mike Nichols, who is a friend of my dad’s, about that ending and he said they didn't know they were filming anymore; they were kind of looking around like, "Are we filming, what's happening?" We wanted to tell a story that felt like a dramatic approximation of what it feels like to have a broken heart and nurse a broken heart. And I think part of that is not running away from it and not being saved from it, it’s just about the pain, sitting in the pain of it.

Was nursing a broken heart the idea you started with, that you wanted to explore?

I had this idea about a girl who was kind of holding on to a relationship and holding on to a guy who was still in love with her and she was no longer in love with him. She took him for granted, she was being selfish, and she was a very specific type of woman. It was a movie about timing, about the timing of this relationship, and realizing too late that you’re taking somebody for granted. I presented it to Will [McCormack, co-writer] and he had a lot to say about it, and so we were like, let's sit down and write until we're done, until we have something. And if it's shitty we'll use it as firewood, and if it's not then maybe we can get some actor friends involved and make it better.

You said in an earlier interview that you wanted this to be like ‘80s movies, as sad as it was funny.

I feel like ‘90s and early 2000s might have been a slightly lower point for romantic comedies. They got real narrow. It was like the same story over and over again. And by the way, any time a romantic comedy is on TV, no matter how bad it is, I’m watching it, I’m going to watch it. But there was a time when you didn't have to choose if it was funny or sad, you could do both, like with “When Harry Met Sally,” “Broadcast News,” “Annie Hall.”

Totally. But why not aim high? Why not try to emulate the best?

Sure, though those films are not particularly emblematic of the ‘80s, so much as quality

I only say ‘80s because I just feel like business-wise they've stopped making those movies because they don't feel like there's an audience for it. They started going with the straight-up fluffy entertainment. But I do think there's still an audience for a different kind of romantic comedy because you look at what a huge hit “500 Days of Summer” was -- and that movie doesn't have a happy ending. It's about loving somebody and letting go. I think that there's an appetite for it, maybe not as many people as for the fluff, but there's an appetite.

Do you see this movie as part of the recent trend of films about more complicated, raunchy female characters, alongside things like “Bridesmaids” and “Girls”?

It is a thing that is happening, but I hope it's not just a trend. Because women are going to continue to get more complex and interesting and evolved, so I hope the representation of the whole spectrum of women will continue.

You’ve said Celeste was based on the worst parts of your personality.

What are those worst parts?

In the movie, Celeste calls out a guy who cuts the Starbucks line. Would you do that?

I don't know if I'd call out somebody cutting in line, but I've definitely wanted to. In the movie it's just a tell. Like you get it, really fast, that she feels entitled, that she feels like the master adjudicator in the world.

I think it's changing.

That's such a diplomatic answer.

Do you worry we care too much about frivolous things?

No. I worry that we don't care enough about anything because we have so much information rushing towards us that we don't even have the time to process, to decide what's right, decide what's wrong. I mean that's what all the studies say about the brain: Because there's so much information now and we don't have the same filters, we get numb. That's what I'm concerned about, being numb.

What do you hope happens with “Celeste and Jesse"?

I know this sounds really corny but already I feel like it's been successful for me. In talking to people after screenings, it has had a personal impact on people. They feel like their lives were reflected and somehow Will and I managed to tap into something that felt fresh for people and that felt emotional, and that's like … I don’t even know how you do that. It would be nice to get a couple of good reviews too, there's nothing wrong with that.

Are you and Will working on something else?

We wrote an adaptation of a comic book that I wrote, but it’s up to Universal if they want to make it or not. And then we're going to start brainstorming and let it come in natural time. "Celeste and Jesse” was like having a super-traumatic first birth, emergency C-section, and we're just going to take our time this time, let the vag heal, let the stomach heal.

I’m going to jump subjects and ask you about “Parks and Recreation.” When do you start filming again?

Next Monday we start. I'm so excited. I feel like I don't even know what happens in between seasons but we all have this thing where we all feel like it's Rumspringa every year. We go off and we fuck up and things get fucked up and we just need to download, get back into school and hang out.

What do you think about the Ann and Tom romance on "Parks and Rec"?

I think for comic effect it was really fun. [Showrunner] Mike Schur’s justification was, they're in a small town and it's incestuous, and he's totally right about that. I think the comic value of it, if it were extended too long, you'd be like, wellllll, because the rest of the show's so grounded in some form of reality. But also, the people who are together are together, and they didn’t want to link me up with somebody and have me done, because that's not fun from a story perspective. So I'm the town slut. It’s totally fine. I'm fine with it.

I don’t know how much you read about “Parks” on the Internet ...

Sometimes I do, sometimes I don't. I haven’t had time lately, and I really mean that, but I have read stuff.

Well, there have been some pieces about Ann, and Ann’s position in the “Parks” firmament, and how she’s not fully integrated into the show. Do you have thoughts about that?

I have thoughts and I have feelings about that. I think as the straight character that's just part of the burden. The show needs to be tethered, and I know [showrunner Mike Schur] has spoken out about this, and that's part of my position. But he's also acknowledged, and I acknowledge, the character could probably deal with a little bit of development. I feel like the show is so damn near perfect that there was going to be something that was weak about it, you know? And to write story lines for nine people like this is impossible. And the fact that it's such a great show, I still will take a minimal modicum of partial credit for that. And also none of the people I work with make me feel like I'm any less a member of the team than not. My own psychological thing is that I'm better at my job when I'm praised. I work with positive reinforcement. And if I feel in any way not like a strong link then I get really demoralized, so I've had to really lean on my castmates to be like, “you're totally part of the show.”

Oh, I think that’s almost taking it too hard.

I feel like it's kind of like how I'm the sixth out of seven children and I was never taught to ride a bike because by the time they got to six they were like, “What?” It's just hard to keep track of that many kids. And on “Parks” I've had some really fun, cool stuff to do. My favorite stuff is when Ann's super-confused and a little bit crazy, and hopefully, Ann is primed to have a major moment. We've talked about it and I'm sure we're primed. So I feel like I'm in a good position because the expectations are low and I have a great job and I love everybody I work with, and if anything funny or good happens, it'll be great for everyone.