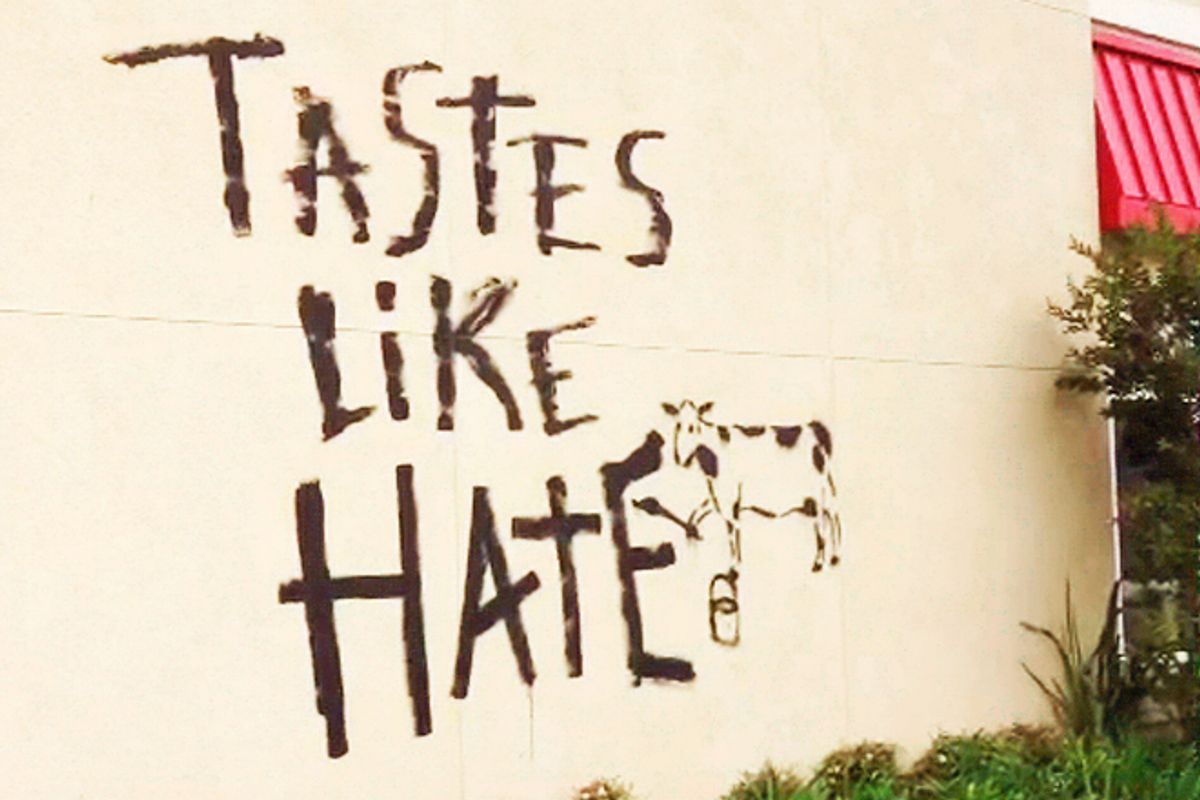 There are so many reasons to both uncontrollably laugh at and be intensely disgusted by last week's brouhaha over Chick-fil-A. With droves of American eaters rewarding the company with record sales for its CEO's public rant against gay marriage, you can let out that same chuckle you release when you watch Coen brothers characters -- you guffaw at the paranoia, the sheer stupidity and the irrational animus of a bewildered herd. You can also feel that intestinal-tract pang of nausea you experience during food poisoning -- the feeling that no matter what you look at to try to calm your gut, the image is going to make you simultaneously defecate and puke all over yourself.

This laugh/retch impulse has become an understandable reaction in a country obsessed with the Culture War. But, then, as much as the back-and-forth over Chick-fil-A CEO Dan Cathy's declaration seems like just a run-of-the-mill skirmish in that war, it's not. It is a genuinely iconic grotesquerie, and not just because it involves a company that has faced repeated accusations of illegal discrimination. In five distinct ways, the episode sums up so much of what's wrong with American society today.

1. A politically disengaged nation facing massive problems only gets active when fast food mixes with homophobia.

With climate change intensifying weather cataclysms, with the economy still on the verge of collapse and with foreign conflicts showing no sign of slowing down, America faces emergencies of no less than biblical proportions. Literally, biblical -- wars, drought, famine and crushing poverty, to name a few. And yet, in the face of this, there's more often than not total apathy and rampant disdain for the mere idea of political activism.

Except, of course, when it comes to the bizarre nexus of fast food and homophobia.

Then and only then, it seems, do the masses rise up in solidarity to miraculously transform stuffing one's face with processed junk food into a proud way of opposing equal rights for gay people. Then and only then do people seem willing to drive out of their way and stand in long lines -- all to somehow transform gluttonous gorging into a form of anti-gay protest.

2. During an obesity crisis, gorging oneself on junk food becomes synonymous with civic engagement.

Speaking of that transformation, let's remember that America is on the verge of bankruptcy, thanks in large part to healthcare spending. A big driver of that profligate spending is the twin obesity and dietary crises. The former costs us about $190 billion a year, and will soon cost even more if we don't get the problem under control. Though the latter's costs are hard to estimate because food-related disease is so widespread, it's safe to say they are large.

One of the drivers of these two crises is the relatively recent (in human history terms) rise of processed junk food, and more specifically, the prevalence of that food in America's sprawling fast food industry (this is especially true among children). So when consuming more fast food is suddenly turned into a form of proud civic engagement and "First Amendment" protest -- as it did last week with "Chick-fil-A Appreciation Day" -- it's an apocalyptic sign that we're not getting any closer to addressing the crisis. In fact, it's a sign that we're intent on making that crisis worse in the future.

3. During an epic drought, many Americans are happy to waste water if it means amplifying their homophobia.

As I noted in my most recent newspaper column, this nation is facing one of the worst droughts in its history, threatening everything from the food supply to the energy system. This is nothing short of a national security crisis within our midst. But you wouldn't know it from last week, as thousands of Americans were more than happy to eat more of Chick-fil-A's water-intensive meat than ever -- all to publicly amplify their homophobia.

Maybe those supporting the Chick-fil-A CEO's anti-gay rant had no idea that when they were cheerily stuffing their faces full of processed chicken, they were eating a substance that, according to Cornell researchers, "requires, on average, about 100 times more water" than a pound of equitable vegetable protein. But if they didn't know those facts, that unto itself would be a telling commentary on a nation that is utterly ignorant of the basic threats to its security. Alternately, if they did know those facts, it would be an equally disturbing commentary on a nation whose hatred of gay people has become so pathological that it is willing to risk its water supplies to make a homophobic point.

4. Total ignorance of the First Amendment and the concept of "free speech."

Both those railing on the fast food chain and those supporting Chick-fil-A succinctly proved that many Americans either have absolutely no understanding of or no respect for the most basic tenets of the First Amendment and the concept of free speech.

As Salon's Glenn Greenwald showed, the pro-equal rights politicians seeking to ban Chick-fil-A from doing business in their communities were thuggishly violating both the spirit and the letter of the Constitution. According to the First Amendment, a government cannot "abridge the freedom of speech" -- which means in practice, it cannot ban a company from doing business as retribution for statements made by a company's executives, no matter how abhorrent those statements are. In their (understandable) disgust with Dan Cathy's statements, the elected officials seeking to ban Chick-fil-A from their municipalities exposed themselves as wholly uninformed about -- or disrespectful of -- this concept. They don't seem to understand that under the First Amendment freedom of speech includes the freedom to say things politicians don't like, and to say them without the fear of governmental retribution.

At the same time, those rubes insinuating that a consumer backlash or threat of boycotts are an assault on Dan Cathy's liberties are just as ignorant of free speech as their ideological opponents. This was the same inane argument made by attention-seeking rubes when advertisers began dropping their sponsorship of "The Rush Limbaugh Show" -- and it's just as idiotic today as it was back then.

Freedom of speech doesn't mean the freedom to say whatever you want and not face criticism or legal non-governmental consequences (like, say, protests and boycotts). Cathy and Limbaugh and anyone else have every right to spew their hateful vitriol, just as their supporters have every right to pig out on Chick-fil-A junk food or patronize specific sponsors in support of that hate -- just as other Americans have every right to say they are all cretins and to therefore avoid supporting the restaurant and/or those sponsors with their money.

That these most basic liberties are no longer understood by large swaths of the population shows how divorced we've become from our own -- supposedly vaunted -- Constitution.

After President Obama publicly (and belatedly) endorsed the idea that LGBT people should have equal rights under our marriage laws, I wrote two columns -- one arguing that it's absurd for Republicans to say we can't deal with social and economic issues at the same time; the other pointing out that America often prioritizes fights over social issues like gay marriage over battles about economic justice. Nothing exemplifies the latter point more than the Chick-fil-A hullaballoo.

Cathy's bigoted comments were certainly awful -- and it's great that more Americans who support equality are going to "vote with their pocketbooks" by not spending money at Chick-fil-A. But at the very same time this controversy garnered 24/7 media attention, generated mass protests on both sides, and elicited responses from the nation's top political leaders, another national fast food chain, Chipotle, was quietly refusing to sign a covenant dealing with basic human rights -- a covenant so minimal that other major fast food companies have already signed on. Other than in Good magazine, this immoral decision was wholly ignored by the very media and political system promoting the Chick-fil-A spat.

The result is that many Americans swearing never to eat Chick-fil-A will replace the chicken sandwich with a Chipotle burrito -- either not knowing or not caring what they are thus supporting.