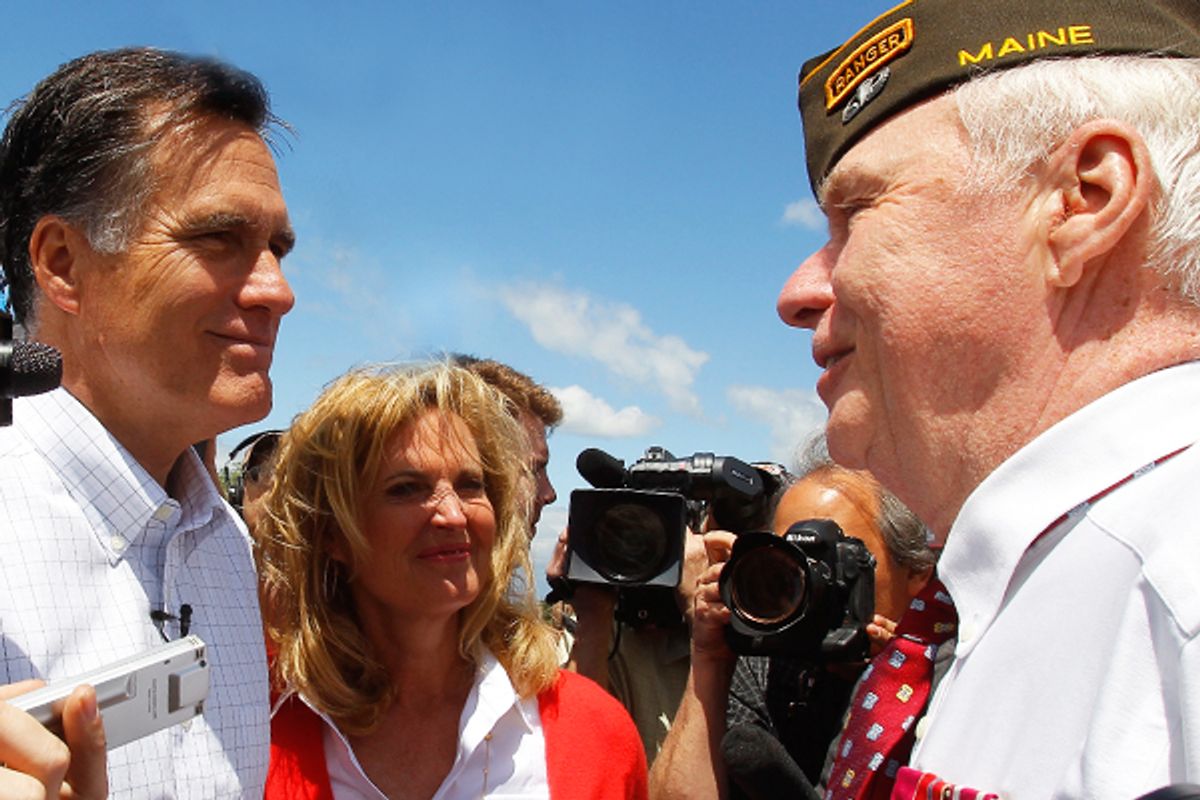 Happy birthday, Voting Rights Act! Signed by President Lyndon Johnson on Aug. 6, 1965, the law is now 47 years young and still needs our support and protection. The GOP keeps finding sneakier ways to disenfranchise those Americans who might be inclined to vote for Democrats. This year alone, 38 states pondered legislation designed to impede voting access; according to Ari Berman in Rolling Stone, a dozen states have approved new barriers to voting.

So it was pretty slick of Mitt Romney to accuse President Obama of being the vote suppresser – and of suppressing the military vote, to boot. Just getting back from vacation, I couldn't figure out the basis for Romney's charge that Obama wants to deprive Ohio's military service people of their voting rights. I thought I still had vacation-brain; I had to be missing something. The Justice Department is trying to block an Ohio law that limits early voting. The "reform" by the state's Republican-dominated Legislature would let only military voters cast ballots in the three days before an election; the Justice Department would let all eligible Ohioans do so. Romney called that an "outrage" and promised "to protect the voting rights of our military, not undermine them." But how would the DOJ lawsuit hurt members of the military?

It wouldn't, of course. Unless you accept the logic of the Republican resentment machine, in which efforts to extend rights to more people are reliably depicted as taking rights away from people who have them. As Kentucky Sen. Rand Paul helpfully explained during his 2010 campaign, the Civil Rights Act infringed on the rights of property owners to discriminate. Anti-discrimination laws protecting non-whites, women or gays thus become "special protection." And as we all know, gay marriage is an attack on straight marriage.

So trying to maintain Ohio's 2005 early-voting law, utilized by 93,000 voters in 2008, rather than just restricting early voting to the military (who do, by the way, tend to vote Republican), is easily depicted as an attack on military voters, using GOP resentment-machine logic. This time, though, even the mainstream media seemed able to parse the GOP lies. A quick scan of Ohio dailies showed that most quickly explained that the Justice Department's move wouldn't take away any rights from service members.

It's true that some military and veterans' groups gave ballast to the Romney lie by either questioning or outright opposing the Justice Department's efforts. A kind interpretation would hold that the groups were concerned that military members not lose rights under any Ohio deal with the DOJ. (A less kind interpretation would note that some military groups, like the Catholic bishops, have become an unregistered arm of the GOP.) As Vote Vets' leader Jon Soltz notes, such groups seemed unconcerned by the fact that Ohio's new law restricts the voting rights of 900,000 veterans in Ohio, who could vote early under the old law but not under the new one, which only applies to active service members. Why do Republicans hate veterans?

And some military law experts side with the Justice Department, opposing efforts to provide extra voting rights for service members (apart from laws protecting their right to vote absentee). "The idea that service members are fuller citizens than the rest of America is a disaster for military professionalism," University of Florida law professor and former Air Force officer Diane Mazur told BuzzFeed's Chris Geidner. "Making reckless allegations that civilians are trying to disenfranchise service members is one of the most destructive things you can do to the military."

Of course, that destructive tension has its (dishonest) roots in GOP claims that Al Gore was fighting not to count the absentee ballots cast by Florida service members in 2000. There really are no new ideas in the GOP playbook.

And so, on the anniversary of LBJ signing the Voting Rights Act, let's take a moment to look at the list of GOP voting-access restrictions since 2008. Ari Berman runs them down (read his whole piece):

Kansas and Alabama now require would-be voters to provide proof of citizenship before registering. Florida and Texas made it harder for groups like the League of Women Voters to register new voters. Maine repealed Election Day voter registration, which had been on the books since 1973. Five states – Florida, Georgia, Ohio, Tennessee and West Virginia – cut short their early voting periods. Florida and Iowa barred all ex-felons from the polls, disenfranchising thousands of previously eligible voters. And six states controlled by Republican governors and legislatures – Alabama, Kansas, South Carolina, Tennessee, Texas and Wisconsin – will require voters to produce a government-issued ID before casting ballots. More than 10 percent of U.S. citizens lack such identification, and the numbers are even higher among constituencies that traditionally lean Democratic – including 18 percent of young voters and 25 percent of African-Americans.

And remember what right-wing talker Neal Boortz said in 2010: "What a grave mistake we made when we gave the parasite class access to the ballot boxes." Of course, most of us, even most white men, used to belong to what was considered the parasite class; there wasn't universal suffrage even for white men before 1830. This is an old debate, but Romney's military-voters lie is a genuinely shameful new twist.