"Newsroom" pulls on your heartstrings, but so do Hallmark cards 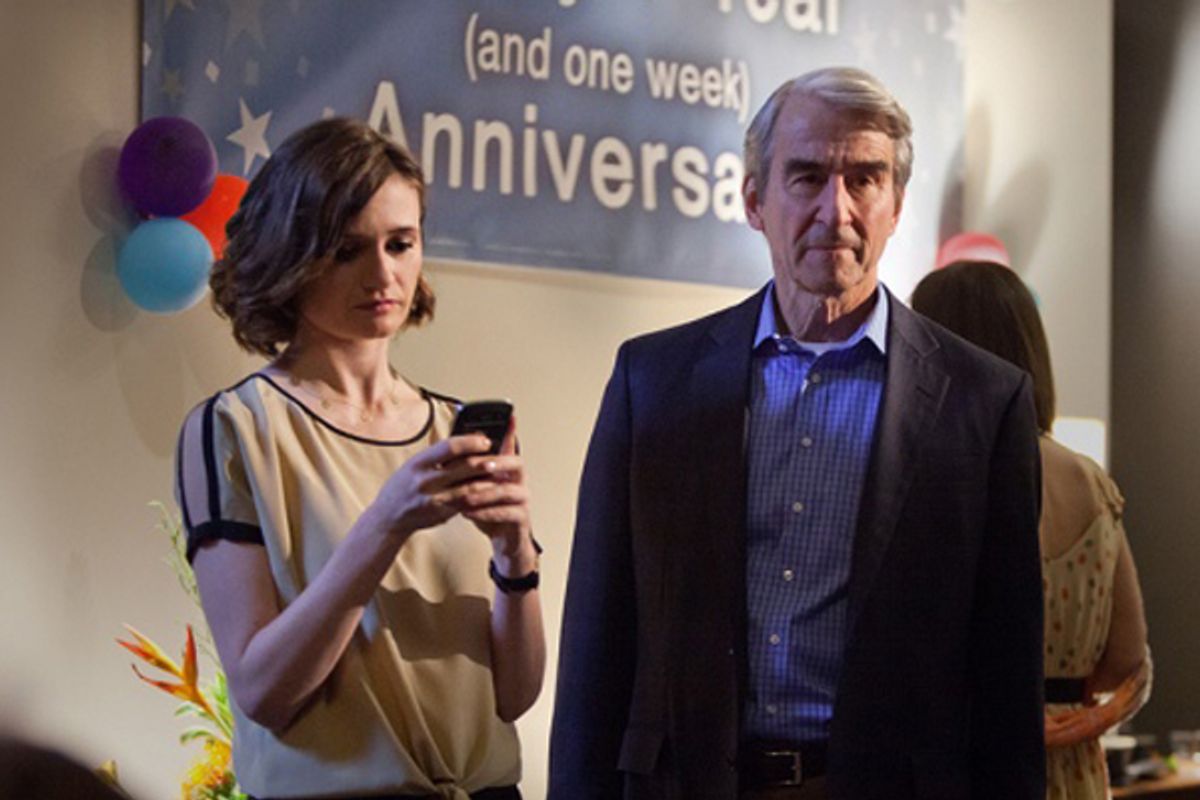 Emily Mortimer and Sam Waterston in "The Newsroom"
--

There was so much good stuff on the TV last night — Olympic heartbreaks from McKayla Maroney and Oscar Pistorius, a triumph from Usain Bolt, coming at you at the inexplicably late hour of 11:30 p.m. EDT, and another annihilating episode of “Breaking Bad”— and yet, here I am, about to talk about “Newsroom” again. Last night’s installment didn’t plumb the depths of past episodes (though it did pretty much complete the character assassination of Maggie, who is now treating her best friend and the guy she wishes were her boyfriend with reckless emotional cruelty), but it did contain another scene that I have come to think of as the quintessential “Newsroom” scene, the one that proudly pulls on your heartstrings and all but shoves a piece of onion down your tear ducts, as if badgering an audience into tears was an impressive accomplishment, and not something that Hallmark cards, commercials and Kate Hudson movies can also do. Some comedies go in for cheap laughs; “Newsroom” goes in for cheap tears.

The prime example of such a scene came in “Newsroom’s” epically risible fourth episode, when the Gabrielle Giffords shooting got scored to a loop of Coldplay’s “Fix You.” That sequence was too cheesy, too self-important (the meaningful part of the Giffords shooting was, obviously, how this crew of journalists would rise to the occasion!), and yet, at some point, my face was wet.  Most of the time, one’s heart and mind can be relied upon to act in concert — my brain watches something it knows is silly and manipulative, almost bordering on parody, and my heart has the decency to agree — but this heart-mind consensus can break down, especially when traumatic real-life events are involved. Aaron Sorkin took a horrendous event, set it to sounds of Chris Martin’s caterwauling, and plugged in some vaguely life-affirming dialogue. With such ingredients, tear-jerking really is little more than a recipe.

In Week 5, “Newsroom” pulled off another cheap tears scene by relying not on a real-life event, but on the intrinsic teariness of “Rudy,”  the movie — as "Newsroom" itself noted — most likely to make grown men cry. In the episode’s final scene, the entire staff of News Night filed into Will’s office and left a check on his desk, a reference to the scene in “Rudy” where the players do the same with their jerseys, so Rudy can play in his very last game. As with the Giffords segment it barely mattered how “Newsroom” executed this scene. Given the ingredients, some people would cry.

Last night’s episode was about the announcement of Osama bin Laden's death. News producer Don and on-air talent Eliot and Sloane were stuck on the tarmac in an airplane while the news was breaking. An impatient Don got up to calm the plane’s passengers, who were getting some information on their phones, but only enough to be anxious. (Please forget that by the time Don was doing the soothing, we had already been told that the death of Osama bin Laden was all over Twitter and had been confirmed by the New York Times.) As Don took charge, a surly flight attendant brought out the plane’s captains to get him to sit back down. Don started to sass them, but then noticing the stripes on their shoulders, snapped to attention: He stood up straighter, the music swelled, and he very formally, respectfully informed the captains — former soldiers who definitely deserved this information more than the other passengers on the plane, many of whom could also have been veterans, but, whatever — that Osama bin Laden had been killed.

It was all so much phony bologna, and yet there was a tear inching down my face. (In my defense, the Olympics have my tear ducts on a hair trigger.) Before I could even wipe it away I was groaning at myself: What an easy mark I am. It was such a dirty, lame, unearned tear, the crying equivalent of laughing at a bad fart joke. I would say I should know better, but I did know better— my eyes just weren't cooperating. They better start before Aaron Sorkin tries to make me cry about Casey Anthony.