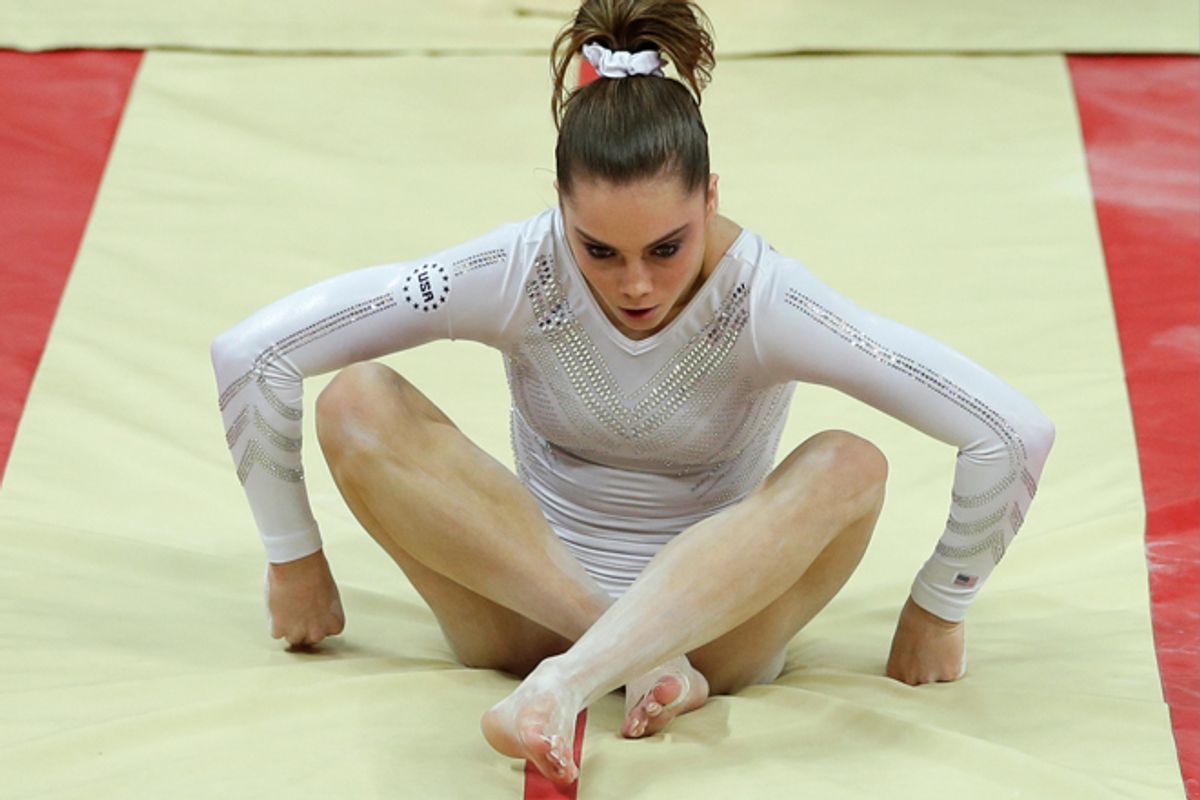 Every Olympics is defined by certain once-in-a-lifetime, did-you-see-that? moments. Gabby Douglas suspended in midair above the balance beam in her gold medal-winning performance. Usain Bolt striking his celebratory lightning flash pose after his near-supernatural victory in the 100-meter. And then there are the other kind of moments. A runner bringing up the rear in dead last place. A young gymnast flat on her rear.

But the very different defeats Sunday of McKayla Maroney and Oscar Pistorius were, in their own ways, among the brightest and most inspiring events of these or any others. They were the latest chapters in the narratives of two uniquely brilliant athletes, moments that will forever define their careers – and stand out as brilliant examples of truly stunning achievement.

That the man who came in last in the 400 meters, South Africa's Oscar Pistorius, was even in the race at all was a major victory. The first double amputee to compete in track and field, he's been a source of admiration – and controversy – since he began competing. He was born without fibula in both legs and had his legs amputated below the knees before he was a year old. Because he runs on springy Cheetah Flex-Foot prosthetics, he was initially banned from the 2008 Olympics on the grounds they would give him an unfair advantage. Pistorius took his quest to court and won a reversal, but wound up not qualifying for Beijing. He competed in the Paralympics there and won three gold medals.

After making the South African team at the London Olympics, the 25-year-old known as Blade Runner showed unprecedented promise. On Saturday, he placed second in the 400-meter heat with a blazing time of 45.44 seconds. But in Sunday's trial he fared considerably less well, coming in last and bringing his hopes of moving on to a sudden stop. Yet the entirety of his performance was a stunning example of grit and power – made all the more intense by what happened when it was over. It was then that the victor and favorite to grab the gold, Grenada's Kirani James, made his way to Pistorius. The two then hugged, and, in an Olympic first, exchanged bibs.

It was a display of the best aspect of the competitive spirit -- of a mutual acknowledgment of respect and admiration. Pistorius, who called running in the Olympics a "mind-blowing" "dream come true," told NBC afterward, "As soon as we crossed the finish line, we're friends. It was very kind of him." And James, returning the compliment, declared that "Oscar is someone special, especially in our event. It's a memorable moment for me to be out here performing with him." Pistorius will compete later this week in the relay, and then go on to the Paralympic games. At those, he has every chance in the world of taking home more gold. From there, he already says that, "In 2016, I'll probably be at my peak in Rio. I'm looking forward to that more than anything." But when he came in last on Sunday, he showed something else to the world. He showed what it means to go out and give your all and be joyful in the effort. That run, that exchange of bibs, was an act of love between Pistorius and everyone rooting for him. And it was a display of what's possible when you define yourself not by what you lack but by what you dream.

It was a story that played out in a different fashion elsewhere, in the performance of gymnast McKayla Maroney. If there was anything like a sure thing in these games, it would have been the 2011 world vaulting champion coming home with a gold medal around her neck. NBC's coverage of the competition Sunday made her victory all but a fait accompli, each other performance held against the standard of what Maroney, the penultimate vaulter, would do when it was her turn. Indeed, her first vault was near perfection. And then, for her finish, the vault that would bring home gold, she landed flat on her posterior.

It was a sight that produced gasps both in London and around television sets across the globe. How could Maroney, for whom the phrase "nailed it" seems to have been invented, have crashed? It was so unbelievable Maroney herself seemed uncomprehending. A look of pure puzzlement flashed across her face before she got up, lifted her arms in the air, and walked off to the sidelines. Her score for her first attempt was so good she still managed to find herself in first place, but it was the final gymnast, Romanian Sandra Izbasa, who executed the best performance and took the gold.

It was a shocking upset, but it was also, somehow, par for the course. There is no such thing as a sure thing in life, even for a heavily favored champ. Maroney herself said afterward, "I didn’t deserve to win gold if I landed on my butt." She then added, "I was still happy with a silver, but it's still just sad."

There are only a tiny handful of individuals in the history of the planet who can do what Maroney does on the vault. Yet there is not one among us who doesn't know the feeling of landing on one's metaphoric or literal ass, or the mortification of failure. But as the great Vince Lombardi said, "It's not whether you get knocked down. It's whether you get up." And what Maroney did, with supreme finesse, was get up. She bore it with dignity. She acknowledged the pain of loss and accepted the still pretty damn remarkable thing she'd earned instead.

Maroney didn't ever want to be an example of how to be strong in defeat, but then, who among us cherishes that particular fantasy? Yet that's what she got. Everyone wants to be the best. Everyone wants to be first. But what happens when we're not is what defines us, just as deeply as our triumphs. In their defeats, both Pistorius and Maroney showed the world how to survive failure. How to accept a hug when you were going for a medal. How to get up when you fall down. It wasn't victory. But it was graceful as hell.