Over the fiscal cliff we go 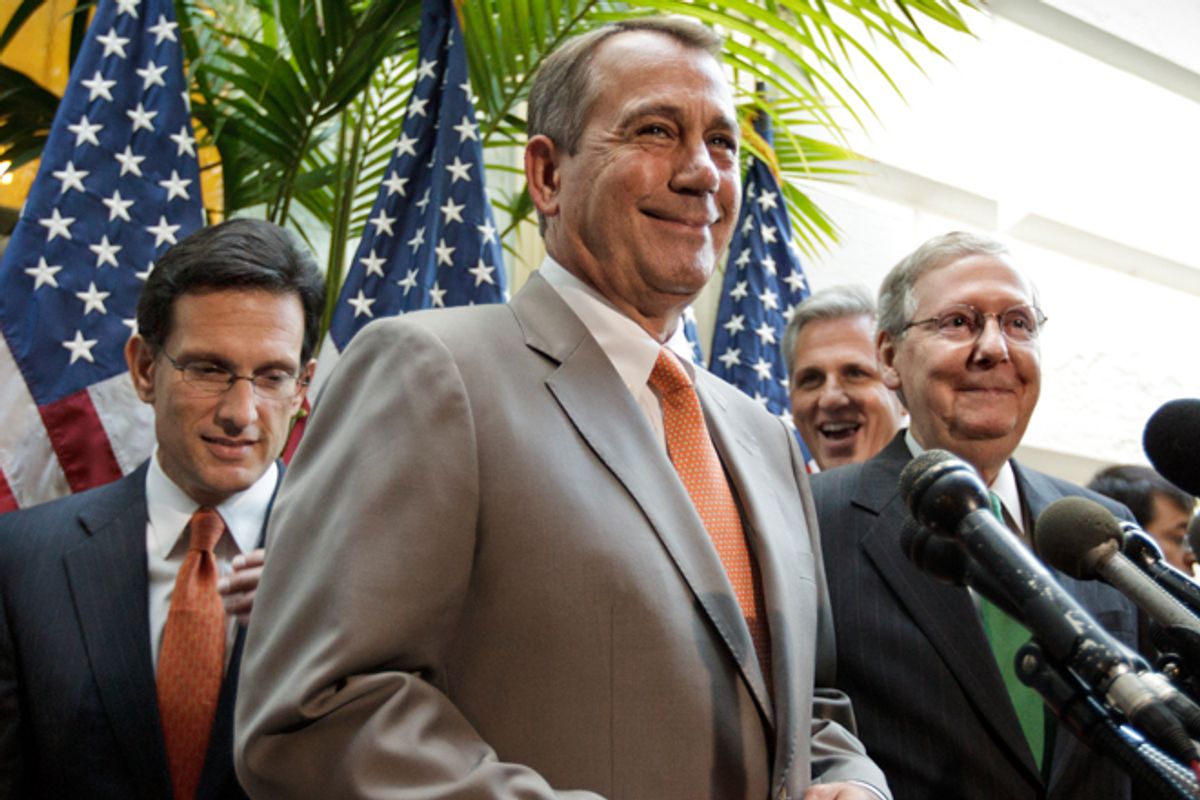 From inauguration day onward, a favorite GOP go-to attack on Obama has been that his tax, spending and regulatory policy proposals were causing "uncertainty" about the future. This uncertainty about the shape of things to come was supposedly impelling business executives towards excessive caution, dampening their enthusiasm for hiring and investment.

This criticism, especially in the early years of Obama's administration, always seemed precipitate. What could possibly cause more uncertainty about the future than a massive economic crash responsible for half a million layoffs a month during the worst of the crisis? Wouldn't a decision not to pass new regulations on the banking sector after a systemic crash seem more scary than the possibility that some of the new rules might have costs? But the attack was still effective because it contains a nugget of truth. There seems little question that the debt ceiling showdown during the summer of 2011 -- an incident entirely created by House Republicans -- did indeed cause economically damaging uncertainty about the future.

Cue the déjà vu machine: On Monday, the New York Times provided new, distressing proof of the destabilizing impact of "uncertainty." Look out, everyone, we're about to tumble over the "fiscal cliff"!

A rising number of manufacturers are canceling new investments and putting off new hires because they fear paralysis in Washington will force hundreds of billions in tax increases and budget cuts in January, undermining economic growth in the coming months....

Hubbell, a maker of electrical products, has canceled several million dollars’ worth of equipment orders and delayed long-planned factory upgrades in the last few months, said Timothy H. Powers, the company’s chief executive. It has also held off hiring workers for about 100 positions that would otherwise have been filled, he said.

“The fiscal cliff is the primary driver of uncertainty, and a person in my position is going to make a decision to postpone hiring and investments,” Mr. Powers said. “We can see it in our order patterns, and customers are delaying. We don’t have to get to the edge of the cliff before the damage is done.”

So who gets the blame this time around? A cynical person would note that an economic downturn, right now, increases the GOP's chances of moving into the White House. So from a realpolitik point of view, it's hard to see a downside for Republicans. They can claim they're acting on principle while executing a hugely advantageous strategic maneuver.

Judging by the Times' reporting, however, business leaders are feeling extra apprehension this time around because Democrats are acting like Republicans!

Business leaders say the latest fight feels different. Last summer, during a confrontation over raising the debt limit that risked a government shutdown, Mr. Powers of Hubbell did not alter course at his company, as he is doing now. “We never expected the government to shut down,” he said. “This bluff carries much more weight.”

So why would Democrats willingly fling themselves over a fiscal cliff that threatens their own party more than the opposition? The answer to that requires a close look at what this struggle is really about. If no action is taken, taxes will rise by nearly $400 billion. But that scenario can only happen if the GOP sticks to its guns in refusing a tax hike on the wealthiest Americans. This whole fiscal cliff nightmare just goes away if Republicans are willing to make a deal that includes some revenue increases.

The closer you look, the more untenable the GOP's negotiating position becomes. A majority of Americans support higher taxes on the rich. But the GOP is willing to crash the economy to defend historically low taxes on the Americans who have prospered the most over the last 30 years.

There's only one reason why the GOP is refusing to budge. As history has shown again and again, Democrats will cave. So far, that doesn't seem to be the case, a fact that justifiably has the business community worried. Executives are freaking out because Democrats are signaling that they can be crazy too. Maybe it's time for them to pressure their GOP proxies to cut a deal -- in the interests of everyone.