Every time Romney runs into trouble, he starts spreading rumors about his veep pick. Prepare to be underwhelmed 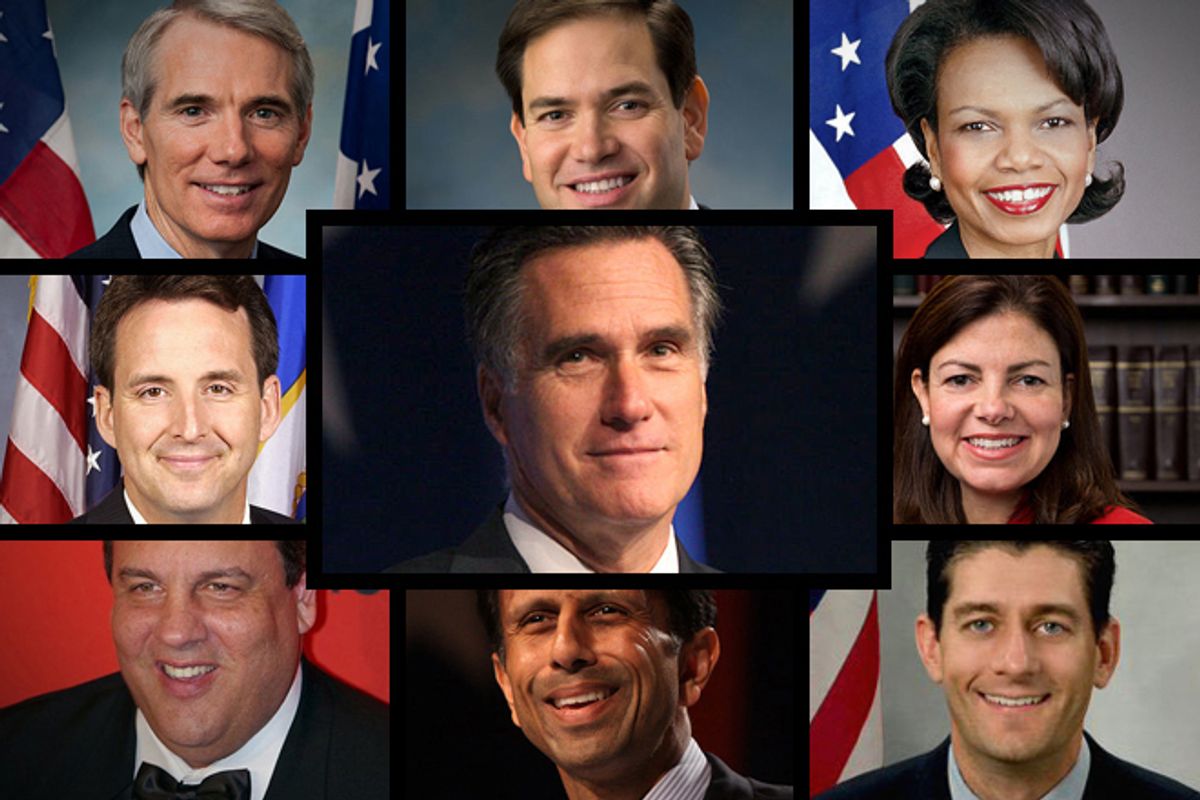 Whenever the news starts getting a little rough for Mitt Romney, there are suddenly rumors that he's just about to pick his running mate. So it is not particularly surprising that we are suddenly hearing more about Romney's potential vice president than, say, his tax returns. Romney says he is going to announce the selection to his supporters soon, with an "app" (he will announce the selection the traditional way, by leaking it to the press just before making the announcement).

The selection itself isn't completely meaningless: If Romney's elected, the vice president may end up having some influence over policy, especially in an administration headed by someone known for his fungible ideology. There's even a chance Romney could make a currently little-known politician into a future presidential contender, though Republican V.P. picks after Bush I haven't really gone on to much glory.

But the speculation is meaningless and the choice won't swing any states. Everyone knows this, too! Even Rick Perry understands. “There are great and talented people out there, but vice presidential candidates are interesting choices that will probably only make two or three days' worth of news, unless they make some huge gaffe,” Perry told CNN in an interview at the Republican Governors Association retreat in Aspen, Colo. “As long as it’s not me, I’ll be cool.”

The running mate pick will be good, maybe, for a brief "bump" -- and it'll make all of Romney's press coverage notably softer for a few days -- but other than that all it's good for is temporarily knocking Bain and Romney's missing tax information out of the headlines. This is why the campaign is dragging the process out as long as possible, too, dropping asinine hints and pushing ridiculous rumors (Condi!!) to people like Matt Drudge. Remember that a few weeks ago, it was almost definitely going to be Tim Pawlenty -- now we are again barely hearing his name.

The glee with which the press goes running after stupid rumors about the timing or identity of the V.P. pick is a wonderful thing to a campaign stuck in a tight race, and Romney is going to milk it for as long as possible. And Romney's media allies are happy to help. Here's Republican hack Bill Kristol just openly fucking with everyone:

Almost two weeks ago, I speculated on Fox News Sunday that Mitt Romney would announce his vice presidential pick early next week, on August 6 or 7. It was, if I may say, a reasonably well-informed forecast at the time. But I didn't take into account the existence and importance of the redoubtable Rafalca, the Romneys' equestrian Olympian, who's apparently made it to the final dressage round on August 7 in London.

Ann Romney, understandably, wants to be there to see Rafalca do his thing. But she also, of course, should be at the vice presidential announcement and the subsequent barnstorming with the VP pick and his spouse. So the announcement of Marco Rubio or Paul Ryan (Steve Hayes and I explain why it really needs to be one or the other in this week's editorial, available online early Saturday morning) has been pushed back, and will apparently take place a bit later in the month. When? I notice that Romney has events scheduled in Florida on Monday, August 13, so if it's Rubio, perhaps he'll be unveiled then. Romney has a Midwest bus tour tentatively planned later that week, so if the choice is Ryan, expect the announcement around Wednesday, August 15.

Ok, Bill. Sure. They're delaying the pick because of Ann Romney's fancy horse.

What of the running mate candidates? There is a chance it will be a woman or non-white person, but those are marginally more "risky" choices and Mitt Romney is allergic to risk in any form. While a good running mate basically does no harm, it's possible for a very bad running mate to be a significant drag on a ticket. There are people beloved by the conservative movement who would terrify or appall moderate voters. And there are the safe choices. It is still probably going to be Rob Portman, especially if his recent efforts to preemptively address his "negatives" are any indication.

Rob Portman is a senator from Ohio, and Mitt Romney would like to win Ohio, so for some time now a lot of people have thought that Mitt Romney might name Rob Portman his running mate. There is one small catch: Portman is a veteran of the Bush administration, and most Americans don't remember the Bush administration very fondly, because it was an utterly miserable eight years. Portman was, for a time, Bush's budget director, which for normal people means he wasn't that evil (not torturing anyone at least!) but that's a big red flag for Republicans, because Bush's budgets were a hilarious joke.

When Republicans are in power, they spend a lot of government money on giving old people free things and waging lots of wars and buying fancy missiles and airplanes and private mercenary armies, and they also cut taxes for rich people, and the result is big budget deficits. When Republicans are out of power they demand that rich people receive big tax cuts and they also complain a lot about the federal deficit. Right now Republicans hate the deficit a lot, so they are all furiously pretending that if they got back into power they'd make it go away, and they do not want to be reminded of this "Bush" person. (They don't mind being reminded of the Reagan guy who also had very large budget deficits but that is because all anyone remembers about him is that he rode horses and knocked over the Berlin Wall.)

Rob Portman was not the director of the OMB for very long -- it was, in fact, one of the shortest tenures in that position ever -- but being in charge of Bush's budgets is still a negative. So Portman is now trying, finally, to spin it. He told the Hill that he may have been Bush's budget person, but that doesn't mean he liked Bush's budgets.

Portman, who served as director of the OMB from May 2006 to August 2007, recalled his behind-the-scenes battles with other senior advisers.

Oh, he was fighting in secret to restrain spending, it turns out! And a happy ending: He succeeded in delivering a balanced budget! But then those mean Democrats made it go away: "The blueprint he submitted to Congress in 2007 would have eliminated the deficit by 2012. Democrats, who controlled the House and Senate in 2007 and 2008, didn’t act on Bush’s proposal."

That is a very generous first sentence there from the Hill's reporter. Bush's 2007 budget (for fiscal year 2008) was honestly not that much different in terms of priorities than his other budgets. It included massive military and defense spending increases offset by finding magical savings in Medicare and slashing Medicaid, and by projecting that future discretionary spending would grow by less than the rate of inflation, which is complete nonsense. It made Bush's tax cuts permanent and ignored spending in Iraq and Afghanistan after 2009. And even if that was the one Bush budget that would have shrunk the deficit, even if it would have balanced the budget in five years (which it wouldn't have), the administration didn't draft and introduce it until Democrats had taken control of Congress, making it effectively dead on arrival. So good work, Rob Portman!

The other knock against Portman is that he's boring (though his boringness is why he's a front-runner for Mitt's running mate). In order to show how untrue that is, Portman played a funny joke on his friend and told the news about it:

To prove it, he sent a 12 oz. bottle of Bud Light as a gift to Hamilton County Commissioner Greg Hartman’s office. Hartman, who has known Portman for over a decade, was recently quoted in the senator’s hometown paper saying, “Rob Portman has had one beer in more places than any man in America.”

The "safest" choice that isn't directly connected to the Bush administration is of course former Minnesota Gov. Tim Pawlenty. As I said, we haven't heard his name in contention barely at all since the "he'll pick Pawlenty any minute now" boomlet in July, but he remains a decent option in that there's nothing specifically wrong with him. His downsides: He won't help Romney win a swing state (Minnesota swings to Romney only in the event of a ridiculous Romney landslide) and when Romney and Pawlenty stand near each other they look like the result of a stock image search for "two Republicans."

Oh, but what about the wild cards? The unpredictable, crazy choices? Well, Romney is not much of a "wild card" sort of human, so his "wild cards" are actually pretty regular cards. Would Romney dare pick ... a lady? Probably not, but if he decides to, it'll probably be Sen. Kelly Ayotte, a fairly conservative New Hampshire Republican. (There's a chance Romney could be competitive in New Hampshire, some people claim. It seems unlikely! But stranger things have happened.) The problem with picking her, of course, is that even though she's not very much like Sarah Palin, she will remind people of Sarah Palin, because the press will keep talking about how she is and isn't like Sarah Palin.

What about people who aren't as incredibly white as Romney, Portman and Pawlenty? There is Bobby Jindal, for example. Historian Jack Bohrer is convinced Jindal's the guy. Jindal doesn't have as much baggage as other guys. He's super religious but doesn't seem crazy.

One problem with picking a Southern governor is that Republican-run Southern states have lots of poor people, and Louisiana has the second-highest poverty rate in the nation, which would seem to undercut Romney's economy message a bit. Another problem: When you search for the Louisiana governor, Google suggests you may be looking for "Bobby Jindal exorcism" or "Bobby Jindal Kenneth the Page." Thankfully, most voters don't watch "30 Rock" so the campaign really only needs to worry about the exorcism story, which is real and amazing and hilarious.

So ... what about Marco Rubio? Romney's path to the presidency practically rests on Florida. But: Marco Rubio used to be Mormon, which is weird.

Hey, Paul Ryan! People love that Paul Ryan! The only downside, with Paul Ryan, is everything he believes. The Obama administration cackles with glee imagining the opportunity to explain the contents of the Ryan budget to moderate voters. Ayn Rand starts showing up in Democratic attack ads if Paul Ryan is the running mate.

Prepare to be underwhelmed, not surprised, by Romney's pick. And please enjoy watching every pundit who confidently made a bullshit prediction pretend it never happened.