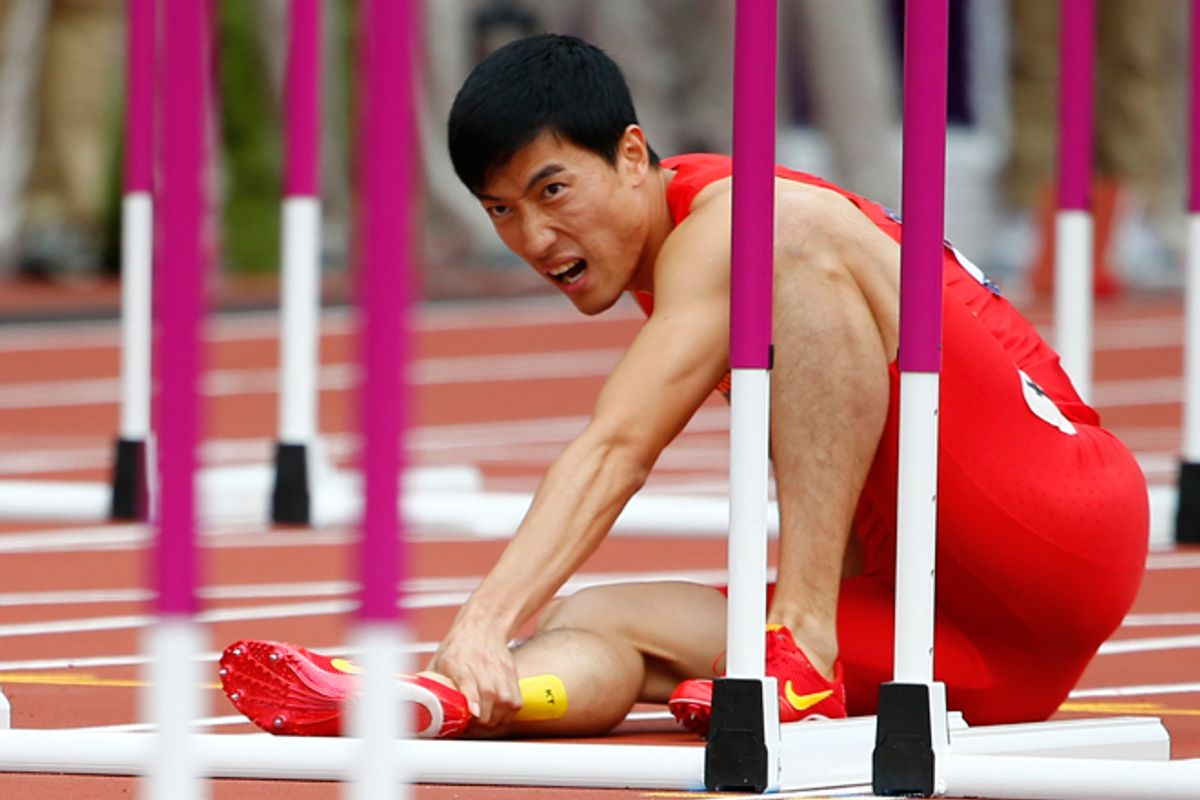 Liu Xiang holds his leg after suffering an injury at the 2012 Olympic Games on Monday. (Reuters/Kai Pfaffenbach)
--

It was supposed to be his big comeback run. It turned out to be his exit march. But what a way to go out. When Liu Xiang, one of China's most famous and beloved athletes, crossed the finish line in London on Tuesday, it was in a manner no one could have imagined.

The 2004 gold medalist and world-record breaking hurdler has had a rough time of it in recent years. In 2008, on his home turf, injury forced him to withdraw from the games after a false start in a first-round heat. It was a disappointment that made his coach burst into tears – and left his nation utterly bereft.

But this time was going to be different. Liu, a superstar in his own country, was returning to the Olympics with high hopes. But shortly after the start of the men’s 110-meter hurdles, he stumbled over the first hurdle. The Achilles' tendon injury that had sabotaged him in 2004 would be his undoing a second time. As the other hurdlers flew toward the finish line, he sat on the track, looking agonized, before pulling himself up and hopping toward the exit, past the wheelchair that was offered him.

Precisely what happened immediately after is unclear. The Associated Press says that Liu was directed back out to the field. Yet in the clip of the event, he is alone as he pauses by the exit and turns around. An official then comes over to him and touches his arm. But whether he was told to get back out there or simply chose to, what he did next was extraordinary. He didn't get in that wheelchair. He hopped back onto the field. And he started hopping toward the finish line. As the crowd cheered, he bounded down the track, detouring at the last hurdle in his lane to kiss it. Then, at the end, his competitors, Britain's Andrew Turner and Spain's Jackson Quiñónez, put their arms around him and guided him, at last, to a wheelchair. Turner, the victor of the race, told the New York Times that "It was horrible to see him limp off like that, so I had to go and help him."

It was a surprising disqualification for a man who's been having an otherwise stellar year. He won the AVIVA Grand Prix Indoors and took a silver at the World Indoor Championships. Liu's team leader, Feng Shuyong, told reporters Tuesday that the 29-year-old has no plans to retire. Yet whatever his professional future, his performance in London will go down as one of the defining moments of his career. Not because he fell down. But because he went the distance anyway. And when he hopped onto the track and bent down to kiss his hurdle, it was a gesture of profound dignity and humility. It was an act of acceptance. It said, the obstacle isn't the enemy. It's the thing that makes you great.