The gymnast's been targeted online and called names for her chilly persona. But that doesn't make her a sore loser 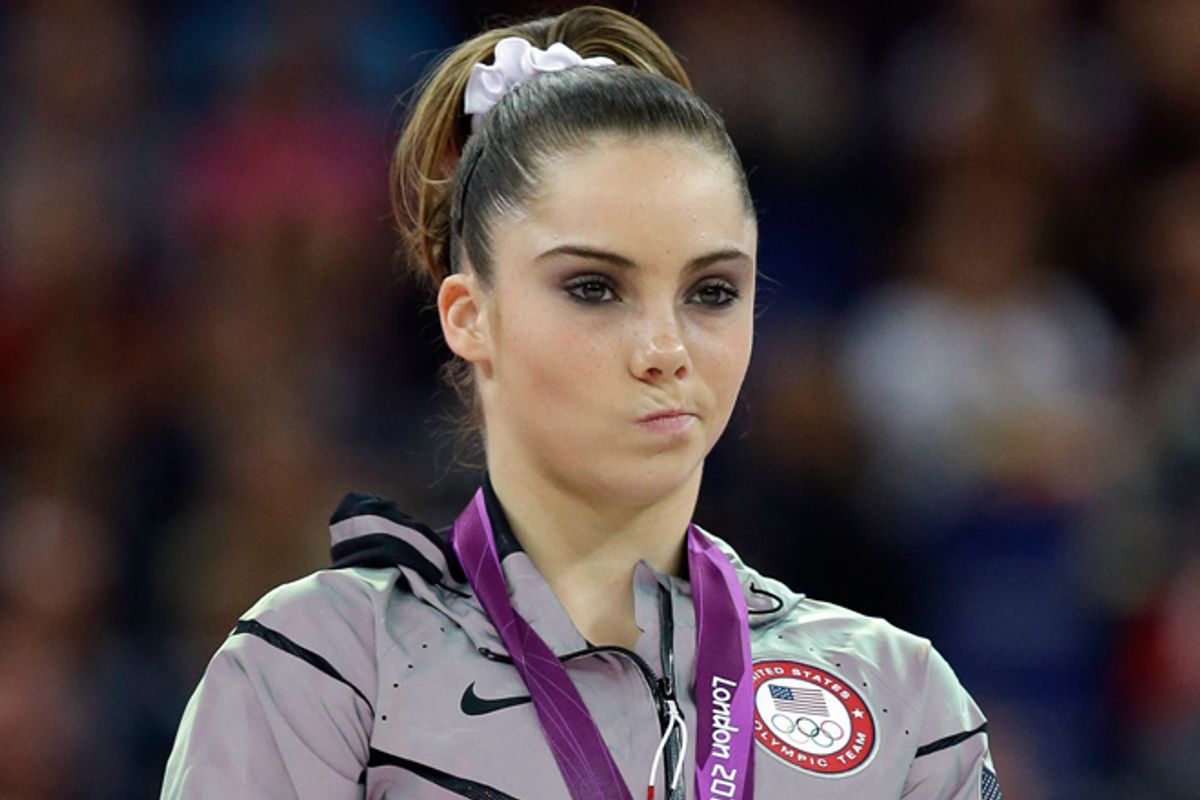 McKayla Maroney during the podium ceremony for the artistic gymnastics women's vault finals at the 2012 Summer Olympics on Sunday, Aug. 5. (AP/Julie Jacobson)
--

McKayla Maroney is not going to win any medals for congeniality. As a member of the U.S. gymnastics team's "Fab Five," she's the one Least Likely to Crack a Smile. But if you think that automatically makes her a sore loser, or worse, that it justifies calling a 16-year-old girl a brat or a bitch, please report to the nearest rock and crawl under it.

Maroney, who came into the games as the reigning queen of the vault, has, in the short space of Olympic competition, become something else – a full-blown meme. And not a very flattering one. Her frequently stern face has already been captured in a million little unhappy ways. There's Maroney rolling her eyes. There she is throwing down the kind of look that would normally transport one directly into the corn. And never has that expressiveness been more on display than it was on Sunday, when she landed flat on her butt on her second vault during the women's finals. After Maroney blew her all-but-in-the-bag shot at the gold, she did not even try to look happy about her silver. Instead, she stiffly accepted a hug from the victor, Sandra Izbasa of Romania, and appeared to flat-out rebuff the affections of the bronze medalist, Maria Paseka of Russia. Later, at the medal ceremony, she looked like she was winning the prize for Person Whose Dog Just Died, twitching her lips grimly and shifting her gaze.

That face, that tough, steely look, has been a wide-open opportunity for would-be comics to poke fun at Maroney's "Oh, hell no" countenance, and to riff on her "mean girl"  persona. She's had entire galleries devoted to her "bitch face,"  which also serves as her unofficial nickname. She's been a "fool" and a "brat" and a "baby," a "snobby," "pissy" "diva." Well, what do you expect from the same civilization that also brought you the endless ragging on Gabby Douglas' hair?

Maroney isn't the naturally smiling, ebullient Olympian. She doesn't exude the warmth of Sanya Richards-Ross or outdoorsy ease of Kerri Walsh. Nothing about her serious, controlled persona says, "Hey, world, love me!" That's a difficult thing for a lot of people in the world to accept in a female. It's even more difficult for fans to grasp that an Olympic gymnast, a girl in the sport that's historically given us sweethearts like Nadia Comaneci, Mary Lou Retton, Kerri Strug and Shawn Johnson, could be so flinty.

So when I wrote Monday of Maroney's grace in defeat, it was not because, as one reader suggested, I was "high" when I was watching the women's finals. It was because I saw something different. Yeah, I saw a girl who looked furious, too. But I also saw one who, to quote "Moonrise Kingdom's" Suzy Bishop, was losing her temper with herself. Was she really snubbing her Russian competitor? Maybe, but did you notice how she barely let her own coach touch her? The girl who just a few days ago could confidently refer to her vault routine as "like, autopilot" had become, in a split second, the girl who fell on her ass. This was a move she'd executed perfectly 33 times in a row. And the one time it counted, she fell. She looked utterly stunned. As she said frankly afterward, "I didn't deserve to win gold if I landed on my butt. I'm not disappointed about the silver; I'm disappointed about my performance."

That's the face I saw Sunday – the face of a fierce, tough girl whose fiercest, toughest competitor is herself. A girl who lost to herself and was tremendously disappointed. A girl who was mad, not at her medal or her competitors, but with McKayla Maroney. On Monday, no doubt in response to all the "bitch face" criticism out there, Maroney said on Twitter that "For anyone who thought I didn't want to hug Maria and Sandra that's not the case (: They are my friends, and I'm proud of them both! I wasn't thinking straight and I totally forgot what to do, but don't worry. I gave them both hugs after!! <3 Sportsmanship is so important to me and I hope you know i would never do that intentionally!! Please forgive me!!" She's a 16-year-old who got up from the kind of shocking, public, humiliating disappointment that few of us can even imagine, and, with every camera in the world trained on her face, couldn't plaster on a fake smile. That doesn’t make her a sore loser. It makes her real and human. No forgiveness required.