The network's Olympic tape delay has incited a mob of angry tweeters. Is the media paying them too much attention? 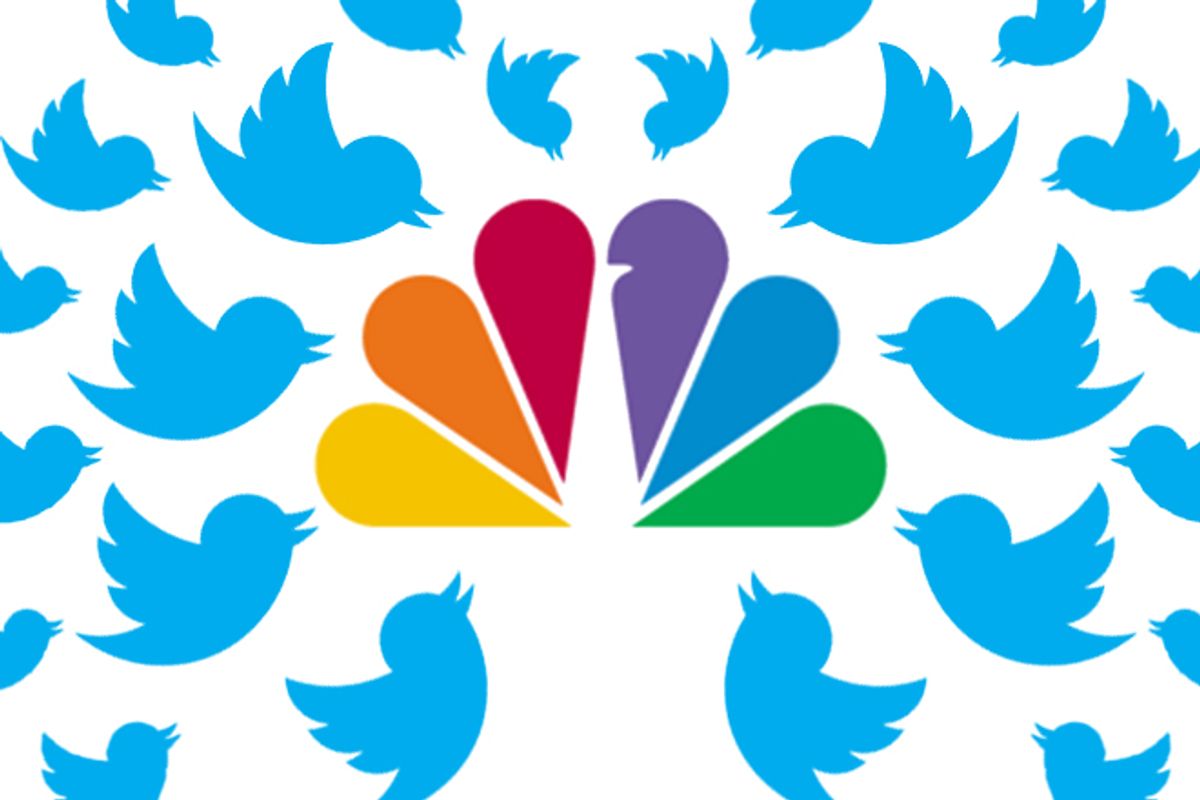 One of the biggest stories of the current Olympic games has been NBC's decision to air almost all of the events on tape delay, which means that it's been very easy to know the winners before seeing the competition. (In some cases, NBC itself has "spoiled" them.) The Internet has been rife with complaints about this, to such a degree that complaints about the complaints have emerged. Will Leitch has pointed out that most people aren't really bothered by this tape delay (a contention backed up by some poll numbers, though admittedly ones financed by NBC), and reminded us that Twitter isn't representative of the wider world. Meanwhile, Gawker's Adrian Chen has done some digging and turned up evidence that people on the Internet were complaining about Olympics tape delay as early as 1992. To put this in context, however, it's important to note that the mainstream media has also carried such complaints in the past -- indeed, they crop up every two years like clockwork. "Viewers angry about Olympic tape delay" is basically a dog-bites-man story at this point.

So what's different about 2012? Two things: Twitter exists, and there have been way, way more stories in the press about the tape delay complaints. The two seem to be linked. Lexis-Nexis searches show that when the Olympics are held outside North America and the events have been shown in the U.S. on tape delay, there have generally been around 100 stories per Olympics about the delay over the last 15 years. There were 128 for Beijing in 2008, 141 for Athens in 2004, and just over 100 for Turin in 2006 and Nagano in 1998. Prior to this, there were about 40 each for Lillehammer '94 and Barcelona and Albertville '92. (The one outlier is Sydney, in 2000, where just over 300 stories about tape delay appeared.) For the first 10 days of the games this year, however, there have already been 353 stories. If that pace continues, we'll see just under 550 in total. And of those 353 stories, 65 percent mention Twitter. At the same time, few have contended that the tape delay issues we're seeing in 2012 are worse than in previous instances. In other words, what seems to be happening is that editors are monitoring Twitter, seeing that the tape delay issue is a much bigger news story than they thought, and consequently running far more news stories about it than they ever had before. In some ways, this would seem to confirm the utopian idea that the Internet gives consumers unprecedented power to talk back to big corporations and get them to correct faulty products, whether those be electronics or media coverage. But Leitch is right to point out that Twitter is an unrepresentative sample of the population. If the higher volume of news stories about tape delay is being driven by the prevalence of the issue on Twitter, then this is not correcting news coverage. Rather, it is being distorted by a biased and self-interested group of technological elites. Twitter is serving as a "virtual public" for journalists eager to give the public what they want. But the virtual public seems to be far different from the real one.

It's become common to treat Twitter in this way, using the consensus it generates as a cheap alternative to actually going out and identifying matters of public concern. That's not surprising; after all, a service used by some 500 million people to post their unfiltered thoughts and opinions intuitively seems a data trove of what lots of people care about. And so the press has treated Twitter like a virtual public, an easily accessible and already aggregated simulator of the messy, complicated, hard-to-reach opinions of actual people. Like any model, it provides a cheap, tempting way to quickly test out ideas and gain new insights. But also like any model, it is only valuable insofar as it accurately reflects the reality it's supposed to be modeling.

And in the case of Twitter, that modeling is subpar. Only 15 percent of Americans who use the Internet are also on Twitter, and that 15 percent isn't representative: it's highly biased toward the young and the educated. And highly active users are overrepresented, with 5 percent of users creating 75 percent of the content. (Not to mention that for popular brands, up to 46 percent of their followers are spam accounts.) Moreover, when analytics are run on Twitter, those aren't even capturing the entirety of the Twitter universe, accessing instead only a small percentage of all tweets. And in the case of the Olympics, it seems that some 75 percent of the population is perfectly fine with the tape delay. The "virtual" in virtual public thus implies a lesser-ness, a lack, a sub-par imitation of the real thing. It is almost there, but not quite. Like virtual reality, it is blocky, confusing and ultimately far less worthwhile than it seems at first.

But it's very tempting to make use of it anyway. The press has often been interested in better reflecting what the public wants, and so, like many other companies, they've been using social media as unobtrusive market research. And as a way of increasing their subscriber base, that's fine. But the thing about the press is that they're not supposed to just be serving their customers. In a democracy, they're supposed to be serving everyone. The product they produce is not just intended to satisfy their clients, but to provide useful political information. The media's depiction of the world helps to shape the world itself; the things it emphasizes or ignores can become correspondingly skewed in reality. And so, even as the press has always been subject to market pressures, it has also been expected to be aware of this, and present some corresponding evidence that they're also making a good-faith effort to present the world in its wholeness.

Using Twitter as an indicator of what the public is really interested in is thus more insidious than the normal audience-chasing gimmicks the media employs (bigger graphics, instant polls, "iReport"), because it appears both that it's not being done as conscious click-bait, and that the Twitter population is being honestly conflated with the public at large. Anyone who's written for an online publication has faced the pressure to just post about whatever's trending, but this isn't noticing that Terrell Owens is getting a lot of mentions and writing about Terrell Owens; it's crafting a news story specifically around the idea that something is important because a lot of people on Twitter are talking about it, as is the case with the Olympics tape delay. That, in a nutshell, is what it looks like when the virtual public is confused with the actual public. The press is using something that feels representative but is, rather, profoundly biased to represent the public as a whole, and, as a result, dramatically overcovering an issue not that many people care about.

This is not a problem likely to go away. Twitter may be one of the first services able to attract a large enough user base (and have public enough metrics) to seem a useful model of the population at large, but even if we learn to see it as biased, the nature of the Web is that such "big data" singularities are going to recur. Such services offer undeniably rich troves of data, and it would be foolish to either request or expect that we avoid them entirely. It is, however, possible to modify our samples to reflect a lack of representation from one group or another. Twitter can serve as a source of stories, but with the caveat that it only represents that particular group of people, not the opinions of the population at large. Such precautions can keep the virtual public from obscuring the real one we're supposed to be reading about.