Common in real life but still taboo on-screen? Talking with the stars of the zany, abrasive "2 Days in New York" 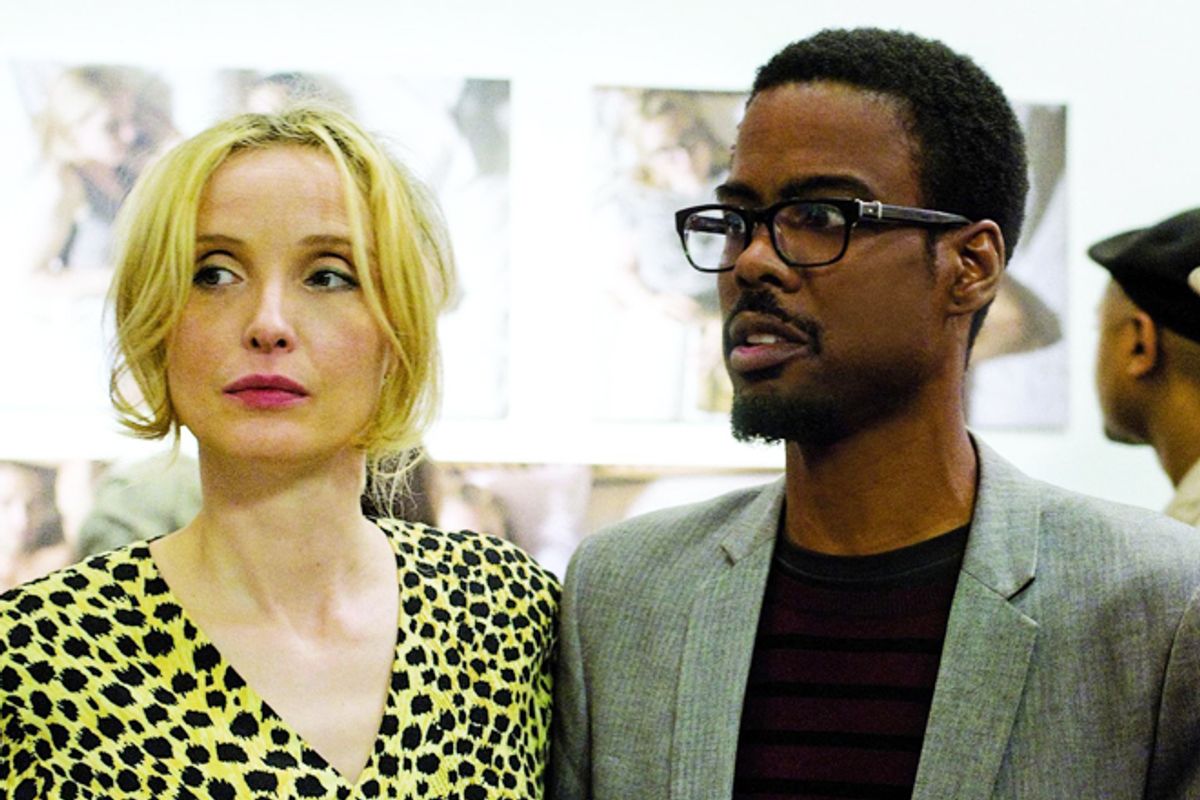 Chris Rock and Julie Delpy make a striking couple – and I’m not talking about what you might think I’m talking about. The fact that their characters are of different races isn’t presented as a huge deal in Delpy’s new film “2 Days in New York,” and as they both said in our conversation, it increasingly isn’t such a big deal in the real world either. Whether sitting next to each other on a sofa at the Sundance Film Festival or playing a squabbling married couple on-screen, their modes of being in the world could hardly be more different. (An earlier version of this interview was published from Sundance.)

Rock is a cool, laconic, thoughtful character, a man of few words who takes the time to ponder things before reacting. Delpy seems jumpy and overcaffeinated, constantly in motion; she talks a blue streak, laughs at her own jokes, half-seriously accuses me of sexism. In fact, she describes herself as “panicky and neurotic,” and “a little bit nuts.” (Oh, and just to be clear: Despite what you may read below, Rock and Delpy are not a couple in real life.)

Fans of Delpy’s zany 2007 relationship comedy “2 Days in Paris” will already have a good idea what to expect here, but it really doesn’t matter whether you’ve seen the earlier movie. Jack, the American boyfriend played by Adam Goldberg in that film, has evidently moved on (leaving behind a young son), and Delpy’s character, a somewhat unhinged conceptual artist named Marion, is now shacking up with a Village Voice journalist and radio host named Mingus, who has a daughter of his own. (Rock says the character is based on the prominent African-American journalists Nelson George and Elvis Mitchell, both friends of his. If you’ve met either of those guys or seen them on TV, the movie just got a lot funnier.)

Rock definitely gets some laughs here, but he isn’t doing improv or stand-up shtick, even though he does deliver two monologues to a cardboard cutout of Barack Obama. (It’s a gag that shouldn’t work – the guy whose cool imaginary friend is the president – but is somehow hilarious.) The film’s principal source of comedy is the maelstrom of cultural misunderstanding that ensues when Marion’s father (played again by Albert Delpy, her real father and a veteran French stage actor), her compulsively flirtatious sister (Alexia Landeau) and her sister’s wannabe-black boyfriend (Alexandre Nahon) all descend upon Marion and Mingus’ modest Manhattan apartment.

Delpy, who co-wrote the screenplay with Landeau and Nahon, specializes in an awkward, almost abrasive comedy that pushes her characters and the central relationship to the edge of collapse, before pulling back for the requisite happy ending. I met Delpy and Rock in the back room of a cafe in Park City, Utah, the day after the Sundance premiere of “2 Days in New York.” In an earlier conversation outside, Rock emphasized that he’s eager to push onward from this into dramatic roles. “I think you have to do something strong if people are used to seeing you be funny,” he said. “I’d have to do something where I was a killer, or a transvestite. A transvestite killer, maybe. Something where I get to really act.”

You know what’s funny in your movie? Well, a lot of things. But the fact that when Alexandre Nahon’s character is trying to impress you, Chris, the only thing from black culture he can come up with is Salt ‘n Pepa. I’m not even sure why that’s funny, but it is.

Julie Delpy: Why are you talking to him? I wrote it!

I know you wrote it, but he’s in the scene. I was talking to both of you.

J.D.: It’s just that when you’re a woman filmmaker, people always think the guys have written their own dialogue.

C.R.: Right, and when it’s a comedy people always think the best stuff is ad-libbed. Always!

You’re right. But why do they think that?

C.R.: Probably because the best stuff in comedy always is ad-libbed. [Laughter.]

So, Julie, why is Chris’ character named Mingus?

J.D.: Well, first of all it’s to honor Charles Mingus, obviously. But I thought it was a good character name.

J.D.: In both languages. So it was perfect.

So how did you two get hooked up for this movie?

C.R.: We were sleeping together anyway.

C.R.: Should we work together? We probably should, just to throw our significant others off the track: “You guys are sure having a lot of meetings!”

J.D.: How did it happen? [Reacting to a sudden sunbeam.] Oh, I hate the sun! Can you stand the sun? I like to be in the shade.

J.D.: I hate it! I’m a radish, or maybe a mushroom. I like the basement. Basically, when I decided I wanted to write something continuing the character of Marion and her family, I thought I couldn’t do a sequel with the same guy. It would be too much like “Before Sunrise” and “Before Sunset.” And I thought that Marion was the kind of girl where it might not work out with Jack anyway, so I thought: Oh! She has a new boyfriend! The first person that came to mind was Chris. I knew his work and I loved his work. I had met him briefly at an Oscar event when I was nominated for the “Before Sunset” screenplay. I loved his energy, and I thought, that’d be an interesting couple, that sounds really cool and fun. So I called Chris’ agent, who told me: “Write a good script! Don’t write a bad script!”

Chris, you were saying earlier that you don’t get offered that many acting roles, except as, you know, being the cut-up.

How similar to you is Mingus?

J.D.: His in-laws are obviously not …

C.R.: Not French, right. My in-laws are from Oakland. You ever been to Oakland?

I have. I lived there as a teenager.

C.R.: Right, there you go. So you know, from Brooklyn that’s a whole different thing. But, you know, there’s a lot of levels on which I can relate to this guy.

How much of this story is autobiographical, Julie? With your real dad playing your dad in the film, there’s got to be something real in there.

J.D.: Well, there’s the stress of having a family and being an artist without totally selling your soul – and Marion does sell her soul, literally. How do you keep on going as a mother, artist and writer? And then there’s the question of mortality. She loses her mother, and I lost my mother not long ago. I had to deal with that, I had to get it out somehow.

I’ve had a lot of uncomfortable moments in my life, a lot of moments where you’re with someone and then it suddenly falls out of place, like a Rubik’s Cube that gets turned one way and then it all goes wrong. At the moment it happens it’s very painful, but then when you look back it’s kind of funny, as long as no one dies in the mix. It’s happened to me a lot – I’m a panicky, neurotic person, so I get in crazy situations.

Awkwardness is one of the most basic elements of comedy, and you push that pretty hard in this film. Maybe never harder than the scene when Mingus and Marion’s father go to get a massage together. Chris, I understand you don’t speak any French, and I’ve met Albert, who speaks almost no English. That had to be kind of weird!

C.R.: It really was kind of awkward to shoot with a guy where we don’t speak the same language. I mean, not at all. There’s nothing. Nothing!

J.D.: [to C.R.] The scene where my dad tickles him with a feather was mostly ad-libbed, and I could see in your eyes, “What the hell is going on? What’s going to happen?”

C.R.: Literally, you’re remembering improv class: OK, run with it! Don’t say no! Don’t panic! Someone comes up with a situation, you say, “Sure!” You gotta play along. Also, the guy I’m playing is, like, a combination of Nelson George and Elvis Mitchell. I’ve hung out with both of those guys. I met Nelson when he was working at the Village Voice, which is exactly where my character works. And they’re both very cool, they don’t overreact. So I had that to work with.

That’s funny. Your character also reminded me of the novelist Colson Whitehead, who’s the same kind of cool customer.

C.R.: I don’t really know Colson Whitehead, although I’ve read a couple of his books. It’s more Elvis Mitchell. Even the hair is, like, an homage to Elvis Mitchell.

J.D.: It was one of the first things I thought of when Chris said OK, that it would be funny to have someone who talks to a cardboard cutout of the president. Plus, it’s not about big political issues or whatever, he talks to him about his love life.

C.R.: We both love “The King of Comedy.” We’re big Rupert Pupkin fans.

J.D.: It’s my favorite film. So it was also a bit of an homage to that. You know, people say Chris is the straight man in the film, but it’s not really true. He does talk to the president. He has his own form of craziness.

That whole thing would be really, really different if George W. Bush were still president.

It’s interesting that this movie isn’t really about the issue of interracial relationships. It’s just accepted, and hardly anyone talks about it.

C.R.: Because it isn’t really an issue. Show me one place where it’s still a taboo. I see it every day, and I see it more outside of New York and L.A. I see it more in the middle of the country than in the cities.

J.D.: You know, I think in film it’s still a taboo. I never thought about it when I was writing the screenplay, and I didn’t even want to bring it up in the film. It’s just old, like something from the ‘60s, or even the ‘50s.

C.R.: One of the movies I’m working on, I’m trying to get Melissa McCarthy to play my wife. I think we’d make the perfect Jerry Springer couple. But it’s kind of boring, to bring it up as an issue.

Chris, you talked earlier about going for more well-rounded dramatic parts. I could imagine a career arc like, say, Tom Hanks, where you start out in comedy and move toward more serious material.

Do you enjoy being a movie actor? It’s a pretty different job description from being a stand-up comedian.

C.R.: Oh, yeah. I like working. It’s fun! The acting thing is great, as long as the work is good. When you have to sell something bad, it’s awful. You know, would I rather be with my kids right now? Yes. But I’m sitting here with you, and it’s a good movie. It feels good to sell it! Do you know how horrible this would be right now if I didn’t like the movie? [Laughter.]

I have the feeling I’d better not ask you which of your movies are the really bad ones.

Yeah, that’s right. Because I’m not gonna tell you.