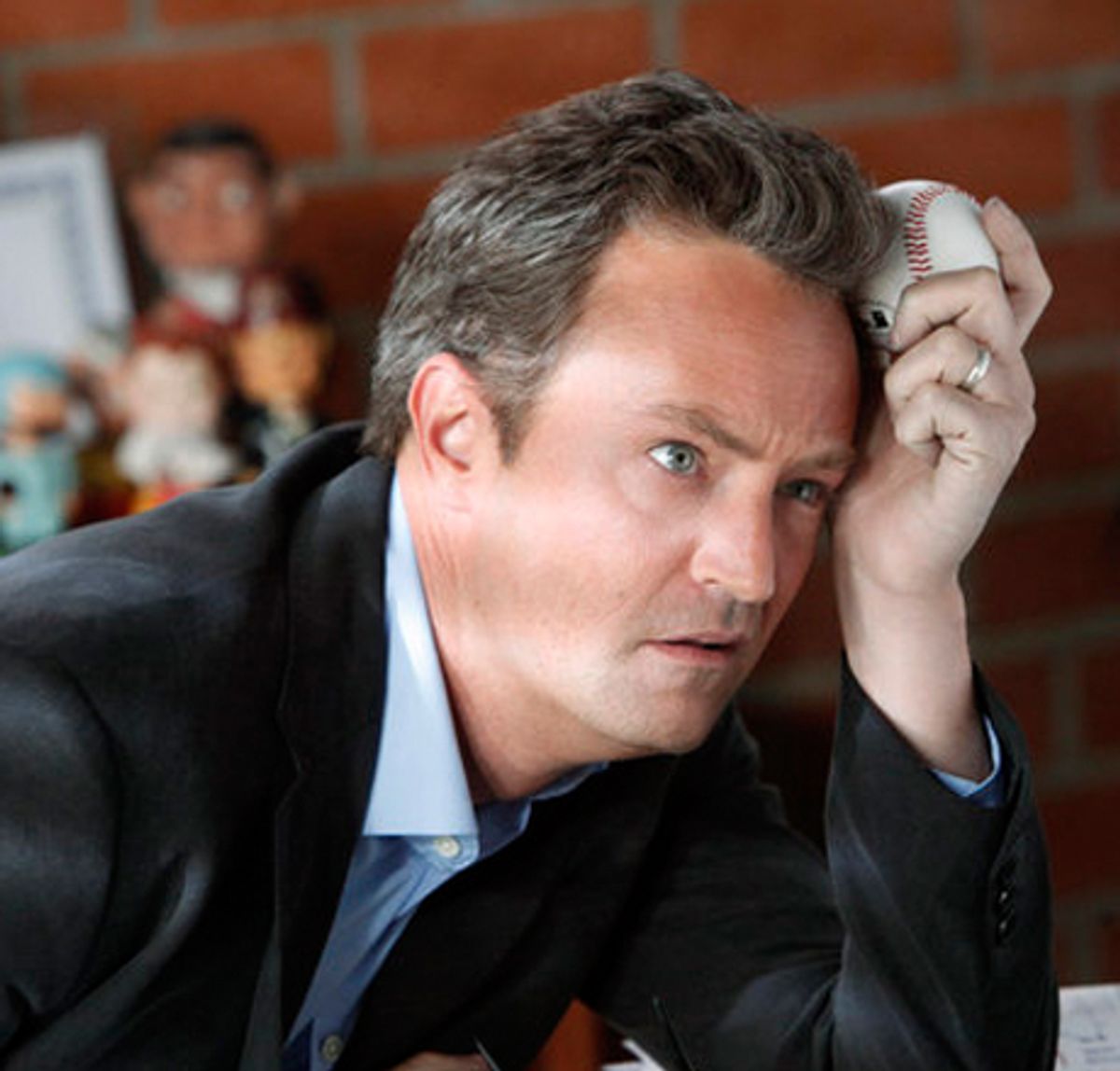 In an attempt to capitalize on an Olympic-size audience, NBC is sneak-previewing two of its fall sitcoms in the coming days. Tonight the network will air “Go On,” which stars Matthew Perry as a widow in a support group, and on Sunday it will air “Animal Practice,” about a sexually potent veterinarian who doesn’t like people very much. Both of these shows will begin in earnest in September, at which point I’ll review them more rigorously, a feet-dragging strategy born entirely of the hope that between now and then NBC will send more episodes of the series out. If this is already sounding like too much critic-y throat clearing, hang on, because I am about to cough up some more writer anxiety phlegm.

Reviewing a TV comedy based on its pilot is not like reviewing a book based on its first chapter — which would be silly enough — so much as reviewing a book based on its book jacket. A pilot is, intentionally, the most simple-minded, immediately graspable distillation of a show. It is a showcase for plot, an introduction to the setting and the players, a sitcom reduced to its most high-concept tag line. Based on their pilots, “30 Rock” was a show “about the making of a sketch comedy show,” and “Community” was “about a motley group of community college students,” even though — many seasons later — it's obvious that saying either of those shows are “about” anything so narrow and concrete would be the most moribund reading of them possible.

Occasionally, someone writes a stunning or horrifying book jacket blurb. “Community” and “Modern Family,” to name two recent examples, had excellent pilots (and even so, it was impossible to tell the sort of ambitious heights “Community” would soon ascend). Each autumn is littered with series like “Work It” that had insurmountably horrible beginnings. But most pilots fall in the middle, where they are neither wonderful or terrible, so much as fine, less fine and more fine, and sometimes in misleading ways. (Counterintuitively, “2 Broke Girls” had a pretty fine pilot, while “Parks and Recreation,” “Happy Endings” and “Cougar Town” had pretty not-fine ones.) Comedies more than any other TV form can get better as they progress — not just because we, the audience, get to know the show and its characters, but because the people making the series are figuring out exactly these same things.

So, with my throat all cleared now, I will say that on the strength of one episode, I would totally go on a second date with “Go On.” Perry stars as Ryan King, a sassy sports radio host whose wife has recently died, and who is forced to join a support group against his will. (Real men don't like to talk about their feelings! They like to get back to work! etc etc.)  Like “Community,” “Go On” has a premise that allows a genuinely diverse group of strangers to hang out with each other, but unlike “Community” it seems grounded in a much more standard, staid sitcom tradition. The cast is full of actors who pass the likability test, though some don't yet have characters to match. Julie White is razor sharp as an incensed, newly widowed lesbian, and "Everybody Hates Chris'" Tyler James Williams is sweetly contained as a grieving brother, but the wonderful Tony Award-winning Laura Benanti — who recently trooped through "The Playboy Club" — is forced to go way too high-strung and spineless as the grief group leader.

In his wonderfully scathing review of the show for New York, Matt Zoller Seitz  — exemplifying why it is so much fun for everyone when a pilot inspires intense feelings —  takes particular issue with the goofy nature of the grief scenes. In the pilot’s major set piece, Perry, ever the sarcastic, turns the grief meeting into a competition to see who has it worst, the sort of moment that suggests that “what his fellow mourners really need isn't listening, empathy, patience, and understanding, but contrarianism and sitcom shenanigans” (and, of course, sports metaphors). Seitz is right, but it just didn’t bother me that the show was departing from both realistic grief group habits and grief group best practices — yet.  “Go On's" treatment of its morbid source material is extremely light. If, over time, the show ignores its characters' pain and darkness, their trauma not materially different from, say, everyone on “Cheers'” desire to have a beer, that will be outrageous — but I'll need to see more to know.