Healthcare in Appalachia: Dying for a ride

No matter what changes we make to healthcare, in rural America, simply getting to the doctor is a big problem 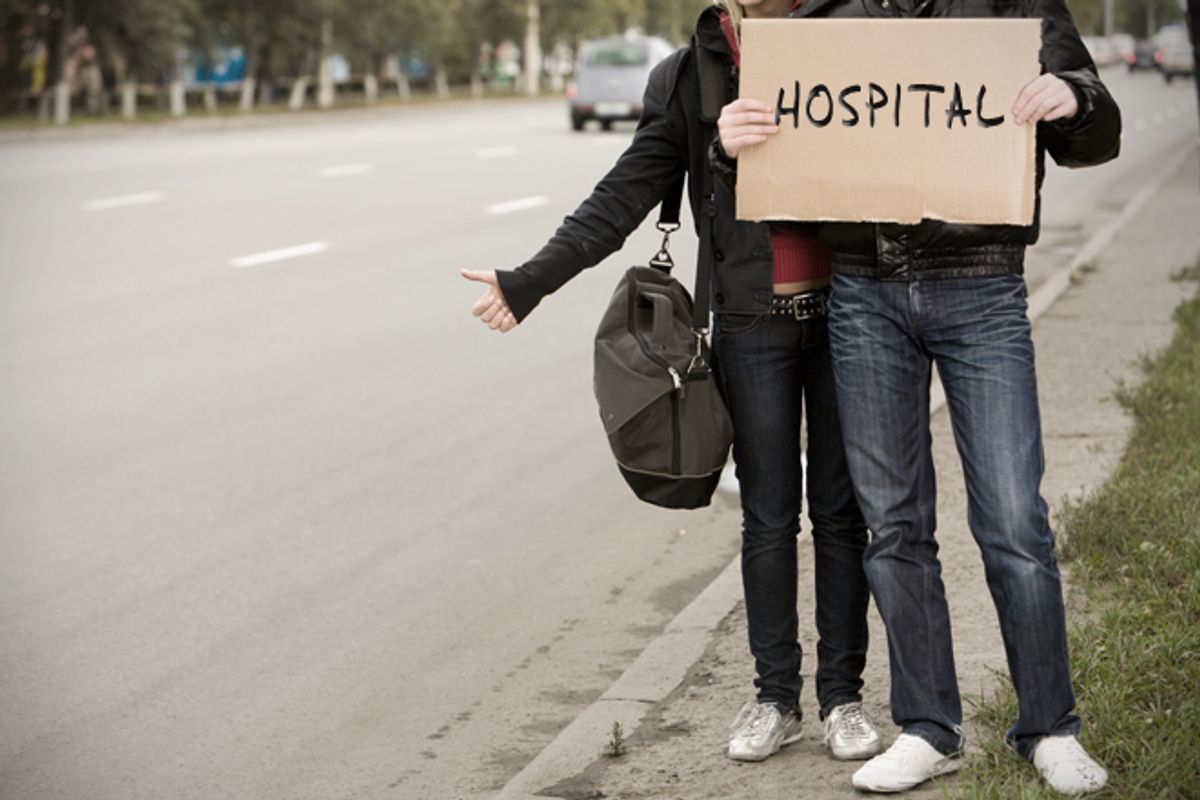 This is the second in a three-part series on rural health-care challenges. Part one, on diabetes in Appalachia, can be read here. Part three will run Friday.

LOUISVILLE, Ky. — Fausta Luchini's client was obese and suffered from hypertension. "David," a middle-aged man, came from a farming family but wanted to make it on his own. And the clinical psychologist is still frustrated by the way the medical system failed him. All for the want of a ride to the clinic.

“David really wanted to work. He didn’t want to spend all his time in the rehab program or on [his family’s] farm, either," she says. "But he couldn’t get a job because he didn’t have a car — or a driver’s license. Then he got a job at a fast-food restaurant. For a while he was coming into our center, [picked up by] Medicaid, and then he would leave around 10:30 in the morning. He was going over [to the restaurant] for the lunch shift and then coming back in time for a ride back home — which was resourceful.”

And it violated Medicaid rules.

Mental patients can only use Medicaid-funded transportation to come to a treatment center. When the taxis that held Medicaid contracts found out, Luchini said, they blew the whistle -- which gets to the core of a major problem for rural patients who count on Medicaid. Behavioral rehabilitation formally aims to reinsert patients into family or community life. But clinicians who work in rural America say the absence of public transportation makes getting back into a normal community almost impossible.

Most of the Seven Counties clients live in rural towns and villages east and south of Louisville. Nearly all are poor and, says Seven Counties executive director Anthony Zipple, suffer from multiple illnesses that the Medicaid system doesn’t address. And too many of them can't get to clinics on their own.

“These folks are at far higher risk than the general population for chronic, expensive, life-threatening medical problems,” he said. "The way we have [medical care] structured in the United States, and particularly in Kentucky, doesn’t make a lot of sense.” The central dilemma, say mental health specialists, is the categorization of care into separate compartments -- and they say it’s not at all clear that even the reforms proposed under Obamacare address those divisions.

For example, a key part of the ongoing healthcare reform efforts requires patients to declare a “medical home,” much as it does in most European healthcare systems, in order to control costs and coordinate care through an “accountable care organization.” Zipple argues that the pieces of the system are not linked together in a way that makes sense. “The divide between behavioral health and the rest of medicine is substantial,” and that divide leaves his clients worse off than other poor people.

Medical care, public or private, he and his staff say, separates physical illness from medical treatment -- not only in the way Medicaid and private insurance pay for care, but also with the research models governing pharmacological research into drug efficacy and side effects. “A lot of the medications we use, particularly the anti-psychotics, have side effects that induce all kinds of metabolic problems. It’s well-known that people on these kinds of drugs are at higher risk for weight gain, diabetes and increased cholesterol levels — all of which result in shorter life expectancy."

“People with serious mental illness in this country die 25 years earlier than the rest of the population,” Zipple says. Roughly two-thirds of those conditions are generally preventable through a combination of dietary control, individualized medication and physical activity. And, Zipple says, life expectancy among mental patients has continued to decline as treatments have grown more expensive. “Life expectancy for people with serious mental illness has actually gotten shorter over the last decade."

Much of that has to do with buses and taxis.

“Transportation is the biggest thing,” says psychologist Laura Escobar-Ratliff. Escobar-Ratliff works with the Seven Counties group in the rolling farmland of Shelby County, 40 minutes east of Louisville. Shelby County has no bus or taxi service to take people shopping, to fill prescriptions or to work, she says. Medicaid-reimbursed vans can pick up patients to come to her office -- but only for rehabilitation treatment programs.

“But,” she adds, “there are caveats. If there’s a car registered to your address, you can’t use the service — even if the car doesn’t run.” Yes, she admits, patients can get written waivers from the Medicaid authorities in Frankfort, the Kentucky state capital, but only if the client pays a state-certified mechanic to fill out a form, and often the clients can’t afford the cost. If there is a car that the wife (or husband) has to use to go to work, a waiver can also be granted through formal application, but, says Luchini, “They don’t want to do that because they don’t want the boss to know her husband comes to Seven Counties [for mental health care]."

“And," adds Escobar-Ratliff, "it will have to be repeated every year ... so she has to go back to her boss to say that her husband’s [mental)[ condition isn’t a temporary thing — it’s chronic.”

“These are real barriers,” says Luchini. "But then if you get the [Medicaid] transportation, you may get picked up late, so you miss the appointment, and when they get you here we’re seeing somebody else -- and you have to wait 'til the next time."

Often, they said, figuring out transportation leaves mentally disturbed or retarded clients so lost or confused that they quit coming to Seven Counties -- even though they believe that many, even a majority of their clients, could reenter their communities if Medicaid and state rules were redesigned. Often they say they are told that financial constraints don’t permit such changes. But Michael Ringswald, a Louisville banker who sits on the Seven Counties board of directors, insists that more flexible policies would actually save Kentucky’s Medicaid program money.

Ringswald cites a new report from a watchdog group, Kentucky Voices for Health, showing that the state spends nearly twice as much of its Medicaid money on institutional — or nursing home — facilities as it does on independent living support, exceeded only by Michigan, Alabama and Mississippi. Another report from AARP scored the state 46th in the nation in the quality of its long-term care. The same report estimated that more than 1,400 nursing home residents could be supported far more cheaply if the state and federal Medicaid systems redirected their policies and programs toward independent living for clients.

But the overwhelming majority of institutionalized behavioral care clients do not go into nursing homes. Instead they are sent to so-called Personal Care Homes, which are often abandoned hospitals or motels that, in Ringswald’s view, are simply “warehousing” institutions that take mentally ill people directly from the state’s psychiatric hospital, feed them, provide bathing facilities and administer anti-psychotic drugs -- at a cost of $1,158 per month to the state.

Redirecting Medicaid behavioral care toward job-holding and independent living, he maintains, not only is better for the clients, “it drops the costs dramatically. Once you start warehousing them in personal care institutions, you’re always going to have to warehouse them.”

These stories grew out of reporting assignments for Kaiser Health News.