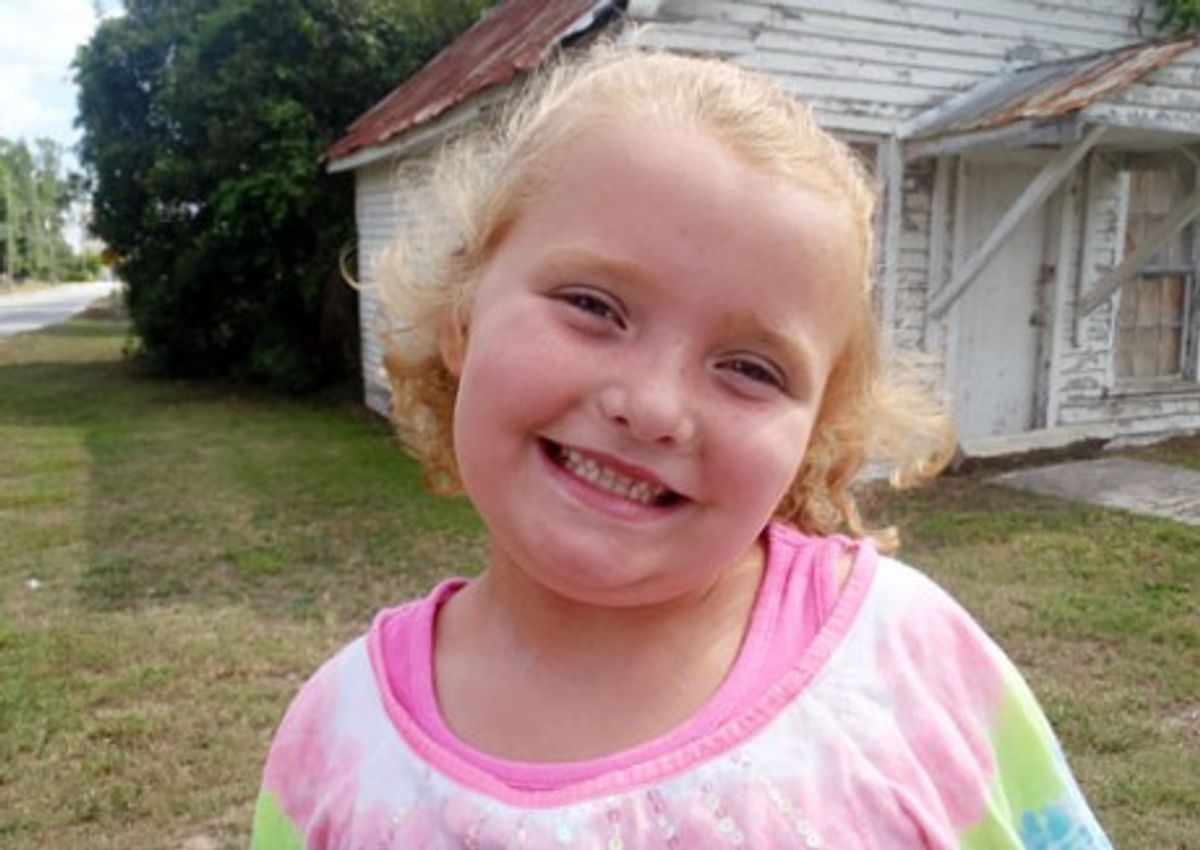 “Here Comes Honey Boo Boo,” which premiered last night on TLC, stars a 6-year-old named Alana with a huge personality and a habit of imitating the speech patterns of the “sassy black woman.” Alana became Internet famous after a few searing appearances as a beauty pageant contestant on TLC’s “Toddlers & Tiaras,” a long-running exercise in documenting the supremely dysfunctional mother-daughter relationships of the future.

On “Toddlers” Alana shared her feelings, made her tummy talk to the camera, happily farted, and generally exhibited the sort of high-energy fearlessness and lack of inhibition that has served reality TV stars three to 10 times her age very well. She also birthed a number of viral videos, one that showed her extremely hyper interaction with “go go juice”(not alcohol, but a mixture of Mountain Dew and Red Bull, if that’s any better) and another that captured her way with urban slang, complete with fierce snapping, head shaking, and the dubbing of herself “honey boo boo child," from her quote, “Girls must be crazy if they think they’re gonna beat me honey boo boo child!”

But if Honey Boo Boo is the named star of the show, “Here Comes Honey Boo Boo” is really a family series. It fits into the TLC menagerie not only because it is a “Toddlers & Tiaras” spinoff, but because it is another freaky brood show like “Jon & Kate Plus 8,” “19 and Counting” and “Sister Wives.” As with many of these series, “Honey Boo Boo” wobbles along that strange line of being at once an exploitative mess, and not just an exploitative mess. (On an earlier episode of “Toddlers & Tiaras,” the family was alerted by the police that a deer had been killed. They cut up the road kill, named it Darlene, put most of it in the freezer, and ate some for dinner. Whatever else is happening on “Here Comes Honey Boo Boo,” a family that happily considered roadkill a part of their diet is now getting paid.) Every minute I watched I was judging the participants, and, God help me, also being won over by the fullness of their personalities.

If behind every man there is a strong woman, behind every toddler made to dress up like a creepy blond doll there is a mother. The real star of “Here Comes Honey Boo Boo” is Alana’s mama, June. June is a 309-pound woman who is the source of much of Alana’s joie de vivre, and the type of truth-is-stranger-than-fiction personality it would be impossible to plausibly render in a script. She farts and proudly talks about her many chins, insists she and her family aren’t rednecks before going to the redneck festival, chastises women her size for wearing bikinis while encouraging her daughter to participate in beauty pageants, extreme-coupons, has an openly gay brother, serves her daughter "go go juice" and a steady diet of cheese puffs. And she clearly loves and enjoys her children very, very much, as they do her. June is crass and uneducated, but she is also wily and intelligent, and has an innate way with colorful, living language.

Whatever June is, she’s not some crazy perfectionist, and though I have huge personal doubts about pageant-going as a healthy, fun mother-daughter activity, she does not seem to be living out too many of her own dreams with Alana’s pageantry. Alana does seem to possess the sort of zany personality that is drawn to a stage — or, yes, a reality TV camera. That kid is a ham. She cries when she loses a pageant, but in the sort of momentary way of kids who have fallen down and get tearful from the surprise, not the hurt, of it.

Despite being the star of a reality show, Alana is not often a winner of these things, and June is supportive through all those losses. (The stank eye June gets from some of the “classier” mothers and judges during these competitions is a piece of minutiae with endless implications about class in America.)  When June coaches Alana’s routine from the seats, dancing along, it seems like the whole thing might actually be fun — but then again Alana seems just as content diving into mud puddles, and she doesn’t need a spray tan for that. At the very least, whatever pageants teach children about exacting standards of beauty is getting a serious remix in Alana’s home, where a much more forgiving ethos applies, as June proudly talks up  her own not-so-standard looks.

The most fascinating thing about "Honey Boo Boo," a fascinating, fascinating show, is Alana’s ongoing mimicry of a certain kind of African-American speech pattern. How does a 6-year-old from McIntyre, Ga., who appears to exist in an extremely white world, end up doing an imitation like this? (Why this imitation was so well received it got her a reality TV show is, well, a subject for a whole other essay.) June is, as with all things Alana, the fount here. There was a moment last night where June lapsed into that particular patois, and then the mother and daughter had a snap-off during a pageant training session. I suspect that June picked this up not just from present-day reality TV— where everyone has been so long aware of the “angry black woman” stereotype; the cast of “The Real World” talked about it in the second season—  but from that once hugely rated format, the daytime talk show. What we’re seeing here, then, is the unpredictable, viral progression of television itself: the "Jerry Springer Show” ingested, assimilated and then passed on to a small child, who is now performing some version of it on her very own reality TV show, without any awareness of its source or racial implications. Given this, who could possibly predict what “Here Comes Honey Boo Boo” will inspire?